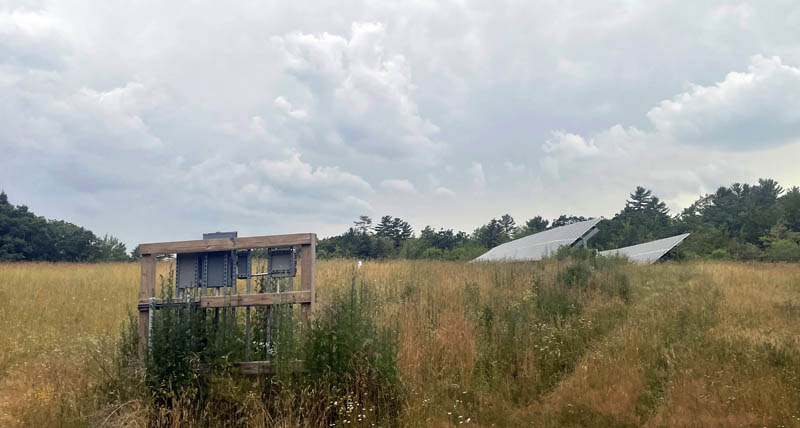 Damariscotta’s town solar array sits on a capped landfill at the corner of Biscay and Standpipe roads. The array did not produce electricity from mid-March through June due to damages not covered under warranty. (Evan Houk photo)

Damariscotta will have to pay an unknown amount for repairs to the town’s solar array because equipment that was destroyed by a rodent is not covered under warranty.

The array is now fixed and is generating electricity again after being inactive since mid-March. During that time, the town incurred higher electricity costs because it was not receiving credit from Central Maine Power Co. for the solar energy the arrays produce.

The town expended $4,644.85 more than what was budgeted for electricity in fiscal year 2021-22, largely because the solar panels were not generating power at a discounted rate promised by the power-purchase agreement with installer Sundog Solar LLC, of Searsport.

Voters authorized the select board at annual town meeting to vote to expend up to $25,000 for “unanticipated expenses and emergencies.” A total of $19,251.55 was transferred from the town’s undesignated fund balance to cover all the overages across different budget categories after the select board approved the transfer at its meeting on July 6.

The town’s public restroom budget, which includes electricity for the facilities and for the municipal parking lot electric vehicle charging stations, ran over by $2,103.96.

Other budget categories that ran over included higher expenses for advertising for a town planner and assessor, health insurance, and moderator costs for unanticipated special town meetings.

That budget also includes the costs for cleaning the restroom and the water and sewer expenses, so it is difficult to know how much extra was charged specifically for electricity, Treasurer Cheryl Pinkham said on Tuesday, July 19.

As part of the power-purchase agreement, Sundog installed and is maintaining the solar array at no cost to the town. The energy produced is measured and the town receives credit from Central Maine Power Co. The array is owned by Damariscotta Solar LLC.

The destruction of the equipment by a rodent that took the panels offline is not considered an “act of God” and is not covered under warranty, Pinkham said at the Damariscotta Select Board’s meeting on July 6.

“Right now, we’re on the hook for repairs,” Board Chair Daryl Fraser said.

The array went online in June 2020 and has been covering electricity costs for the municipal building, public restrooms, electric vehicle charging stations, and lights in town since then.

The array had been offline since mid-March of this year and was not producing energy until it was repaired a few weeks ago, leading to higher electricity costs for the town, according to Damariscotta Town Manager Andy Dorr.

“They did try to go the warranty route, which caused the delay even further,” Dorr said.

Pinkham said at the meeting that the town was never notified the array was down and she only noticed electricity bills were higher and reached out to Sundog Solar.

“I think we need to review the contract,” Select Board member Lou Abbotoni said.

Dorr said he is in the process of reviewing the contract and working out the details of the matter with Sundog.

The capped landfill and solar array site is at the corner of Biscay and Standpipe roads.