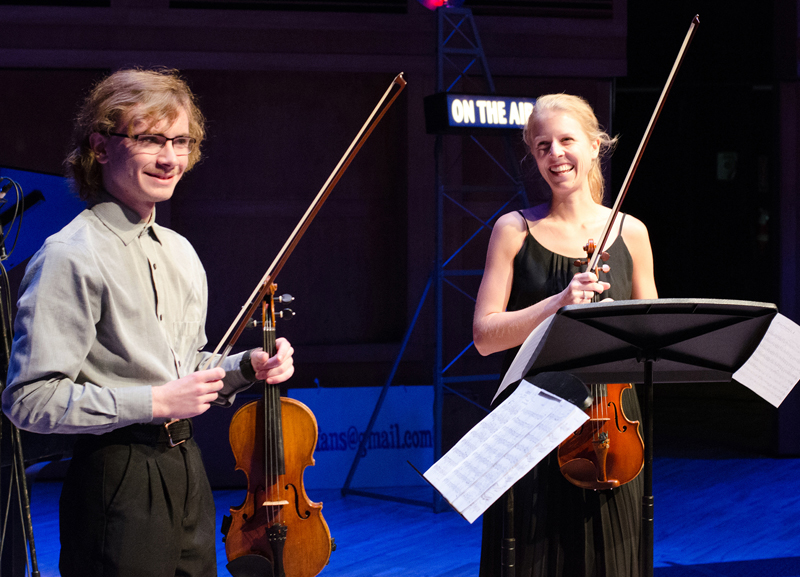 Joshua Rosenthal, a 16-year-old violinist who lives in Damariscotta, performs a duet with Josie Davis, a From the Top alumna originally from Waldoboro. The performance was recorded for the National Public Radio program, “From the Top,” at Merrill Auditorium in Portland on Nov. 20. The episode will air locally on Maine Public Classical, channel 96.7 FM, at 5 p.m. on Saturday, Dec. 21 and will be available to stream at fromthetop.org on Dec. 16. (Photo courtesy “From the Top”)

Joshua Rosenthal, a 16-year-old violinist living in Damariscotta, will get national exposure when one of his performances begins airing on the National Public Radio program “From the Top” during the week of Dec. 16.

The episode featuring Rosenthal’s violin duet with Josie Davis, a “From the Top” alumna who is originally from Waldoboro, will air on Maine Public Classical, locally transmitted from Boothbay Harbor on channel 96.7 FM, at 5 p.m. on Saturday, Dec. 21.

The performance was recorded in front of a live audience at Merrill Auditorium in Portland on Nov. 20. The program will be airing on over 200 participating stations around the U.S. during the weeks of Dec. 16 and Jan. 6. It will also become available by podcast or for streaming at fromthetop.org on Dec. 16.

According to Rosenthal, the piece he performed, “Limerock,” is a traditional folk song arranged in a classical manner by violinist Mark O’Connor. Rosenthal said O’Connor plays the fiddle and jazz and classical violin.

The piece happened to fit Rosenthal’s musical interests perfectly, since he also plays both the classical violin and the fiddle. He said he focuses mostly on playing classical music, but also enjoys playing traditional Maine, Irish, and French-Canadian folk tunes.

Rosenthal began studying under Kaity Newell, who founded Maine Fiddle Camp in Montville with her husband, Carter Newell, and has been teaching fiddle for more than 30 years, when he first moved to Maine from Maryland at the age of 5. He said he discovered Newell while looking for a violin teacher who taught using the Suzuki method, a way of teaching violin that emphasizes playing by ear.

Rosenthal trained under Newell for six years, learning to play both classical and folk music.

“When I did my lessons with Kaity, half the lesson would be traditional Suzuki method violin playing, and then the other half we’d do some traditional music, like folk music. I got the best of both worlds,” Rosenthal said.

Rosenthal said it is unusual that the first instrument he learned to play was the violin, since most violinists start out playing the piano.

“I just went right into it. I’ve always liked the sound of the instrument and I was always obsessed with watching videos of violinists when I was 5,” Rosenthal said.

He said the first three or four years learning the violin were the toughest, describing what a tricky instrument the violin is to pick up. “I never feel like I’ve actually mastered it. I always feel like there’s something that can be improved,” Rosenthal said.

He also plays the viola, which is very similar to the violin. The viola has a bigger body and is restrung with different strings, Rosenthal said.

Rosenthal said he has also started playing the guitar a little bit and hopes to one day begin playing the bass guitar.

Rosenthal is serious about playing music and hopes to turn it into a career someday.

He started studying music at the New England Conservatory Preparatory School in Boston in 2016 and currently performs three or four concerts each year as a violinist and concertmaster for the school orchestra.

He would like to become a professional musician playing chamber music in smaller ensembles, like string quartets or piano trios. He plans to attend college to study music, saying he has heard good things from friends about Oberlin College in northern Ohio.

Rosenthal said he was surprised and excited when he learned that he was chosen to be featured on the national program “From the Top.”

“I’m so humbled that they picked me out of all these amazing musicians across the United States to be on this show,” Rosenthal said. He said the taping of the show was a weekend-long event in Portland that included community outreach and leadership training.

Rosenthal said the musicians visited The Iris Network in Portland, which is dedicated to rehabilitating and housing blind and visually impaired individuals.

“It’s really nice as a musician to have those tools,” Rosenthal said of the leadership training.

Rosenthal said classical musicians should keep an open mind in order to broaden their horizons as musicians, emphasizing that music is meant to be a unifying force.

“As a musician, I feel like music can really help bring people together in the times that we’re living in now. … Music is a universal language,” he said.