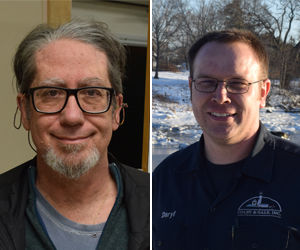 Damariscotta voters will choose between two political newcomers to fill an open seat on the board of selectmen in a special election Tuesday, March 3.

Both candidates, Daryl Fraser and William “Zev” Keisch, described the election as a unique opportunity to test the waters of municipal government for an abbreviated term.

The open position is the result of Amy Leshure’s resignation last October, due to a move out of town. The roughly four-month term will expire June 30, 2020.

Fraser was born and raised in Damariscotta and his family goes back at least three generations in town. He attended Great Salt Bay Community School and graduated from Lincoln Academy.

“I haven’t ventured too far,” Fraser said with a chuckle in a Feb. 21 interview. “In high school, I never felt like I needed to get away. I liked it here and knew where I wanted to be.”

He learned how to repair cars on the job at Colby & Gale, but said his biggest education was in public relations, which he believes has prepared him for work in town government.

“The repair side’s easy. I’ve learned a lot more about customer relations and dealing with people, and it’s been fun,” Fraser said.

On the decision to run for selectman, Fraser said he felt it was time to get involved and give back to the community.

“This community and the town, and the people of this town, have been really good to myself and my family,” he said.

Fraser said he has no particular agenda or preconceived notions, but would just be happy to be part of the democratic process.

Fraser said he doesn’t picture ever living anywhere else, saying he likes the “community feel” of Damariscotta.

When he is not working at the downtown service station, Fraser enjoys spending time with his wife, Darcy, and two daughters, 11-year-old Carmella and 8-year-old Aysel. He is an avid reader of U.S. history books and likes discussing and swapping books with customers at the service station.

“My hope is that I can get in and learn some things and be productive and constructive, and maybe stay on, and see where it goes from there,” Fraser said.

William “Zev” Keisch has been living in Damariscotta with his wife, Sharon Gordon, since 2016, when he retired from a position at Bond New York as director of a training program for real estate agents in Manhattan.

Keisch said in a Feb. 20 interview that he and his wife were searching for a place to retire in New England when, after a few summers of vacationing in Boothbay Harbor, they decided on Damariscotta. They then sold multiple properties they owned in New York.

Keisch expressed interest in the short selectman’s term, a good chance to try his hand at town government and see if the job is one he would be interested in pursuing long term.

“My plan is to do a lot of listening. My understanding of the job is that as a town selectman, I’m helping to administer the law,” Keisch said.

Keisch worked briefly as District Attorney Natasha Irving’s campaign manager from July to October of 2017, “before she hired a real pro,” he said.

Keisch grew up in Pittsburgh and attended Carnegie Mellon University, where he studied psychology.

He moved to Texas shortly thereafter, where he received certification as a trainer from a government program during the Carter administration.

He eventually became a real estate agent trainer in Manhattan, where he worked until his retirement and move to Damariscotta with his wife.

“I love Damariscotta, not just the physical beauty; I love the people, despite not always agreeing with them. In the end, I understand everybody has a point of view and it’s just as valid as mine and we can have a discussion and find out where we agree on things,” Keisch said.