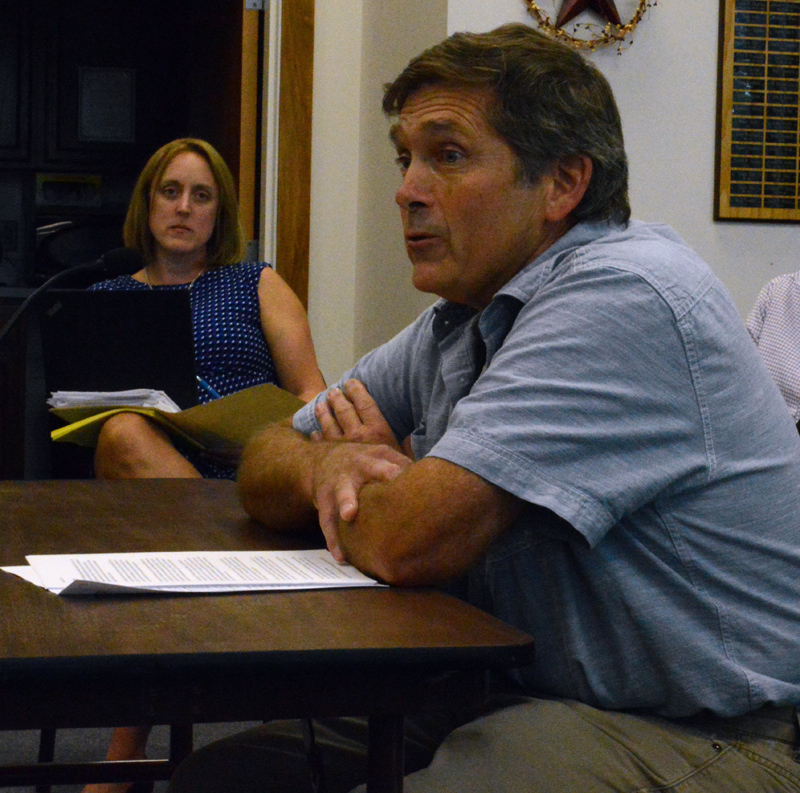 Damariscotta will make minor adjustments to its draft medical and “adult use,” or recreational, marijuana ordinances after a first public hearing Aug. 28.

Town Planner Bob Faunce and two residents made comments at the hearing. The selectmen then held a special meeting to direct town staff to make changes to the drafts.

There will be at least one more public hearing on the ordinances, at the town office at 5:30 p.m., Wednesday, Sept. 4, before they go to a secret-ballot vote Nov. 5.

Robin Mayer, chair of the board of selectmen, said the board will keep the security requirements for establishments, which are stricter than those in the state’s marijuana law, the same.

Associated amendments to the town’s land use, site plan review, and sign ordinances were also considered at the hearing.

Buzz Pinkham, owner of Pinkham’s Plantation and a licensed medical marijuana caregiver, spoke first, expressing concern about whether he will be allowed to treat his patients in the rural district under the current draft of the medical ordinance.

“The reasoning for my interest in a caregiver retail store is not from a profit basis, but from a wellness issue,” Pinkham said.

The selectmen told Pinkham that registered caregiver retail stores are currently listed as approved for conditional use in the C2 (other commercial) and rural districts.

Conditional use means stores must meet zoning requirements and have planning board approval before they open.

Pinkham asked if the state came up with a definition for registered caregiver retail store. Town Manager Matt Lutkus and Meader said the state has provided a definition, signed into law June 8.

“That’s one of my recommendations this evening is to use the state definition,” Lutkus said.

Mary Trescot, a county commissioner who lives in Damariscotta, addressed the selectmen, talking about how medical marijuana helped her sister with sleep.

Faunce then said he is of the opinion that recreational and medical retail stores should be in separate zones.

“I have no issue particularly with marijuana, but from a zoning perspective, a land use perspective, I’m kind of conservative. I’m a little concerned about the reputation of Damariscotta, in the sense that between Brunswick and Eastport, Damariscotta’s the only coastal town that will allow, at this point, adult use retail stores,” Faunce said.

“I would like to see other towns catch up along the coast,” Faunce said.

Lutkus said Camden has opted in only for marijuana cultivation so far, not retail sales.

Pinkham said he thought Boothbay Harbor had opted in for both recreational and medical marijuana retail. Faunce said that, according to the Maine Municipal Association, it has not.

“To me, it makes more sense, if you’re selling something, to be more visible. You know, in a commercial strip rather than a neighborhood,” Mayer said.

Pinkham asked if Mayer was referring to adult use and Mayer said she was.

“A lot of your medical is by appointment,” Pinkham said, referring to how he and other medical marijuana caregivers operate.

Lutkus referenced the medical marijuana storefront currently operating downtown, Greenport Cannabis Co., saying the license will be grandfathered but the company will have to adhere to all the rules in the new ordinances.

No new marijuana-related facility will be permitted to operate in the downtown district under the current draft of the land use ordinance amendment. This includes both types of retail stores and manufacturing, testing, and cultivation facilities.

There will be one other medical marijuana retail establishment license available, according to the current draft of the ordinance, for a total of two in the town.

There will be three licenses available for medical marijuana manufacturing facilities.

Under the current recreational marijuana ordinance, two retail licenses will be available.

There will be a total of nine licenses available for recreational cultivation facilities, three nursery licenses, and three licenses for manufacturing facilities.

According to Lutkus, state law does not give the same authority to license and zone medical cultivation facilities as the town has for the other establishments.

Lutkus said in an email that medical marijuana cultivation facilities will be permitted in town, but under state law, the town cannot limit what zones they are in, how many are allowed, or even whether they receive a license from the town.

He said these facilities will still be subject to review under the town’s site plan review ordinance.

There is no limit on marijuana testing facilities in either ordinance.

Home cultivation of marijuana will be permitted in the general residential, C1 (downtown), C2, and rural zones.

Lutkus said that under state law, no one will be able to own multiple marijuana shops in different towns.

“It’s not like some states, where a big company can come in and set up multiple stores,” Selectman Louis Abbotoni said.