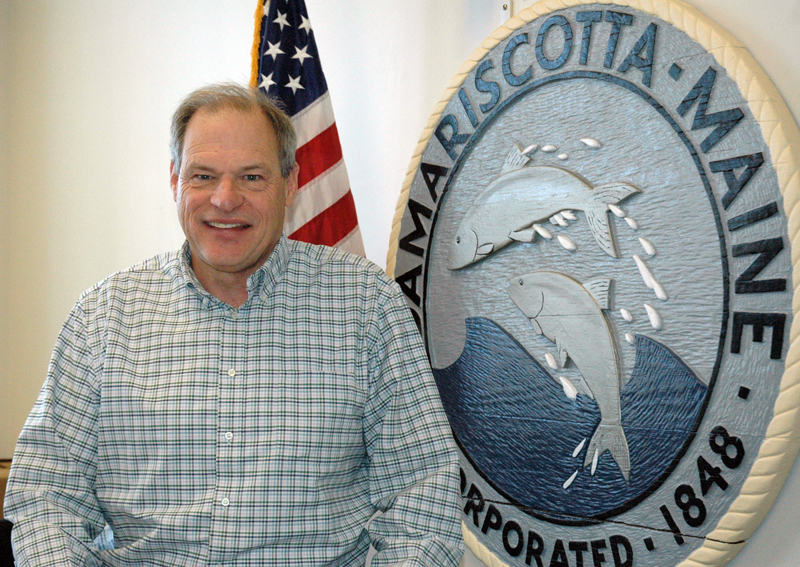 Damariscotta Town Manager Matt Lutkus in 2015 following his announcement to the selectmen of his intention to retire in 2016. He will be officially retiring from the town manager position on April 7 this year. (LCN file photo)

Damariscotta’s town manager, Matt Lutkus, announced that his last day working for the town will be April 7, in an email to the board of selectmen on Feb. 6.

Lutkus previously indicated to the board that he intended to retire on June 30. However, he will be taking advantage of a contract provision that allows him to leave with 60 days’ notice to pursue a position as a Maine kayak guide after 46 years in municipal government.

“I have received a job offer from a kayak and canoe outfitter to lead kayak trips this coming season. The offer is contingent on my obtaining my Maine Guide License. I want to focus on that and, for the first time since I have lived in Maine, I will have my fleet of kayaks, canoes, sailboats, and rowboats ready to launch as soon as the ice melts,” Lutkus said.

In his remaining two months as town manager, Lutkus will work with the town to finalize the budget for the 2022-2023 fiscal year, complete the annual town meeting warrant, and wrap-up time sensitive projects.

“I take great pride in what the Damariscotta staff team has accomplished during the past decade. Not only have we been able to complete key projects that were in previous decades only much-talked-about goals, we have established Damariscotta as a very progressive local government that has become a model for others to follow,” he said in his letter to the selectmen.

Prior to Lutkus’ announcement, the selectmen reviewed a draft of a town manager search timeline, position description, and advertisement at its meeting on Feb. 2.

The board is working with Don Gerrish, a municipal consultant with Eaton Peabody Consulting Group, to facilitate the town’s recruitment and hiring process.

According to the draft timeline, Gerrish will advertise the position beginning on March 1, with a deadline for applications on March 29.

Selectmen will begin to interview candidates between April 4 and April 7, and the town will announce the new manager and their start date between May 9 and May 13.

In an email on Feb. 7, Board of Selectmen Chair Daryl Fraser said that the hiring timeline will most likely not be affected.

“The process involves sufficient amount of time for input, ad placement and acceptance of applications, interviews and candidate vetting processes. Each step requires a certain amount of time to complete and we would be remiss not to do our due diligence,” Fraser said.

According to the draft advertisement created by Gerrish, the town is seeking applicants with a bachelor’s degree in public administration or a master’s in a related field. Additionally, the advertisement recommends that applicants have a minimum 5 years experience in municipal management.

Gerrish will hold a public session with residents at 5 p.m. on March 1 at the town hall to get a sense for what officials and citizens are looking for in a new town manager. Additionally, Gerrish said that he would like to have meetings with the town’s department heads.

He also asked selectmen for a salary range to include with the advertisement. In response, Selectman Mark Hagar asked what kind of yearly salary comparable towns in the state offer their town managers.

Lutkus said that his yearly salary, which is readily available on the town’s website, is $83,000.

The project, which has been estimated to cost upwards of $4.2 million, will include a subsurface stormwater drainage system beneath the rebuilt parking lot, a pedestrian walkway, a flood wall, and a park on the side of the wall facing the water.

The goal of installing a flood wall is to remove the downtown and many businesses from the Federal Emergency Management Agency’s 1% annual chance special flood hazard area and reduce insurance costs.

In accordance with advice from the Economic Development Administration, the town will likely take a phased approach to the project in case the town’s funding falls short, where the flood wall and other flood resiliency improvements could follow the installation of the drainage system and parking lot repairs.

With the 95% design complete, Wiegman said that Wright-Pierce will begin applying for permits with the Federal Emergency Management Agency, the Department of Environmental Protection, and the Army Corps of Engineers.

The town will begin the bidding process in about three months after the permitting process is complete. According to Wright-Pierce’s estimated timeline, construction on the parking lot should begin in the fall and be completed sometime in 2023.

Hagar said that the project’s timeline and cost may be significantly impacted due to market limitations on the availability of vital materials.

“I’ve been very impressed,” Faunce said. “I’m very comfortable with the work they’ve done. It’s a great project and I… am very, very anxious to get this thing out to bid and find out where we are on cost.”

Damariscotta has taken another step towards securing an $86,800 grant to make significant drainage improvements to a 400-foot stretch of Hodgdon Street.

Lutkus sent a letter of intent to the Maine Department of Economic and Community Development on Jan. 20 indicating the town is interested in applying for an $86,800 community development block grant for public infrastructure development to benefit low- and moderate-income residents.

The department’s Office of Community Development responded to Lutkus’ letter on Feb. 3 indicating that the project meets the community development block grant requirements and that Lutkus should prepare and send a completed application to the office by March 25.

If the funds are awarded to the town, Lutkus estimated that work on the road could start as early as fall 2022 or spring 2023.

The public will vote on three substantive articles. The first asks voters to approve the exchange of two approximately 179-square-foot parcels with Gilbert Gay LLC; the second asks for an appropriation of $227,179.59 in American Rescue Plan Act funds for a variety of town expenditures, and the third asks for approval of a $2.25 million bond issue for road repairs.

Damariscotta Board of Selectmen will hold its next regular meeting following the special town meeting. A livestream and recording of the meeting will be available on the town of Damariscotta YouTube page.