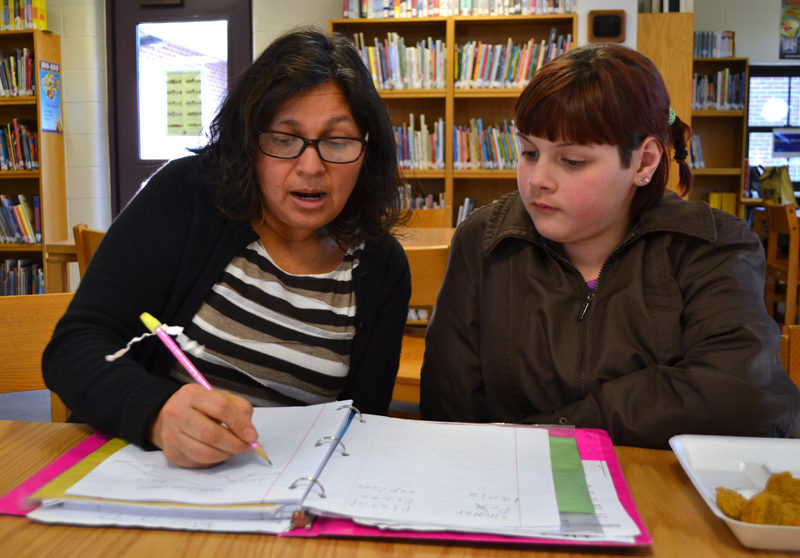 Every Monday and Tuesday, a group of students at Great Salt Bay Community School  willingly gives up their recess to learn a new language.

Lissette Griffin, of Damariscotta, teaches Spanish to students in grades three through eight in the library during the lunch and recess period. Students bring their lunch to the lessons.

Griffin, originally of Guatemala, said she volunteers her time because she enjoys having the opportunity to teach students the language.

Griffin uses a variety of tools and techniques to help the students learn how to communicate effectively. During one lesson, she asked the 10 third-graders in the session if they had any cats or dogs. The students each had to respond with “Yo tengo” (“I have”) followed by the number of dogs and cats they have. 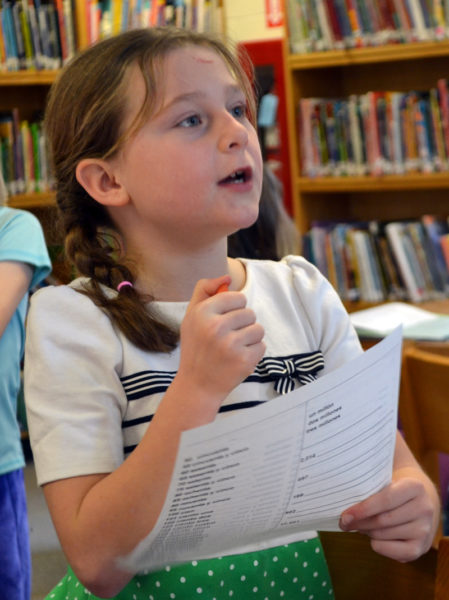 Great Salt Bay Community School third-grader Amelia Starbird calls out the answer to a math problem during a meeting of the Spanish club in the school library Monday, Jan. 29. (Maia Zewert photo)

Occasionally, Griffin would ask the students additional questions, including whether their dog was big or small or what color their cat was. Using worksheets from previous meetings, the students were able to respond correctly.

“Spanish is easy to learn. You can know the words, you can write the sentences, you can read the words. The hard part is the communication, the back and forth,” Griffin said. “It gets easier as you repeat it and go through the repetition. It’s about starting small and simple, and then building on what they already know and adding more to it.”

During the duration of the one-hour meetings, Griffin speaks almost exclusively in Spanish, save for occasional instructions and clarifications. To call for students’ attention, she says “escuchan,” which means “listen.” To move everyone across the room for a story or a song, she says “vamos aqui,” which translates to “let’s go here.”

Griffin taught the students a song in Spanish to help them learn the parts of the body. Every time they sing a word for a part of the body, the students point to that body part. Griffin sang every word of the first few verses of the song, but as the students became more confident, she stopped singing and let them finish the verse on their own.

Each student is required to have a binder for Spanish club where they keep notes about what they have learned. The binders are split into three categories: gramática (grammar), matemáticas (mathematics), and ciencia (science).

For the younger students, Griffin teaches the “building blocks” of Spanish, such as how to identify whether a word is feminine or masculine, plural or singular. As the students get older, the lessons get more complicated.

“The seventh- and eighth-graders do something similar to this, but their sentences are more complicated and there’s more to them, just because they know more,” Griffin said.

The older students are learning the lyrics to a One Direction song in Spanish, Griffin said. The students have the translated words to the song, which they follow along with as the song plays. 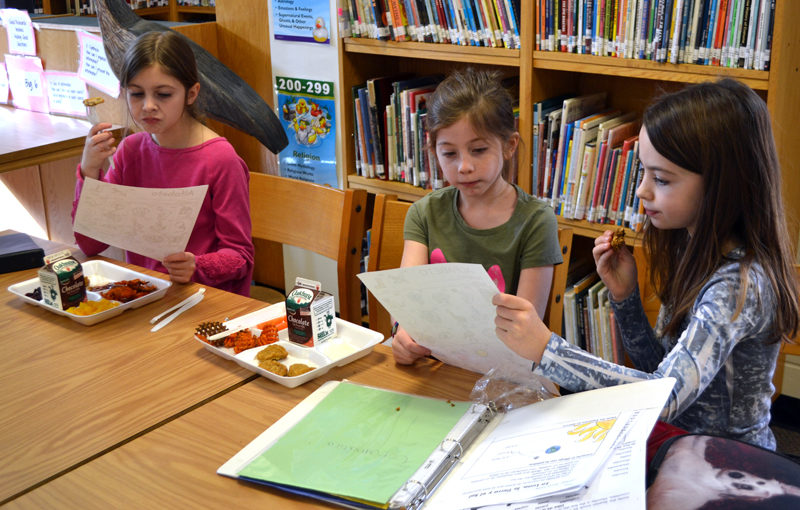 “What I’ve found is that students are more likely to stay interested and pick it up if it’s something they like,” Griffin said.

As a volunteer, Griffin provides the students with a chance to learn Spanish at school. GSB does not offer foreign-language classes.

“For many years, members of the GSB school community have expressed an interest in offering our students a foreign-language program,” GSB Principal Kim Schaff said. “Given this interest, I am grateful that Lissette has volunteered to teach our students during their lunch times. Each week, she is sharing her enthusiasm and love of the Spanish language and expanding the education of our students.”

Attendance varies based on the students’ commitments during the time, Griffin said. As the weather gets warmer, she said she won’t be surprised if more students decide to go outside rather than stay in the library.

With all the activities the students go through, Griffin said many of the students remark about how quickly the hour goes by.

“A lot of them say, ‘Oh, this went by really fast,’ and that tells me they’re having fun,” Griffin said.