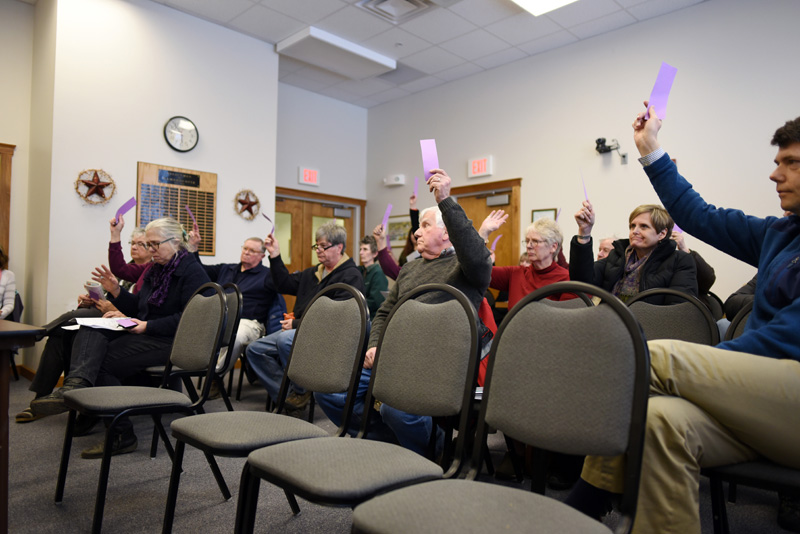 Damariscotta residents vote to approve the purchase of the barbershop site for new public restrooms during a special town meeting at the town office Wednesday, March 21. (Jessica Picard photo)

Damariscotta residents voted to approve the purchase of the barbershop site in the municipal parking lot for the site of new public restrooms during a special town meeting Wednesday, March 21.

The town meeting was preceded by a public hearing, which Town Manager Matt Lutkus opened by explaining the plan for the restrooms to those in attendance.

“We’ve been getting lots of feedback from folks on what the restroom should look like and what should be included,” Lutkus said.

Some suggestions have been a lower roofline, the removal of a cupola, the addition of a drinking fountain, and the removal of the harbor master’s office, due to size concerns.

Lutkus suggested that a town seal be placed where the harbor master’s office window would have been.

The design of red brick with a granite base has been popular, according to Lutkus.

The original plan called for four individual unisex stalls, however, after consideration and discussions with both Police Chief Jason Warlick and Fire Chief John Roberts, Lutkus instead suggested women’s and men’s rooms with multiple stalls in each.

“The overriding concern is related to public safety. The individual locking rooms provide more opportunity for drug use and illicit activity,” Lutkus said.

Individual rooms would not allow for periodic checking of the restrooms by parking enforcement officers, police officers, and other town staff, and the staff “might have no way of knowing if there is a person in distress,” Lutkus wrote in an email to the selectmen March 17.

The restrooms will be 3 feet above the existing elevation, and will be waterproofed 2 more feet, according to Lutkus. “It’s going to be well above the flooding we have seen to date,” Lutkus had said at a planning board meeting March 5.

The cost of construction will not be known until a design is finalized, however, $60,000 was already approved, as well as $11,000 in capital reserves, by voters at the November 2016 town meeting.

“The balance of the cost, whatever that ends up being, will be covered by commitments from individual donors. Currently in the bank the town has $423,000 for the restroom and other improvements to the waterfront,” Lutkus said.

Lutkus said the town has received $285,000 in private donations for the restroom.

“It’s amazing that so many folks have come forward and have been interested in this project,” Damariscotta Board of Selectmen Chair Robin Mayer said.

Multiple residents then came forward to speak in favor of the plan.

“I want to congratulate the selectmen for coming up with this plan. I think it’s excellent,” David Belknap, who used to own a business adjacent to the barbershop and is a member of the waterfront project committee, said.

Belknap said he especially appreciates the move to the barbershop location from an earlier site, as it will not lead to the elimination of valuable parking spaces.

The plan is “very thoughtful on the waterproofing and the approach to the flood zone,” Hufnagel said. “I just wanted to highlight that and thank you for that consideration, as an example of what good planning can be in the flood zone.”

Jim Cosgrove moderated the town meeting, and the purchase of the barbershop site was approved with little discussion.

The town will buy the property from Dan and Eileen Miller; demolish the building, home to Bruce’s Barbershop for 36 years; and make improvements to the site. The barbershop will reopen in a space at 752 Main St., near the intersection with Route 1.

The next step for the restroom will be a site plan review with the Damariscotta Planning Board, scheduled for 6 p.m., Monday, April 2 at the town office.

The ordinance previously required that structures’ lowest floors be elevated 3 feet above the base flood elevation.