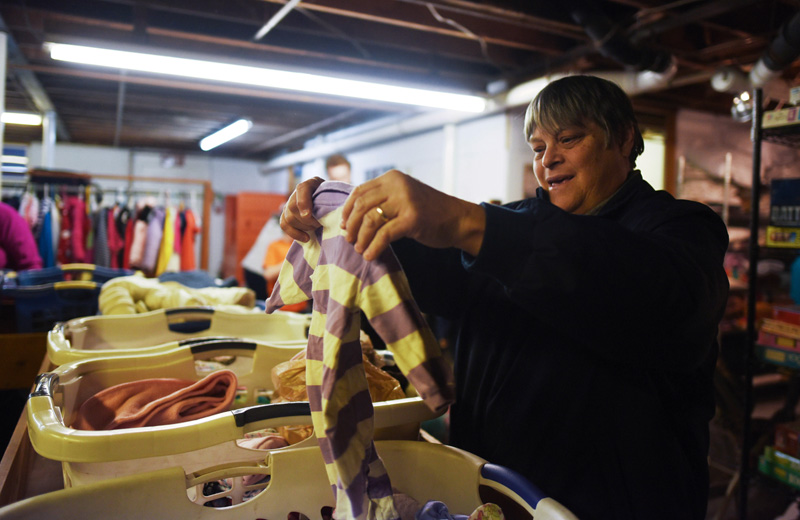 People to People, the nonprofit in the basement of the Damariscotta Baptist Church that collects and distributes clothes and other items to local people in need, is celebrating its 50th anniversary this year.

The door to People to People opens at 4 p.m. every Monday and closes two hours later. Everything in the space is free to take.

A couple of women started the organization out of a garage on Vine Street, across Main Street from the church, in 1968, according to Aaron Donaghy, president of People to People’s board.

The identities of the women are unknown and the program’s written history states only that local churches took on the work, Donaghy said. People to People moved into its current location in the 1970s.

Damariscotta resident Shirley Tibbetts first began volunteering at People to People around 44 years ago, after her house burned down. She continues to organize volunteers and manage the operation today.

“They helped me so I figured I’d help them,” she said. “It just helps a lot of people.” 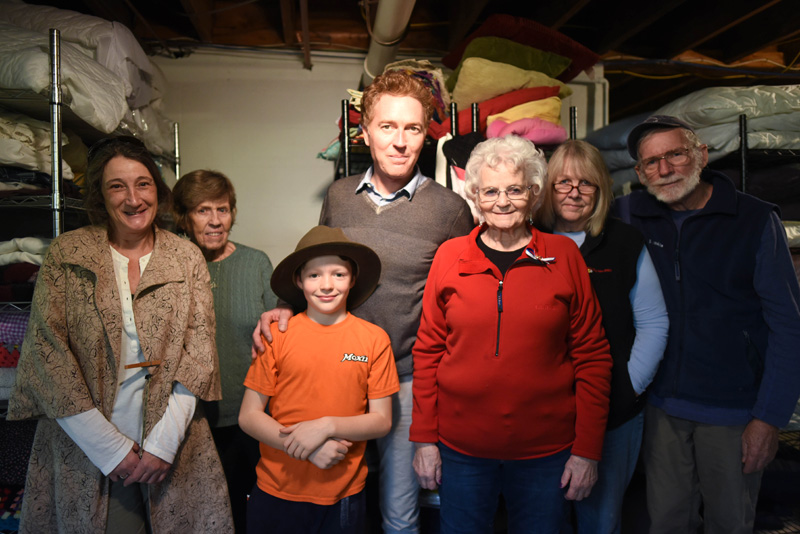 Some items, such as blankets and sheets, are set aside specifically for emergencies, such as when someone loses their home, according to Tibbetts.

“What you need, we have,” Tibbetts said.

About a dozen volunteers staff the organization, according to Donaghy, including a few children. The volunteers arrive around 2 p.m. Monday to sort donations before the doors open.

Donaghy’s 10-year-old son, Atticus, has been volunteering at People to People for around four years.

“I like checking out the things people bring in,” he said, showing off a bright pink pogo stick that had been donated that week.

“We don’t judge anyone that comes in the door,” Donaghy said. 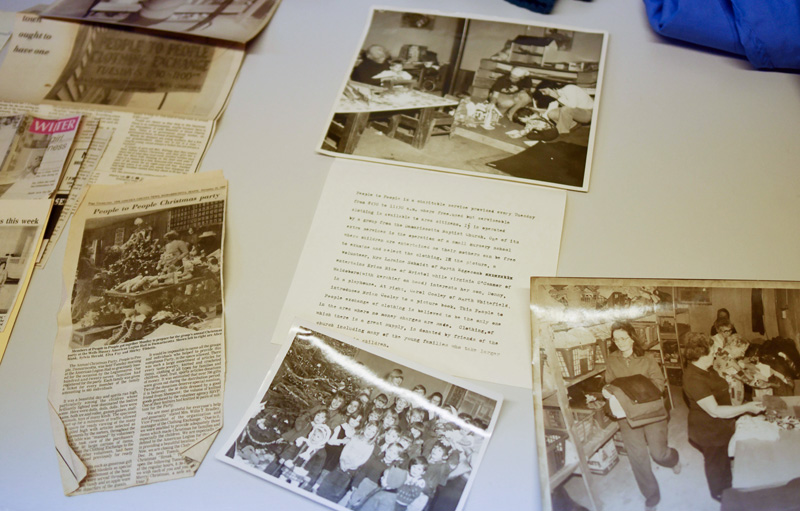 Old newspaper clippings and photos tell the story of People to People, which is celebrating its 50th anniversary this year. At bottom right is an undated photo of Shirley Tibbetts, who now runs the service. (Jessica Picard photo)

People to People does not screen its clients and there are no forms to fill out or income requirements.

Clients are asked to write down their name and town of residence so the program can see how many people from each town are coming.

“It’s a wonderful place to have,” said Beverly Elwell, of Wiscasset, as she looked through a bin of baby clothes.

She said she tries to find things for her grandchildren, as well as people in her community who could use some extra help, such as a mother recently diagnosed with cancer.

People to People currently serves around 50 families a week, according to Donaghy.

Jennifer Dyer, of Warren, said she tries to come once a month to get clothes for her daughter, then donates them back when she grows out of them.

Dyer recently moved after going through a divorce.

“We are restarting,” she said. She said she is thankful People to People is there. 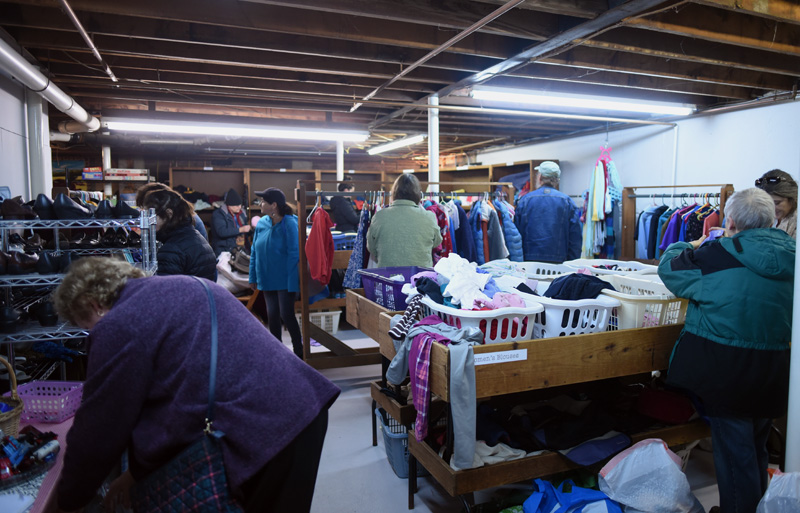 Shoppers at People to People, in the basement of the Damariscotta Baptist Church, Monday, Dec. 3. (Jessica Picard photo)

Donaghy said he would like to see more teenagers and families come in.

“We would like people to bring their families and friends. There’s more than enough,” he said.

People to People will celebrate its anniversary with an open house Monday, Dec. 10.

The public can visit and see the space from 3-4 p.m., then it will open for its normal hours until 6. FARMS at the Y will serve food.

Donations can be left anytime on the stairs through the rear door of the church, which has a picture of a black button on it. Tibbetts said children’s clothes are in high demand.

Tibbetts invites anyone who needs something immediately to call her at 563-5511.

“People to People is a warm, welcoming, and open space for all. It has an easy feel and it’s fun to shop,” Donaghy said.