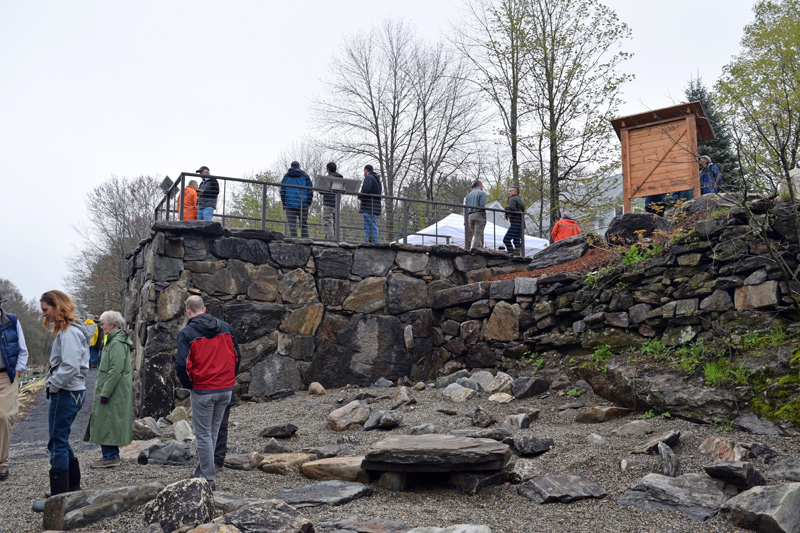 Visitors explore the former Coopers Mills Dam site after the dedication Monday, May 20. The base of the overlook incorporates stone from the dam. (Jessica Clifford photo)

Local, state, and federal partners celebrated the completion of their project at Coopers Mills Dam, which will improve fish passage and fire protection, Monday, May 20.

The project consisted of four components: removal of the dam, installation of three new dry hydrants, improvement of public access, and preservation of the site’s mill history.

“I think the outcome you see today respected the history, respected the different interests in the town, and it met a lot of goals. We are pleased for this to happen,” Andy Goode, vice president of U.S. programs at the Atlantic Salmon Federation, said at the dedication.

Goode presented Whitefield Selectman Charlene Donahue with a $7,500 check for the ongoing maintenance of the site.

The Coopers Mills project is the first in a multiple-year effort to improve habitat for endangered Atlantic salmon, alewives, shad, and other sea-run fish species in the Sheepscot River.

“The Sheepscot River is now the southernmost river in the United States with a native population of Atlantic salmon that still spawns in the wild,” Matt Bernier, a civil engineer with the National Oceanic and Atmospheric Administration, said during his speech at the dedication.

The next phases of the project will include the modification of the Head Tide Dam in Alna this summer, construction of a new fish passage at the Branch Pond Mill Dam in China in 2020, and other potential fish passage projects.

Over the next three years, Goode said the Atlantic Salmon Federation, Midcoast Conservancy, The Nature Conservancy, and their partners will invest over $3 million in the two scheduled projects and potentially others.

The site of the former Coopers Mills Dam now has an overlook surrounding new landscaping and a trail down to the water. Rock from the old dam was repurposed to line the base of the overlook, while metal fencing is in place for safety.

Two informational placards are on the overlook and a large shaded placard with historical information about the Coopers Mills village stands nearby.

The construction costs for the project totaled $567,000, according to a press release from Midcoast Conservancy. All of the work was completed at no cost to Whitefield residents.

Funding for the project came from multiple private and public sources, including NOAA’s Community Habitat Restoration Program, the U.S. Fish and Wildlife Service, The Nature Conservancy, Patagonia, the Elmina B. Sewall Foundation, and others. Maine’s congressional delegation secured funding from the federal agencies.

The Coopers Mills Dam was built for a mill, one of 12 mills built on the Sheepscot River in the late 1700s, according a placard at the site. The dam itself was built in 1804, with a mill on each side of the river.

Herb Hartman, a member of previous town dam committees, said that 21 years ago the Sheepscot River Watershed Council identified the leaking dam as a concern for fish passage and adequate year-round water for the fire department.

In 2007, after a six-year-long engineering study, Trout Unlimited and others proposed a plan to remove the dam, Hartman said.

However, voters rejected the proposal at town meeting due to concerns the dam’s removal might prevent possible hydropower generation, lower water levels in Long Pond, and compromise the aesthetic and historical values of the village.

During the same town meeting, voters turned down a request for a “fairly significant” appropriation to repair the dam.

“It soon turned out that it was not possible to do a very low-cost repair,” Hartman said during his speech at the dedication.

In spring 2015, representatives from the Atlantic Salmon Federation and the Sheepscot Valley Conservation Association approached the selectmen and asked them to reconsider options to repair or remove the dam.

The selectmen created a dam committee, chaired by Tony Marple, former chair of the board of selectmen. With its membership of residents and representatives from the two organizations, the committee researched options for the dam to prepare recommendations.

Hartman said that after roughly a year of monthly meetings, the group realized the cost of the repair would be too high for the town’s taxpayers.

According to a press release from Midcoast Conservancy, the leaks in the dam made the fishway and fire hydrant inoperable during the summer.

The Atlantic Salmon Federation and the Midcoast Conservancy, the successor to the Sheepscot Valley Conservation Association, presented a proposal to remove the dam, with other benefits included.

The dam committee unanimously approved the proposal, as did the selectmen. Whitefield voters approved it at town meeting in March 2016.

Another committee formed after the project was approved to work on the landscape and signage design, Goode said.

Work to remove the dam began in July 2018, and the work was completed last fall.

“It was incredibly special to be out here last summer during construction,” said Bernier, the NOAA engineer.

“This is what I consider a win-win-win,” Hartman said of the results of the project.

The project required the partners to receive local, state, and federal permits for construction.

The Atlantic Salmon Federation worked on the final design for the project with an engineering team led by Mike Burke, of Inter-Fluve Inc., with assistance from James W. Sewall Co. and Kleinschmidt Associates.

SumCo Eco-Contracting LLC won the construction bid and received assistance from Linkel Construction Inc. with the stone and wall work.

Maranda Nemeth, of Midcoast Conservancy, was the on-site project manager for dam removal.

After the dedication, Nemeth said she is “pleased” with the project and “looking forward to the projects to come.”

“It wouldn’t have been able to happen without that trust built amongst the partners – the town, community, federal agencies, state agencies, and nonprofits,” she said.

Donahue spoke on behalf of the Whitefield Board of Selectmen.

“One of the things about doing something like this is, it’s change. This dam has been here a long time,” Donahue said. She said many residents of Whitefield and its Coopers Mills village have visited the dam their entire lives.

“It’s hard when something goes away,” she said. “Hopefully the things that have replaced it will, over time, ease that angst and sorrow to see the dam go out, because now we are helping a number of species that haven’t been able to go up and down this river and live their lives the way they should.”

Donahue said the project gives adequate water for fire safety through the installation of fire hydrants.

“That’s not only a win for Whitefield, but for Windsor, Somerville, and Jefferson, who all use this site as well,” she said.

While Goode gave the check to Donahue during his final comments at the event, he said the partners have an ongoing commitment to and responsibility for the project.