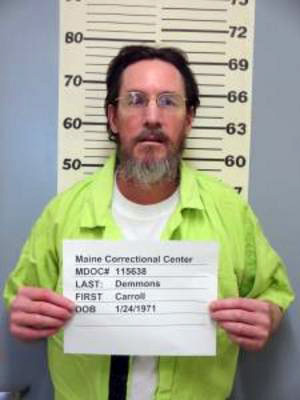 A former Newcastle man pleaded guilty to the July 17, 2017 robbery of Camden National Bank and received a sentence of three years and nine months in prison Monday, Feb. 26.

Carroll B. Demmons, 47, pleaded guilty to class B robbery and class C theft by unauthorized taking or transfer during a hearing at the Lincoln County Courthouse in Wiscasset. Demmons previously attempted to rob the same bank in March 2012.

Demmons must pay $3,125 in restitution to the bank. His probation conditions bar him from any Camden National Bank location, prohibit contact with any bank employee, prohibit his possession or use of dangerous weapons, and require him to submit to random searches to ensure compliance. He must also undergo a mental health evaluation.

A court appearance regarding victim compensation fees was scheduled for 30 days after Demmons’ release.

The class B and C charges carried maximum sentences of 10 years and five years in prison, respectively.

District Attorney Jonathan Liberman presented the court with evidence the state would have presented if the case had gone to trial.

Liberman detailed the bank robbery and the investigation over the course of the roughly 24 hours between the robbery and Demmons’ arrest.

Liberman said that on the afternoon of July 17, a thin, white male, 30-40 years old, entered the bank wearing a nylon stocking over his face.

The man passed a note to a teller saying “put the money in the bag quietly and swiftly,” according to an affidavit by Rollins.

A bank teller said the man made a gesture with his hand, pointing it like he had a gun, according to Liberman.

Liberman said the man left on foot through the bank’s front door, which he had propped open with a tree limb, cut across the business’s parking lot, and ran into the woods.

A K-9 unit from the Maine State Police tracked Demmons from the bank parking lot into the woods and along a snowmobile trail to a Central Maine Power Co. substation next door, where the dog lost the scent.

Investigators interviewed a series of witnesses who placed a unique car in the area of the substation around the time of the robbery, according to Liberman.

Liberman said that Rollins, “on a hunch,” went to see where Demmons was living based on Demmons’ involvement in the March 2012 attempt on the bank.

Liberman said Rollins located a vehicle matching the description of the car parked by the substation at the apartment in Newcastle where Demmons was staying.

Rollins conferred with the landlord, who had been in the process of evicting Demmons for nonpayment of rent, but received a cash payment from Demmons late in the afternoon on the day of the robbery.

Liberman said Rollins, while at the building, saw Demmons come out of his apartment and get into his car with “a large wad of cash in his hands.”

Rollins proceeded to speak with Demmons, who acknowledged his recent payment of his back rent.

During a search of Demmons’ vehicle, cash and a shirt matching the description of the one worn by the suspect during the bank robbery were found.

After deputies detained Demmons, he went into his apartment, saying he needed to use the bathroom.

In the apartment, Mitkus, who was then with Demmons, said he “palmed something and threw it over the top of the shower,” according to Liberman. A roll of $20 bills was then found in the shower.

A subsequent search warrant executed at the apartment found around $1,300 in cash of similar denominations to the money taken from Camden National Bank, according to Liberman.

“The state believes there is evidence enough to convince a jury beyond reasonable doubt,” Liberman said, concluding his remarks.

Demmons is in custody at the Maine Correctional Center in Windham, according to the Maine Department of Corrections.

After his March 7, 2012 attempt to rob the same bank, Demmons pleaded guilty to class B robbery Sept. 28, 2012, according to court documents. He was sentenced to six years in custody with all but seven months suspended, plus three years of probation.