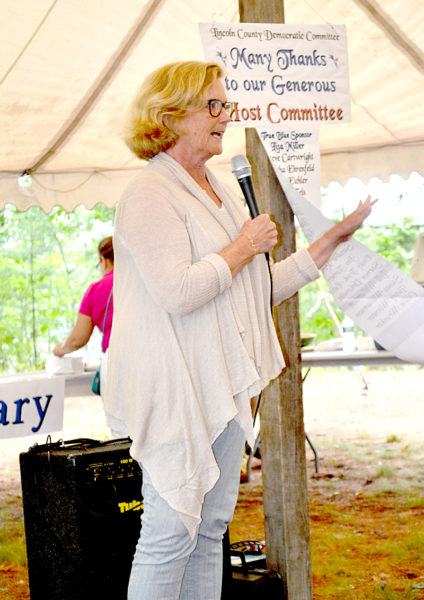 The campaign starts today, Maine Attorney General Janet Mills said to county Democratic candidates and supporters who gathered at the annual Lincoln County Democratic Committee lobster bake in South Bristol on Saturday, Aug. 13. The nation is experiencing one of the most unpredictable election cycles it has seen in decades, U.S. Congresswoman Chellie Pingree said, and the stakes for the Nov. 8 general election are higher than ever before.

Mills and Pingree were featured speakers at the annual fundraiser for the Lincoln County Democratic Committee. Both spoke passionately of the need to reclaim Democratic control of the Maine State Legislature and of Washington to overcome what they described as Republican obstructionism that has left government in gridlock.

A “strong and robust” Democratic majority is needed in the Legislature, Mills said. It is the only thing that can stop the governor’s “dangerous shenanigans,” she said. 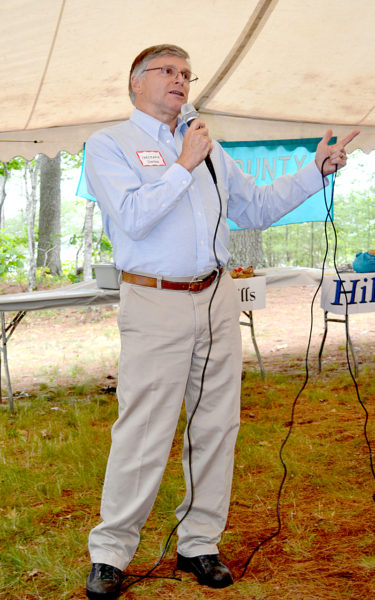 State Sen. Chris Johnson speaks of a comprehensive economic plan legislators plan to implement with or without the support of the governor at the Lincoln County Democratic Committee’s annual lobster bake Saturday, Aug. 13. (Abigail Adams photo)

Mills spoke about her experience as a delegate at the Democratic National Convention in Philadelphia. The sounds and songs are still with her, she said as she recounted a number of inspirational speeches and moments from the convention.

In the presidential election, Lincoln County has always gone Democratic, Mills said. “Let’s do it again,” she said. With unenrolled voters outnumbering Republicans and Democrats, they will largely determine the outcome of the election, and they are a little “befuddled” with the choice in front of them, she said.

Mills encouraged Democrats to reach out to independent voters on behalf of Clinton, the most “vetted and scrutinized candidate” on the ballot, she said.

Mills is often asked what she plans to do about Gov. Paul LePage, she said. Creating a veto-proof majority of Democrats in the Legislature is the only way to stand up to him, she said.

Pingree, who is seeking re-election in Maine’s 1st Congressional District, which includes Lincoln County, has not always felt hopeful in her eight years in Congress, she said. Much of the good work the Democrats began under the Obama administration was derailed when Republicans took control of the U.S. House of Representatives in the 2010 election, she said.

“I am energized, enthusiastic, and hopeful for what lays ahead,” Pingree said.

No one ever thought there would be a presidential candidate as “disrespectful, unreliable, and bigoted” as Donald Trump, Pingree said. 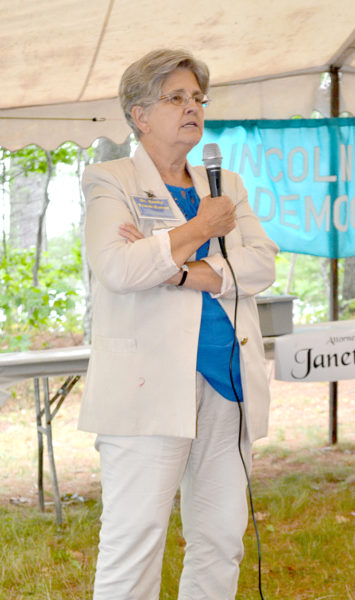 Her participation in the June sit-in on the floor of the U.S. House of Representatives over gun control was a bright spot and a turning point in what has been a sometimes frustrating six years in office, Pingree said.

The sit-in was an example of Democrats “making good trouble” to bring important issues to the forefront of the legislative process, Pingree said. Bernie Sanders’ primary campaign altered the Democratic platform in a way that progressive Democrats had not seen before, she said.

Democrats afraid of “rocking the apple-cart” are now proactively tackling immigration and climate change, among “so many things that we need to be in front of in a meaningful way,” Pingree said.

As campaigns gear up on the local, state, and national level, “all of us know how high the stakes are,” Pingree said.

Johnson, a three-time incumbent in the state Senate, is being challenged by former Sen. Dana Dow, R-Waldoboro. LePage has prevented the Legislature from doing some things with his widespread use of vetoes, Johnson said.

“By God we’ll get them done, if not in the next two years, then when we have a governor who cares about the Maine people,” Johnson said.

Johnson spoke of a comprehensive economic and energy plan legislators plan to roll out shortly. A comprehensive plan “is much smarter than saying, let’s give tax breaks to someone who won’t do anything with them.”

Mary Trescot, who is running unopposed for re-election as county commissioner, spoke of the toll recent legislation has had on the county corrections system, and the higher-than-average poverty level in Lincoln County. 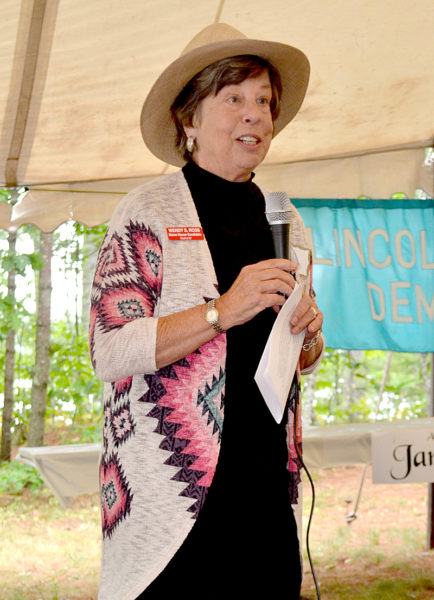 For Trask-Eaton, middle-class jobs and health care will be the focus of her campaign for House District 91, a seat previously held by Jeffrey Evangelos, I-Friendship, which she is now competing for with Republican candidate Abden Simmons. More than 50 small businesses have closed in Waldoboro, Trask-Eaton said – a trend that needs to be reversed.

Ross’ run against incumbent Rep. Jeff Hanley, R-Pittston, was a natural transition for the former communications professional and activist for reproductive rights, she said. The lifelong Democrat is now going door-to-door in the district to hear the concerns of citizens, and they are struggling, Ross said. More preschools, paid maternity leave, and increased broadband access across the state will be focal points of her campaign, Ross said.

Former Lincoln County Democratic Committee Chairman Jim Torbert resigned his position to take on three-time incumbent Deb Sanderson, R-Chelsea. Referencing his children and grandchildren in Whitefield, he said “I have skin in this game.”

Sanderson voted to sustain LePage’s veto of LD 1649, “An Act to Modernize Maine’s Solar Power Policy,” which had widespread support from solar power advocates and public utilities. The veto derailed Whitefield’s plan to power municipal buildings with a solar array, Torbert said. “She has a voting record and I intend to make her eat it,” he said. Broadband access, funding for public education, and revenue sharing are among the issues he will focus on during his campaign, Torbert said. 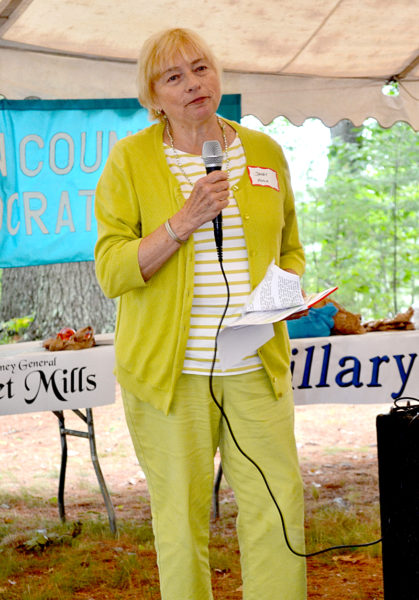 “Every election, we say it is the most important in our lifetime,” Pingree said. The Nov. 8 general election may truly be just that, she said. 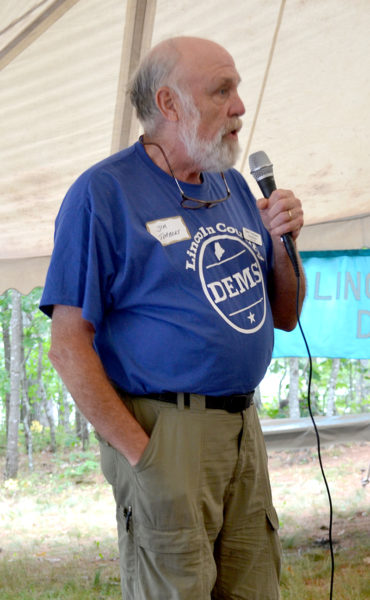