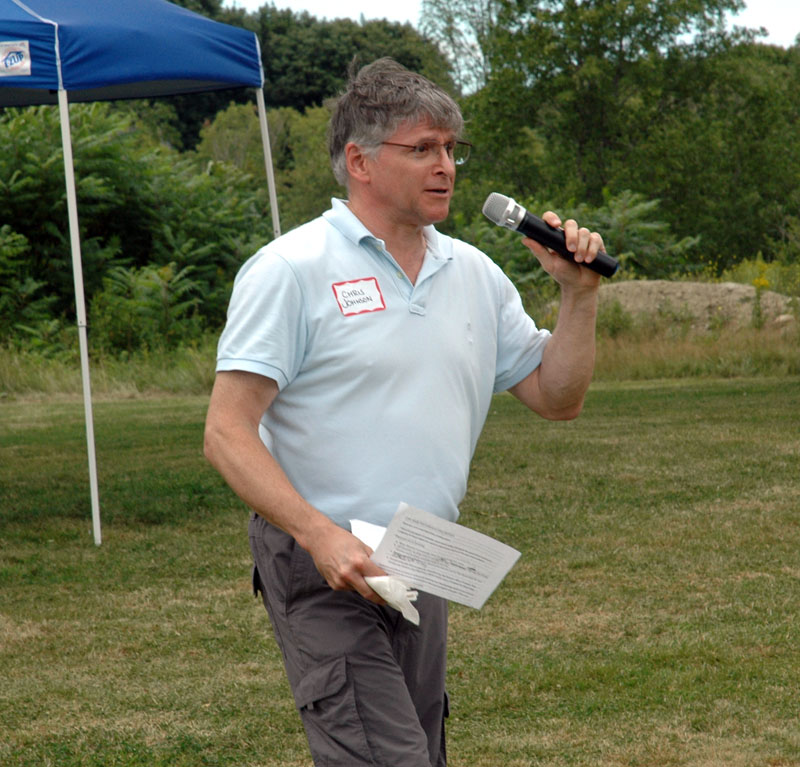 The event took place at Cider Hill Farm in Waldoboro on Sunday, Aug. 13. Many prominent local Democrats attended the event, including county commissioners and selectmen.

Gubernatorial candidates Adam Cote, of Sanford; Mark Eves, of North Berwick; and Betsy Sweet, of Hallowell, spoke at the event.

Cote is an attorney, former candidate for Maine’s 1st Congressional District, and U.S. Army veteran. Eves is a former speaker of the Maine House of Representatives. Sweet is a progressive activist and lobbyist, as well as a former director of the Maine Women’s Lobby and the Maine Commission for Women.

In addition to the gubernatorial candidates, Natasha Irving, of Waldoboro, a candidate for district attorney, spoke at the event in her hometown.

Johnson spoke of the need for change at both the state and federal level, citing the recent escalation of rhetoric between President Donald Trump and North Korea, in addition to the domestic terrorism in Charlottesville, Va.

“Never has our work been more important,” Johnson said. “These things are not what our nation is about. I miss when truth, justice, and the American way were concepts we aspired to.”

Eves talked about the state’s future and the importance of a Democrat retaking the Blaine House.

“Whoever is the successful candidate … I will do everything in my power to ensure we have a Democrat in the Blaine House in 2018. The stakes are too high,” Eves said.

Eves said he worked hard to fight for Mainers as speaker of the House and would continue to do so as governor.

“The past four years, as speaker, I sat across the table from the governor, holding the line and fighting for what we believe in,” he said. “The last seven years, the governor has encouraged people to see the worst in each other, and the last several months, the president has done the same thing.” 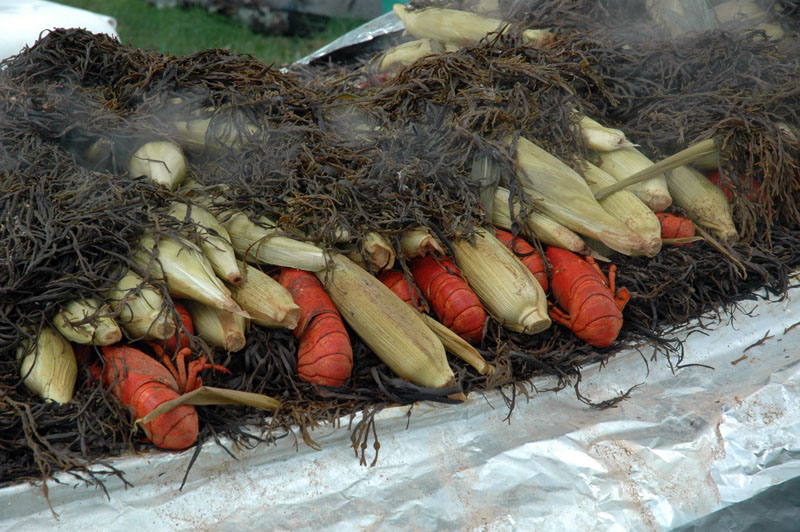 Eves said he believes there needs to be a more personal approach to politics.

“Before I was speaker, I was a family therapist helping people in trouble. You go through the door, you sit with the people, you listen to them, and you understand what is in their way. That’s what is missing in politics,” Eves said.

Sweet said she has worked on behalf of ordinary Mainers and would continue to do so as governor.

“If we’re not at the table, we’re often on the menu, and that has never been more clear than in the past six years,” Sweet said.

Sweet said she will use Maine’s public campaign financing system.

“I am running as a clean elections candidate because I will not take money from corporations, from big donors and big (political action committees),” Sweet said.

Sweet said in order to be successful, she will have to talk to 16,000 Mainers one-on-one. 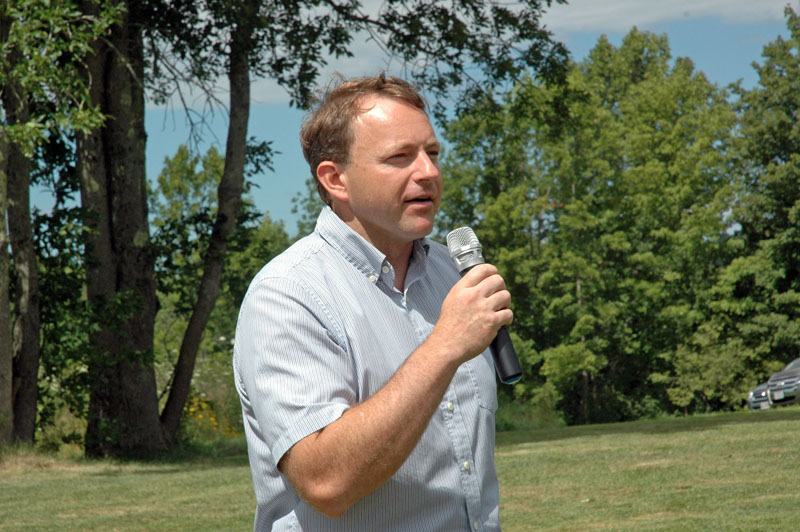 “I am committed to making sure we do this differently, and I do believe this is a historic moment … when Americans and Mainers rise up and say, ‘No, we are not going to do it this way, we are going to do it differently,” Sweet said.

Cote said he was prompted to run by his and his family’s love for the state of Maine.

“It really came down for us about loving our state and talking about what it is going to look like 10 years from now,” Cote said.

He referenced a number of issues, from education to job creation, where he feels there is an opportunity to make a difference.

Cote said there needs to be a change in how the state and nation approach the opioid crisis.

“You know what? It’s an addiction. You can’t just put people in jail over and over again and expect that we are going to address this crisis that way,” Cote said.

Cote is a veteran of the Maine National Guard who served in Bosnia, Iraq, and Afghanistan.

Cote also referenced his experience working with renewable energy – wind, solar, and biomass – and starting an energy storage company. He earned recognition from President Barack Obama for his work on climate change. 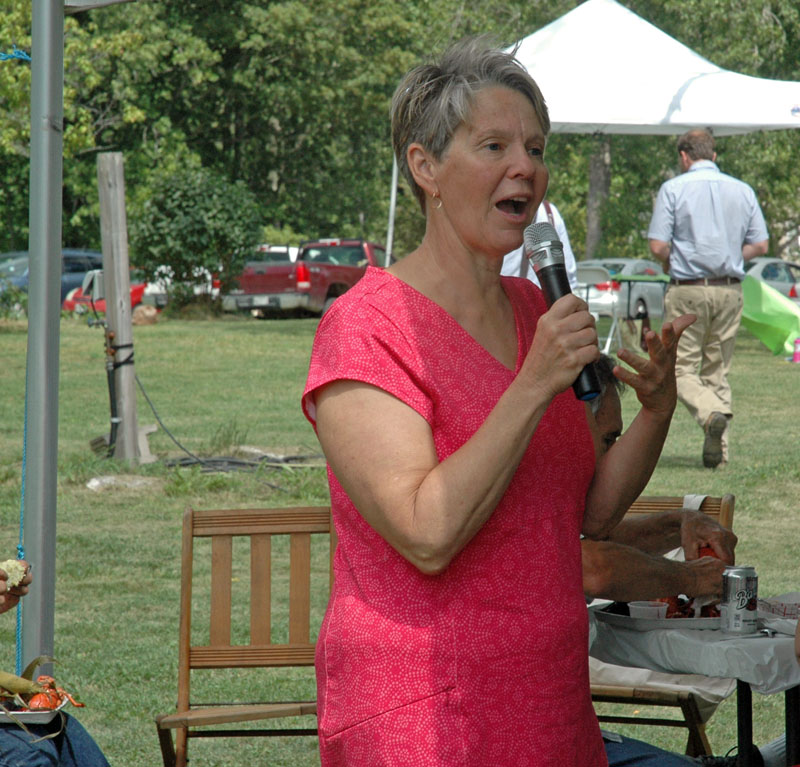 “As somebody who has worked in renewable energy for my entire professional life, I am convinced we could be the first state in the country that has 100 percent renewable energy as our generation. I know that we can and it can help create jobs in rural areas and mill towns throughout the state,” Cote said.

The Republican side includes only one candidate so far: former Maine Health and Human Services Commissioner Mary Mayhew, of South China.

Other candidates include Maine Treasurer Terry Hayes, of Buckfield, an independent; Green Independents Jay Dresser, of Bangor, and Elizabeth Marsano, of Waldo; and Libertarian Richard Light, of Liberty.

The Narrows Tavern, of Waldoboro, catered the event. Pemaquid Oyster Co., of Damariscotta, supplied a raw bar. The Oystermen provided live music before the speeches. The duo consists of Smokey McKeen and Carter Newell, both also of Pemaquid Oyster Co.