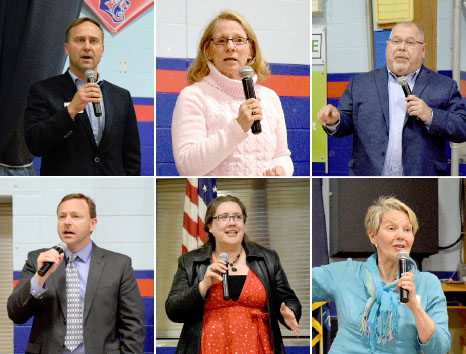 Six of the seven Democratic candidates for governor talked about the state’s economic challenges, funding for education and social programs, and how to win in November during a forum in Damariscotta on Saturday, May 12.

Indivisible – Boothbay and Lincoln County Indivisible hosted the forum at Great Salt Bay Community School. The audience filled the bleachers and chairs set up in the GSB gym.

The Indivisible organizations describe themselves as nonpartisan but progressive. They did not invite independent or Republican candidates to the forum.

Barbara Burt, of Boothbay Harbor, a member of the Indivisible – Boothbay Steering Committee, moderated the forum.

During the two-hour event, Burt and audience members asked the candidates about climate change, gun control, immigration, the opioid crisis, taxes, and women’s rights, among other issues.

In response to a question about gun control, Mills expressed support for universal background checks. 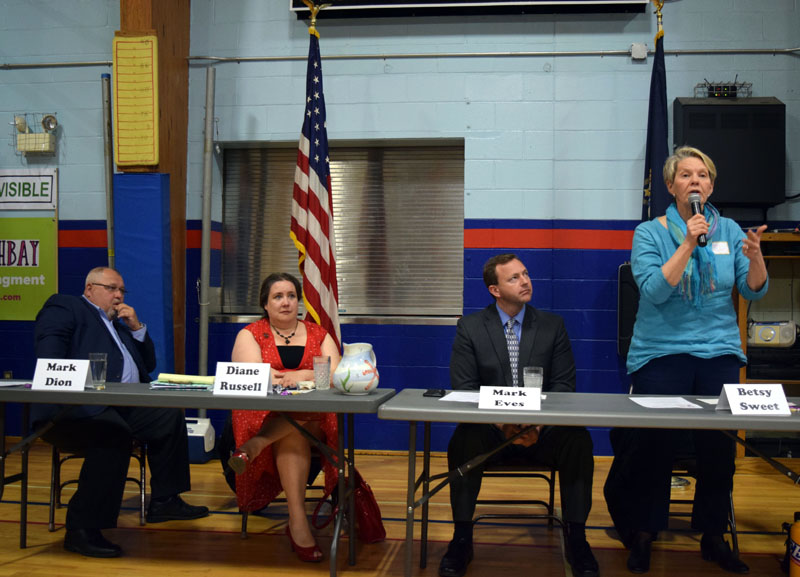 “The difficult part is this: the issue was just on the ballot, and it failed,” Mills said through Josephs. “We talk a lot about respecting the will of the voters on Medicaid expansion, marijuana legalization, and education funding, and I don’t think we can only make that argument when it’s convenient.”

“I would be committed to bringing hunters, sportspeople, gun safety experts, and public safety advocates to the table to craft a background-check bill” that could gain widespread support, Mills said.

Burt addressed a question about abortion to Russell.

“How will  you support a woman’s right to control her own body and have access to abortion services?” Burt said. “Can you find common ground with people of opposing viewpoints?”

“I can answer the last question first: no,” Russell said, before going on to address issues of gender equality.

“We have to have a conversation beyond just reproductive rights,” Russell said. “We have to talk about pay equity – making sure that nurses and teachers don’t get paid less as an industry simply because there are more women in (nursing and teaching).”

Cote fielded a question on how to strengthen K-12 public education.

“We need to first fully fund universal (pre-kindergarten) in this state,” Cote said. “It’s the best dollar you will ever invest.”

“We have to fully fund our public schools, up to 55 percent, as it says under the law … We need to focus more on (science, technology, engineering, and mathematics). We need to start getting our girls involved in STEM,” Cote said.

Each candidate took one question in the first round, but had an opportunity to choose one of the other questions to respond to in the second. The candidates differed on a question about their willingness to raise taxes to pay for health and social programs.

“I’m willing to evaluate all the resources that we have. I’m not immediately willing to raise taxes,” Donna Dion said.

She said she would examine the effectiveness of business tax credits and consider whether to end the credits and invest the funds elsewhere.

Mark Dion disagreed. “We have to raise taxes to have the schools we want and the schools our children deserve,” he said.

The audience for a gubernatorial candidates forum fills most of the gym at Great Salt Bay Community in Damariscotta on Saturday, May 12. (J.W. Oliver photo)

“I need the taxes to give teachers the wages they deserve, with a base pay of at least $40,000 … I’ll repeal LePage’s tax cuts,” he said.

During an intermission, the audience heard a presentation on ranked-choice voting. Burt, Josephs, and “The Rankettes” then led the audience in a sing-along of the “The Ballad of Ranked Choice Voting.”

After intermission, the candidates fielded questions from the audience. Lincoln Academy freshman Riley Stevenson, one of the organizers of a March 14 walkout at the school, asked the first.

“As governor, how would you work to improve gun legislation to ensure student safety in schools?” Stevenson said.

The question went to Sweet, who related a conversation she had with a proponent of gun rights.

Eves fielded a question about how to attract young workers to Maine. The state needs to invest in vocational training during high school, he said.

Eves said his administration would create more initiatives like a program he worked on as speaker that trains loggers at Maine’s community colleges.

Mark Dion, who was Cumberland County sheriff for 12 years, got a question on the opioid crisis. He said municipalities need to change their ordinances to welcome recovery housing and small businesses need to be willing to hire people in recovery.

“You have to open your doors to employment to people that you know will fail, because a lot of recovery is failure until you find your way, and we need employment that recognizes the path to recovery,” he said.

Late in the forum, Burt asked each candidate, “What do you think is Maine’s greatest challenge and how will you address it?”

“I would say our biggest challenge as Democrats is winning … We haven’t received over 50 percent of the vote in a statewide race since (former U.S. Sen.) George Mitchell ran for re-election in 1988,” Cote said.

Democrats and Republicans will choose their gubernatorial nominees  in the primary election June 12 – the first statewide election in the country to use ranked-choice voting.