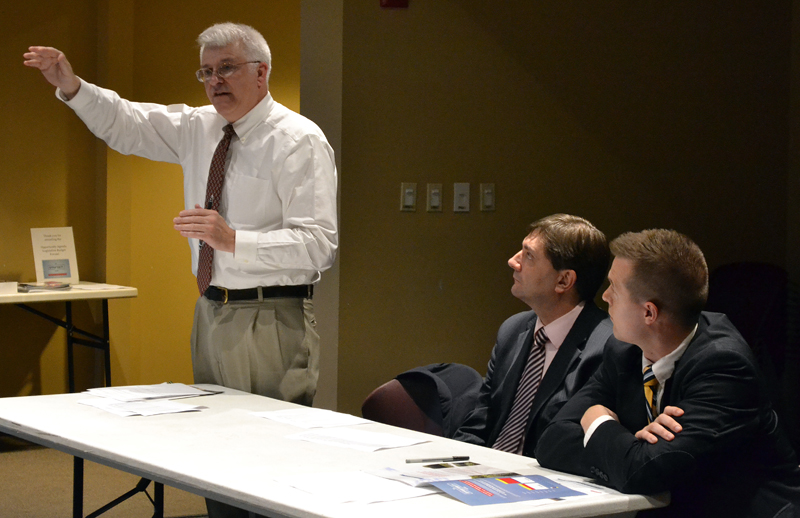 The governor’s budget continues his practice of giving tax cuts to the top 2 percent of earners in the state while property taxes continue to climb, Jackson said.

The Democratic lawmakers’ alternative plan presents an opportunity to pass the largest property tax cut in the state’s history, according to a two-page outline of the Opportunity Agenda distributed at the forum. Devin, Golden, and Jackson each talked about their constituents’ concerns about property taxes.

“As we were developing (the Opportunity Agenda), we asked our caucus members about what the most important things to their communities were,” Golden said. “As we looked for things that were broad concerns across the board, property taxes were by far the biggest concern, from Fort Kent to Kittery.”

The Opportunity Agenda calls for an increase in the homestead exemption from $20,000 to $30,000 and expanding the property tax fairness credit by $33 million to give refundable tax credits to low- and middle-income homeowners and renters. 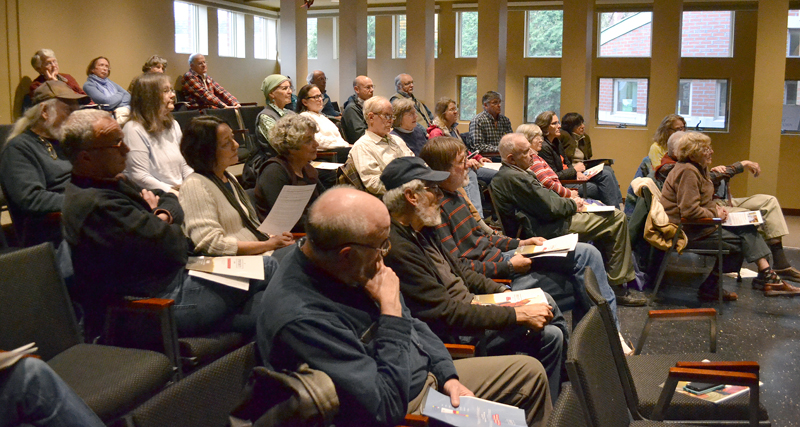 Area residents attend a town hall-style forum in the Porter Meeting Hall at Skidompha Library the evening of Thursday, May 4 to hear from members of Democratic leadership about the party’s alternative to Gov. Paul LePage’s biennial budget proposal. (Maia Zewert photo)

In addition, the Opportunity Agenda calls for a partial restoration of the funds municipalities receive from the state through revenue sharing, to 3 percent from its current 2 percent. Revenue sharing was established in 1972 as a way for the state to help local towns, which cannot levy sales taxes, pay for mandatory services.

Originally, the state provided 5 percent of the sales, income, and corporate taxes to municipalities, but the figure now sits at 2 percent. LePage’s budget proposal calls for the permanent funding of revenue sharing at 2 percent in an effort to “bring some level of certainty to the municipal budgeting process,” according to the budget document.

The Opportunity Agenda also would reduce the burden of property taxes by fulfilling the state’s obligation to fund 55 percent of public education costs. In November, voters narrowly approved Question 2, which imposes a 3 percent surtax on households earning more than $200,000. Revenue from the new tax would provide an estimated $370 million to support K-12 public education, according to the Opportunity Agenda.

LePage and Republican legislators have expressed opposition to the tax. LePage’s budget proposal calls for the reversal of the tax, while Sen. Dana Dow, R-Waldoboro, is sponsoring a bill to eliminate the tax entirely and fund education through surplus revenue generated by economic growth and tax revenues from the sale of recreational marijuana.

Other priorities outlined in the Opportunity Agenda include reimbursement for direct care workers and $5 million for combating the opioid epidemic, which is “one of the biggest issues” facing the state, Devin said.

The Democrats’ plan projects a total of $264,753,148 in new revenue over the next two years to fund their initiatives, including $181,523,148 from economic growth and $13.23 million in recreational marijuana tax revenues.

The plan also projects $70 million in new revenue from sales tax on Amazon purchases by Maine residents. Jackson said Amazon will voluntarily collect the tax and give it back to the state, much as it already does in other states.

When asked why the Opportunity Agenda does not include alternatives to the governor’s proposals for health care funding and environmental protection, Golden said the agenda does not represent all of the party’s priorities.

“It doesn’t represent everything we stand for, but these are the thing we feel we can have a discussion about,” Golden said. “When it comes to health care, there will be no compromise. We’re not closing on a budget that includes health care cuts.”

To read the full Opportunity Agenda, go to goo.gl/Dz9h2e.