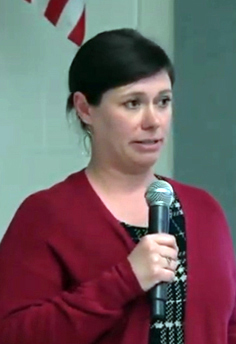 Cameron Reny, a Democratic primary candidate for Senate District 13, speaks at a forum at Great Salt Bay Community School on April 26. Reny lives in Bristol and is a school counselor. (screenshot)

David Levesque and Cameron Reny are running for the seat currently held by Sen. Chloe Maxmin, D-Nobleboro, who is not running for reelection. The winner of the primary, set for June 14, will become the Democratic nominee in the general election Nov. 8.

State Senate District 13 includes all towns in Lincoln County except Dresden, as well as Windsor in Kennebec County and Washington in Knox County.

Reny, who lives in Bristol with her husband, said she believes she can work with everyone, even those with differing viewpoints, to bring change to Maine and District 13.

Reny works as a school counselor and said that mediation and problem-solving are two important focus areas in her work.

“I am the right person to try and solve these very important issues,” Reny said.

Levesque, who lives with his family in Newcastle, discussed his background growing up in rural Downeast Maine in a fishing family, along with his work ethic and leadership roles. Levesque is a past president of the Maine State Bar Association and the Lincoln County Bar Association.

Both candidates placed importance on addressing the lack of affordable housing in District 13, combating high healthcare costs, and protecting the environment.

Levesque and Reny each said they believed climate change is a pressing problem and must be addressed by transitioning Maine away from using fossil fuels for its energy needs.

They both voiced support for the Pine Tree Amendment, which would be an amendment to Maine’s constitution that would give citizens a right to clean air and water.

Levesque said that had there been a Pine Tree Amendment in place, it could have prevented the spreading of sludge and the proliferation of per- and polyfluoroalkyl substances, commonly called PFAS or “forever chemicals,” on fertile farmland. 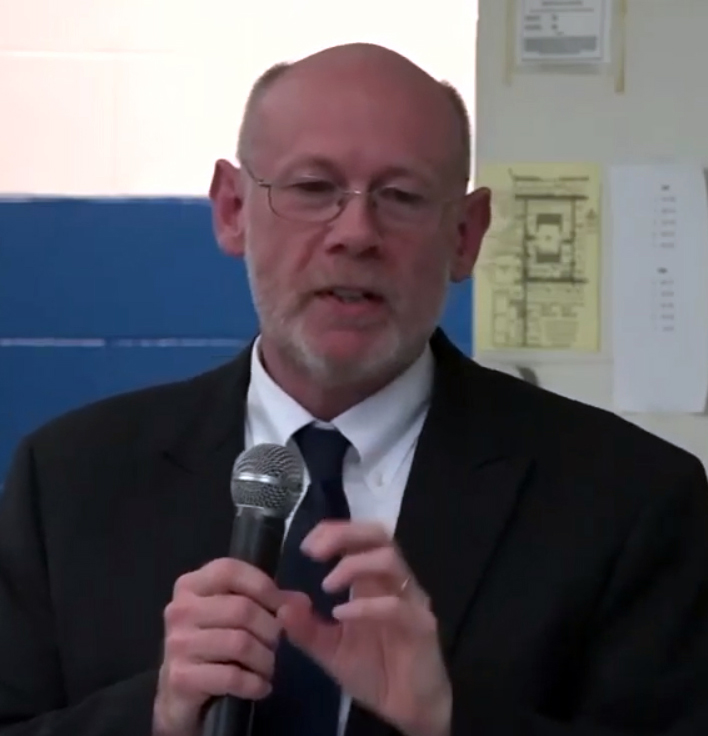 David Levesque, Democratic Senate candidate for Senate District 13, speaks at a forum at Great Salt Bay Community School on April 26. Levesque is an attorney who lives in Newcastle and serves on the Newcastle Select Board. (screenshot)

“Maine’s natural resources are the reason why a lot of us live here,” Levesque said.

Reny stressed the urgency of dealing with climate change, saying we “have years to deal with this” and “a responsibility to the next generation.”

“I think that sounds like an amazing basis for where to start with to address environmental issues,” Reny said of the Pine Tree Amendment.

Both candidates also expressed support for a consumer-owned utility in place of Central Maine Power Co. to keep money spent on energy in the state. Spain-based Iberdrola owns a majority share of Avangrid, CMP’s parent company.

“I will do all I can to hold them accountable to make sure they are delivering energy at the lowest cost possible,” Levesque said.

Reny expressed her displeasure with CMP’s customer service and added that a consumer-owned utility would make it easier to transition away from using fossil fuels for energy.

Questions also arose about the lack of affordable housing in Lincoln County and in Maine.

Levesque said the solution to the housing problem must start at the local level. As a member of the Newcastle Select Board, Levesque recently voted to waive permit fees for resident who want to set up an accessory dwelling unit and the town has formed a housing committee to look at the issue.

“We can bring people here. We need places for them to live,” Levesque said.

Reny said the problem will take lots of “creative teamwork” and collaboration from all parties involved to come up with a long-term solution to what she called the housing “crisis” in Maine.

“I strongly believe the future of our district depends on if people can move here,” Reny said.

A recording of the forum is available at lincolncountydemocrats.com.