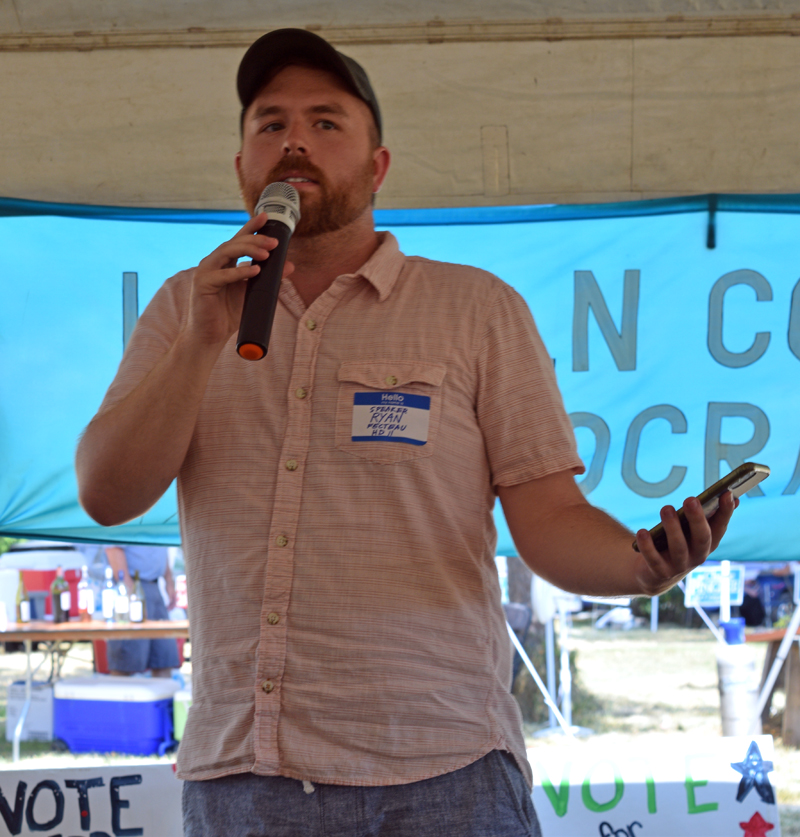 Speaker of the House Ryan Fecteau (D-Biddeford) outlines the accomplishments of the Democratic-controlled legislature over the past few years during the Lincoln County Democratic Committees annual Family Fun Day Lobster Bake at Cider Hill Farm in Waldoboro on Sunday, Aug. 7. Thats the work we need to continue to build upon, he said. (Evan Houk photo)

Under the oppressive sun on one of the hottest days of the year, local candidates running for election in November urged the crowd to vote Democratic and to donate to and volunteer for candidates in their communities. Maine Senate President Troy Jackson (D-Allagash) and Maine Speaker of the House Ryan Fecteau (D-Biddeford) also spoke.

A 15-minute torrential downpour in the middle of the hot and humid day cooled off the guests right after the food was served.

Fecteau stressed the importance of electing Democrats, saying that if Republicans retake control of the legislature and the Blaine House, they will try to take away abortion rights.

He listed the accomplishments of Democrats in the legislature—including investing $80 million in housing, expanding Medicaid coverage to nearly 100,000 people, a significant investment in career and technical education, and increasing revenue sharing with municipalities to 5% and education funding to 55%.

“That’s the work we need to continue to build upon,” Fecteau said.

Maine voters approved a referendum in 2004 directing the state to fund 55% of local education. This funding level was not fully implemented by the state legislature until last year.

Jackson stressed the importance of Lincoln County candidates getting elected in order for the Democrats to retain a majority in both chambers of the legislature. He expressed a desire to continue work helping Maine people who are struggling.

“Government should work for the people in this state, the people who need it,” Jackson said. “We need every bit we can get.”

Cameron Reny, candidate for Senate District 13 and a Damariscotta resident, told her story about growing up in Bristol and talked about the inspiration her grandmother provided by being committed to public service.

“We have to give our communities our time, our thought, and our effort by making sure the House, the Senate, and the Blaine House stay blue because so much is riding on this election,” Reny said.

He urged voters to engage younger people and try to get them involved in local and state politics by illustrating how to make a difference.

“Young people don’t have time for something that’s not going to make a difference in their lives,” Johnson said.

Paula Arsenault, who was named honorary chair for the lobster bake, urged Democrats to “have a strong voice” and be “passionate about promoting Democratic values of economic, social, and environmental justice for all.”

“Despite systemic oppression, we can still make a difference,” Arsenault said.

Jeff Hurd, owner of Cider Hill Farm, baked about 185 lobsters on a metal grate over a hot open fire. The lobster was layered with seaweed and included potatoes, corn, and mussels.