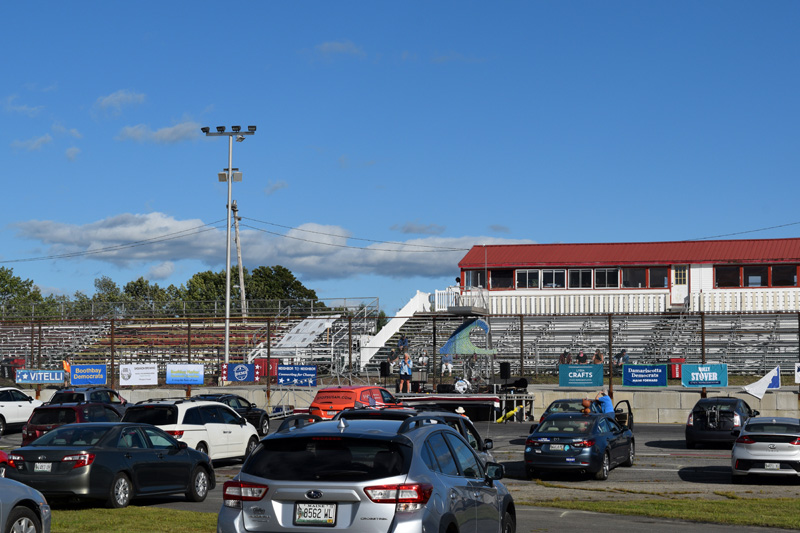 Almost 200 people gathered in their vehicles to watch candidates speak and drum up excitement for the Nov. 3 election. Speakers emphasized the state’s resilience and people’s willingness to help each other throughout the pandemic.

U.S. Rep. Chellie Pingree was scheduled to appear in person but did not, citing family obligations. Pingree recorded a message for the event.

“This is truly the most important election of our lifetimes,” Pingree said. She said Democrats in the U.S. House of Representatives have been working to provide financial aid to those impacted by the coronavirus pandemic.

“We need the White House to stop pretending this is over, and to come to the negotiating table so that we can move forward with this aid,” she said. “We cannot survive another four years of this assault, and we need Democratic majorities in the House and Senate to back up the new Biden-Harris administration.”

Each candidate spoke about the issues most important to them, including health care and police reform, as well as the pandemic, and called for the election of Democrats at all levels of government.

Several speakers emphasized the need for connection during the pandemic.

“People feel very isolated right now and they spend a lot of time online or watching television, getting very depressing views of what’s out there,” said Barb Burt, campaign coordinator for the Lincoln County Democratic Committee and co-chair of the event, in a phone interview the next day.

Event Co-chair Geoff Bates, chair of the fundraising committee for the Lincoln County Democrats, said they have hosted several virtual events since the pandemic hit, but wanted to organize an in-person gathering before the election.

“We all felt as though it was important for us to find some moment to gather as many people together in person, so that they can share and build that energy that we’re going to need to lead Democrats to victory in November,” Bates said.

Julia O’Brian-Merrill, of Newcastle, attended the rally with her husband. “I was really amazed at the organization, from the moment we drove in,” she said. “The feeling of inspiration and energy from the speakers was great.”

“It was uplifting, but serious,” O’Brian-Merrill said.

Sample told comedic stories and talked about the generosity of Mainers and their spirit of unity, saying he would never want to live anywhere else.

A recorded message from Democratic presidential nominee Joe Biden was played in which Biden called the election “a battle for the soul of this nation.”

“This is the United States of America. There’s not a single thing we’re not able to do when we do it together,” Biden said.

“I can see the solutions we need quite clearly, as can many of my peers. But I’m only 17, and I can’t vote in this election,” Stevenson said. “We need you, our parents and grandparents, to think about the future you want to leave us.”

“Listen to our fears, our concerns, our wishes, and act accordingly,” she said.

Maxmin, who is running to represent most of the county in the Maine Senate, said that “elected officials have failed us for generations.”

“The way that we reclaim our democracy is to elect different kinds of people to office,” Maxmin said.

Maxmin encouraged Democrats to have conversations with members of their communities who plan to vote for President Donald Trump in November. “You don’t have to change their mind. Just listen to where they’re coming from,” she said.

“We all have one thing in common,” Maxmin said. “We all live here and we all love our home, and we’re willing to fight for it.”