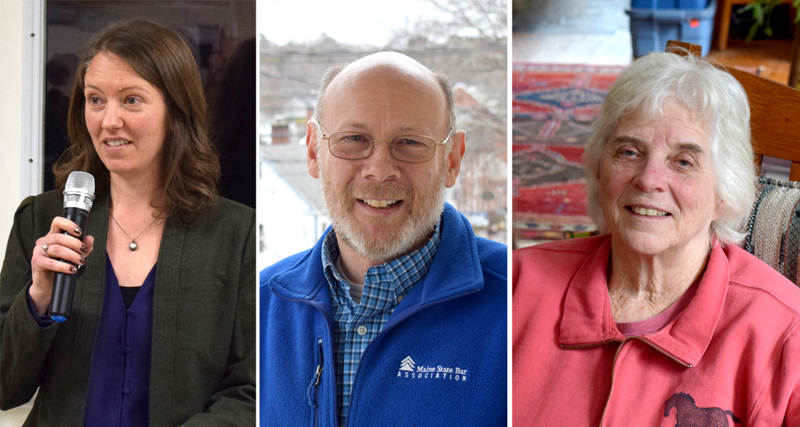 Democratic voters will decide an unusual three-way primary to select their nominee in the race to replace term-limited state Rep. Mick Devin, D-Newcastle.

No Republican candidate has come forward yet. The state primary is Tuesday, June 9.

Devin is serving his fourth straight two-year term, the maximum allowable by law.

“You, each and every one of you, are why I’m running to represent District 90. A community that comes together for everyone is always stronger. When we come together, we do amazing things,” Crafts told the crowd of about 65 crowded into the fire hall.

Crafts has experience in social work, education, and volunteerism.

She was born in Belfast and now lives in Newcastle with her husband, Kevin, a teacher at Bristol Consolidated School, and their daughters, Amelia and Kestrel.

Crafts said she is participating in political training with Emerge Maine, an organization that provides training on campaign logistics to Democratic women.

Crafts works at Bristol Consolidated School as a behavior program director. She has also been a clinical social worker at the RSU 1 school district, Providence Health, and Togus, the U.S. Department of Veterans Affairs hospital.

She said BCS has offered her a leave of absence to serve in the Legislature, since her position does not require her to be in a classroom daily.

“That’s one of the challenges of our Legislature, is that it pays $10,000 a year. So, if you don’t have a job that allows you to keep working, you either have to be retired or independently wealthy,” Crafts said.

Crafts sits on the Newcastle Board of Appeals and was on a sidewalk committee in the town.

After she and Kestrel were nearly hit by a vehicle while walking up Academy Hill, she took the issue to the Newcastle Board of Selectmen.

At her launch party, Crafts told the story about how this event led her to start a petition and get involved.

“With each conversation and each additional signature, I learned that I wasn’t the only person worried about sidewalks. Our community wants safe streets to walk,” Crafts said.

Her work led to the formation of the sidewalk committee.

If elected, Crafts’ main priorities are to promote strong education and universal prekindergarten, address climate change and how it will affect local fisheries, and ensure the local tourism economy has a strong workforce.

David Levesque is an attorney who practices out of his office in Damariscotta.

Levesque lives in Newcastle with his wife, Susan, a math and robotics teacher at Lincoln Academy, and their three sons: Luke, 24; Austin, 15; and Joseph, 12.

He has lived in Newcastle for 20 years.

“Our roots are so strong here now, there’s no pulling us out,” Levesque said in a phone interview Jan. 21. He said he looks forward to giving back to his community by serving in the Legislature.

Levesque grew up in Hancock County in a family engaged in commercial fishing, boat building, and marine construction.

Levesque said his top priorities, if elected, will be addressing what he called “the health care crisis,” dealing with climate change, and expanding education access.

He said the cost of health care and prescription drugs has become outrageous and he hopes to do something about it.

“People are trying to make health care decisions based on finances, and they shouldn’t have to do that,” Levesque said.

He said he supports a national system of universal health care and would do whatever he could at the state level to push for that.

Levesque said climate change needs to be an urgent priority, noting the drastic changes in weather this winter as an indicator of the rapidly changing climate.

“A weekend ago, it was close to 60 (degrees), and here we’re at zero  today. And the fluctuations in the severity of storms, this is not typical weather, at least not that I experienced growing up here in Maine,” Levesque said.

He said pursuing this agenda will involve pushing for sustainable and more efficient sources of energy, such as heat pumps and solar power.

Levesque’s third priority will be supporting a strong educational system in Maine, from prekindergarten through post-secondary education.

“If we have a strong educational system, we’ll be able to bring minds together and really solve some of the many, many other problems we have,” Levesque said.

In his spare time, Levesque said he keeps busy maintaining and fixing up his historic buildings, both of which date to the 1800s.

He has served on many local, state, and national nonprofit boards and committees.

Wendy Pieh currently chairs the Bremen Board of Selectmen and previously served four nonconsecutive terms in the House, from 1996-2000 and 2006-2010.

She hopes to return to the House and will also run for reelection as a selectman in June. “I did both before,” she said.

Pieh is in her 15th year as a Bremen selectman and she said she is proud of what the board has accomplished together during her time there.

Pieh said she has been contemplating running for the Legislature for a few years, but did not want to challenge the Democratic incumbent, Devin.

“It’s the best job I ever had. That’s the thing that draws me back – the professional relationships are just very, very nice. Maine’s a small state. I mean, it’s a big state, but it’s a small population. You can make a difference so much easier than if you’re one of 8 million people living in Los Angeles,” Pieh said.

During her time in the Legislature, Pieh served as House chair of the Agriculture, Conservation, and Forestry Committee. She would like to continue to provide a voice for Maine farmers and fishermen.

Pieh said one of her proudest accomplishments in the Legislature was leading the rural caucus in improving school consolidation laws to allow more local control during Gov. John Baldacci’s administration.

During her time in the Legislature, she also served on the Health and Human Services Committee and the Marine Resources Committee.

Pieh talked about a bill she helped pass to force insurance companies to pay for an emergency room visit, even if the patient is not experiencing a serious or life-threatening condition.

“When you’d go into the ER with chest pain, your insurance company would pay for it if it was a heart attack. If it was heartburn or indigestion, they wouldn’t pay for it,” Pieh said.

In addition to environmental protection, she plans to advocate for patients’ rights and the improvement of the emergency medical services system if elected.

Pieh grew up on her family’s farm in Ohio before moving to Birmingham, Ala., where her father taught at a private boarding school.

Her family then founded the Minnesota Outward Bound School in 1964, when she was 16. She eventually became executive director of an Outward Bound school in Lesotho, in southern Africa, where she met her husband, Dr. Peter Goth.

Since 1997, she and her husband have been running Springtide Farm in Bremen, where they breed North American cashmere goats for stock and to produce premium-quality cashmere thread.

“My strengths are bringing people together, common ground.  Everybody has it if they want it,” Pieh said.