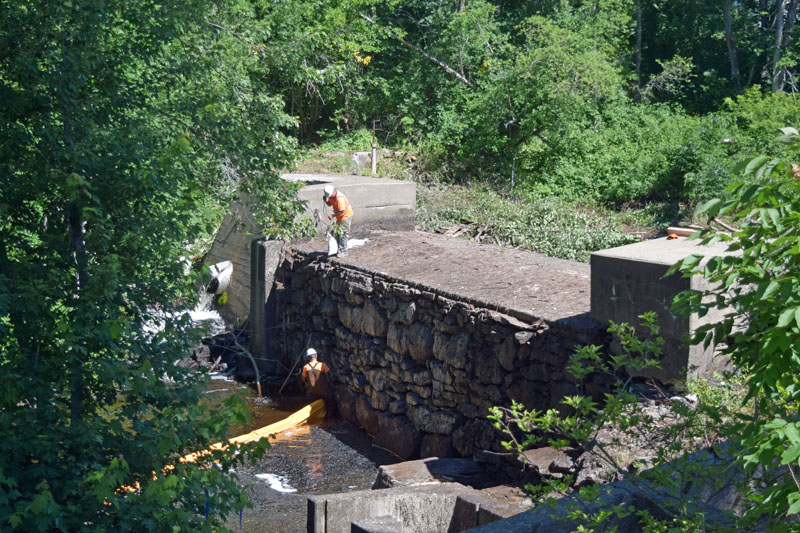 Work on the Coopers Mills Dam begins Thursday, July 19. The project is the first step in a multiple-year effort to improve habitat for endangered Atlantic salmon and other migratory fish along the Sheepscot River. (Jessica Clifford photo)

A four-month project at the Coopers Mills Dam started Thursday, July 19 and continued with the demolition of the fish ladder Tuesday, July 24. Workers began to remove the dam Wednesday morning.

Andrew Goode, the project coordinator and vice president of U.S. programs at the Atlantic Salmon Federation, estimated the project will cost $500,000. He expects work to conclude in late October.

The goal for the project is to improve public safety and fish passage along the Sheepscot River. SumCo Eco-Contracting LLC, of Peabody, Mass., is the contractor.

In addition to dam removal, the project will include the installation of two new dry hydrants upstream and site improvements to enhance public use and preserve historic mill walls on the shore.

The dam, originally built in 1804, is deteriorating, with leaks making the dry hydrants and fish ladder inoperable during the summer.

“Basically the town had an asset that’s been declining,” Goode said. “We are trying to take that and make this site into a more valuable asset for the town by restoring the site, improving the fire protection, improving the fish passage, so it’s sort of one of those win-wins for the river and the community.”

Work will take place during business hours, from about 8 a.m. to 4 p.m. Monday-Thursday.

Basin Lane, a discontinued town road, will be temporarily closed to install piping for the new hydrants.

Goode said a sign on the road states this and more information will be posted on the town of Whitefield’s website as the project continues.

While removing the dam will only take a few weeks, most of the project will consist of the piping work for the new hydrants, Goode said.

The Atlantic Salmon Federation had to obtain six permits for the project. The permits require the contractor to minimize the disturbance of the area, according to Goode. To do so, the contractor is taking precautions such as using sandbags to lower the turbidity of the water and “sediment curtains” to direct sediment to one area for later disposal.

The Whitefield Board of Selectmen received approval for an easement over Brian Huntley’s property in late March to allow piping for the two new hydrants upstream.

An earlier easement, conveyed to the town by Clinton Bradbury, who owns a log yard on Route 17, allowed for the construction of a third hydrant on the West Branch of the Sheepscot last fall, which has already improved water access for the fire department, Goode said.

Whitefield Fire Chief Scott Higgins, in a press release from the Atlantic Salmon Federation, Midcoast Conservancy, and The Nature Conservancy,  said the new hydrants will ensure a reliable year-round water source in the Coopers Mills area.

Midcoast Conservancy Director of Water Conservation Garrison Beck, in the press release, said the project “is the first step to restoring critical spawning habitat for the first time in more than 200 years.”

The leaks in the dam prevent the upstream movement of alewives, Atlantic salmon, blueback herring, and other sea-run fish coming from the ocean to spawn in the Sheepscot, Goode said. Dam removal will encourage upstream and downstream passage of sea-run fish.

Whitefield voters approved the removal of the dam at the annual town meeting in 2016. The vote followed the unanimous decision of the Coopers Mills Dam Committee that removal was a better option than repairing the dam or leaving it alone.

The committee met monthly for a year and a half, starting in 2015.

“We had a great committee, which included people from the Coopers Mills community, the fire department, the historical society, along with a person with fishery expertise,” Whitefield Board of Selectmen Selectman Chair Tony Marple said in an email. Marple chaired the dam committee.

“We met with the Atlantic Salmon Federation and reviewed a variety of engineering studies, including the potential of hydropower, which wasn’t viable,” Marple said.

However, not all in the community support the project.

Dam neighbor Curt Whitehouse feels the town is losing a piece of its history. 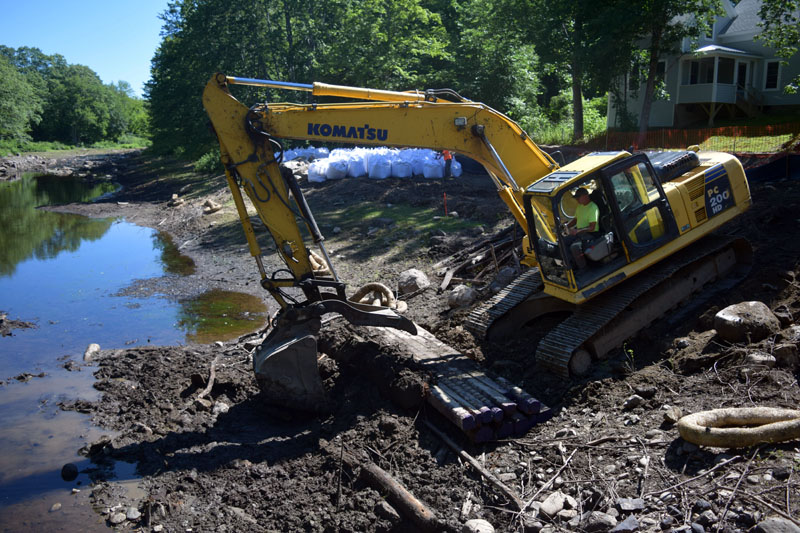 An excavator removes the remnants of a carriage road at the Coopers Mills Dam site Thursday, July 19. The contractor will remove the dam soon. (Jessica Clifford photo)

Whitehouse has a pitcher with a painting of the dam with two sawmills on it, one on each side of the river. At one time Coopers Mills had two sawmills, a cooper shop, and a shingle mill, all powered by water.

Whitehouse bought one of the turbines used to power a sawmill at the dam site. After the town acquired the property for back taxes, it sold the turbine to Bangor Hydro Electric around 1952. Whitehouse purchased the turbine from Bangor Hydro and returned it to Coopers Mills, where it sits at the former Abbott store site.

Whitehouse blames the lack of fish in the river on hardwood trees, whose leaves produce tannic acid.

“In the old days the river was lined with pine trees. Now it is all hardwood,” Whitehouse said. He also blames the replacement of seasonal camps with year-round homes on Long Pond for putting phosphates into the watershed.

Whitehouse owns three historic buildings next to the dam: the old post office, the old store, and the Cooper House. He purchased them to try to preserve a little history of Coopers Mills.

Whitehouse said a group of Wabanaki Indians visit his property every year. “They come every year and camp out and say prayers to their forefathers. They call it sacred ground,” Whitehouse said.

Across the road from his house is a former inn that was once on the stagecoach route between Augusta and Rockland. “It kind of breaks everyone’s heart,” Whitehouse said of tearing down the dam, which he considers a historic landmark.

John Miete stopped by the dam Monday and shook his head as he watched the demolition begin. He said his father and aunts and uncles learned to swim at the dam.

His grandparents lived in the house closest to the construction site, on the Jefferson side of the dam.

“I am very disgusted with the town of Whitefield,” Miete said. He would have preferred to see the dam repaired and the town put a rubber bladder in  to prevent the dam from leaking.

Miete said he did not think the new dry hydrants would be adequate for fire protection.

Miete’s grandfather, Chester Colby, used to saw lumber at the old mill. The state made him install a fish ladder. Miete said the fishway was only used by alewives and eels. “The salmon and rainbow trout jumped over the dam,” he said.

Colby was a master carpenter and built the Jackson mansion’s barn in Jefferson, now Le Barn. He also finished a barn started by his father at the former Shirley Varney property in Windsor at the age of 18.

Colby tore the mill down in Coopers Mills in 1952 or 1953, Miete said, then built a portable mill further upstream on the Basin Road.

Ray Joslyn, another visitor to the site during the beginning of work, lives on Long Pond and said the lowering of the water level at the dam did not affect water levels on Long Pond, a concern of some property owners.

Funding for the project was provided by several private donors, the National Oceanic and Atmospheric Administration, and the U.S. Fish and Wildlife Service.

The project partners are Midcoast Conservancy, The Nature Conservancy, NOAA, the town of Whitefield, and the U.S. Fish and Wildlife Service. Each partner is assisting the Atlantic Salmon Federation with the project, Goode said.

When work is complete, the site will have informational and historical placards and designated areas for river viewing and access. A short public event will take place upon completion.

According to the press release, the removal of the Coopers Mills Dam is the first phase of a multiple-year effort to improve habitat for migratory fish species along the Sheepscot River.

The effort will include changes to Alna’s Head Tide Dam in 2019, new fish passage at China’s Branch Pond Mill Dam in 2020, and upgrades to several stream crossings along the tributaries of the Sheepscot River.