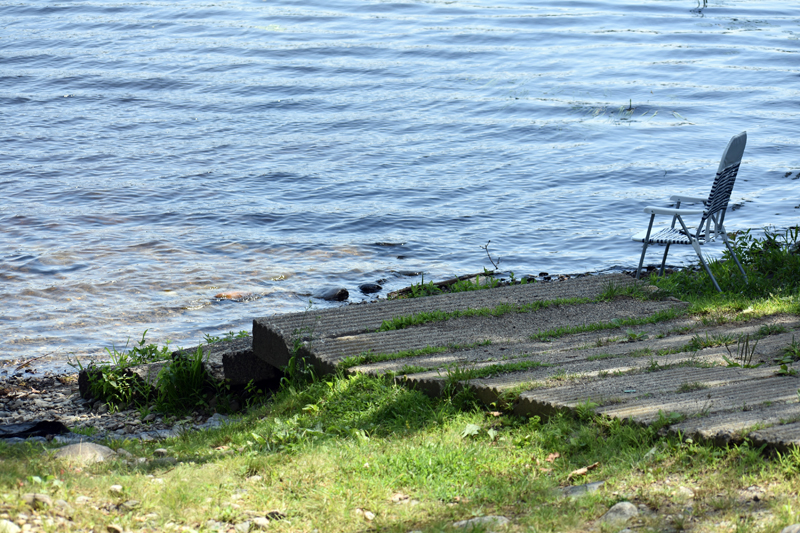 The carry-in launch at Dyer Long Pond is out of the water. The launches are designed to enter the water, according to Diano Circo, of the Maine Department of Inland Fisheries and Wildlife. (Alexander Violo photo)

Dyer Long Pond property owners expressed concern about the pond’s water level and what they say is the failure of a dam owner to maintain the water level during a hearing at Jefferson Village School on Thursday, July 26.

The hearing comes more than 12 years after the property owners filed a petition with the Maine Department of Environmental Protection.

The DEP held the hearing, a step toward the establishment of a water-level regime for the 423-acre pond. The presiding officer was DEP Director of Policy Christina Hodgeman.

Some of the 35 petitioners, as well as representatives of dam owner Richard Saltonstall III, who was not present, testified during the hearing.

In her opening statement, Hodgeman said the purpose of the hearing was to receive testimony from both parties as the department considers the establishment of a water-level regime and, if applicable, minimum flow requirements for Dyer Long Pond. 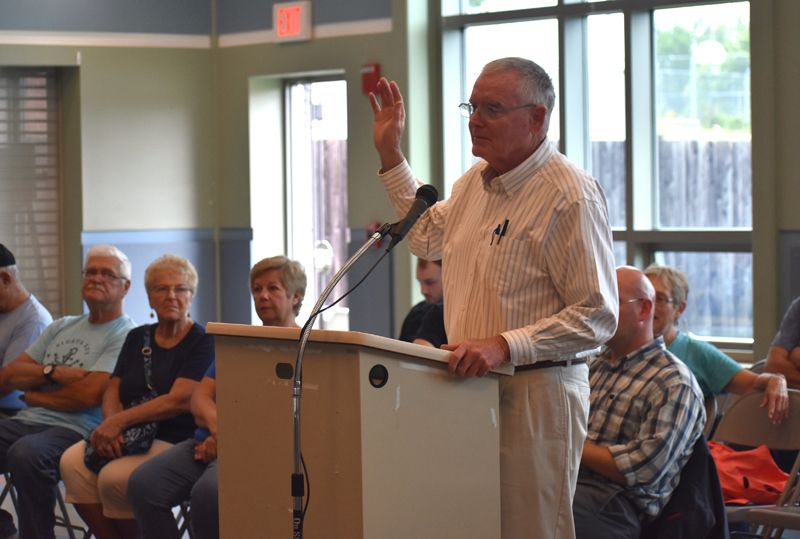 Tom Prouty is sworn in during the Dyer Long Pond water-level hearing at Jefferson Village School on Thursday, July 26. Prouty served as the representative for the petitioners. (Alexander Violo photo)

At the end of the hearing’s first session, Hodgeman set a due date for closing briefs from both parties as Friday, Aug. 31.

Prouty described the hearing as a positive experience, giving both sides an opportunity to have a civil dialogue on the dam.

“I think it was very well done. Everybody had a fair chance to express their ideas. It wasn’t confrontational. Everybody seemed to be listening to one another and enjoying the airing of the issues,” Prouty said.

Prouty said he appreciated testimony from the Maine Department of Inland Fisheries and Wildlife.

“I was thrilled with IFW. They seemed to want to take a proactive stance with problems around the pond,” he said.

Prouty said he feels the petitioners are about halfway through the process.

He said the petitioners started the process to hold an adjudicatory hearing in March 2006. He was surprised in September 2017 when he got a letter from the DEP.

“I was surprised and delighted. We got our day in court, so to speak,” Prouty said.

Regarding possible outcomes, Prouty said he likes one proposal to raise the pond’s water level by 18-24 inches at the start of the summer.

“I think it would be better for the wildlife and there would be less likelihood of boats hitting submerged rocks,” Prouty said. 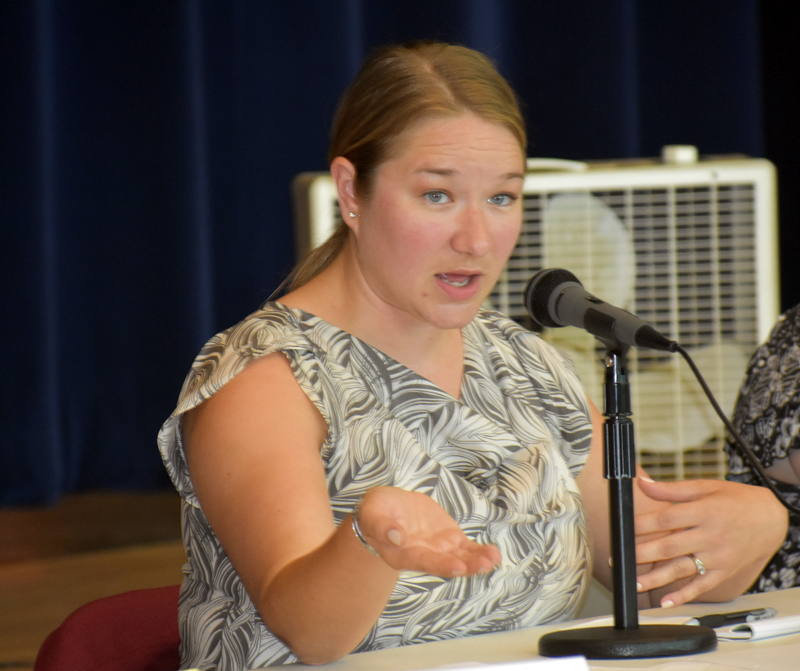 “It’s always good to have people get up and share their thoughts. It was good to hear all the information,” Olson said.

Olson expects the DEP to issue an order after the parties file their closing briefs.

“I believe the hearing officer will take the information under consideration and issue some kind of order consistent with the standards of statute,” he said.

Olson said he appreciated the scientific analysis presented by multiple state agencies at the hearing. He said it was the first presentation of scientific information regarding the dam and water level at Dyer Long Pond.

He said that since the early 2000s, Saltonstall has tried to balance the risk of flooding with property owners’ desires for higher water levels during the summer months.

“Historically, what my client tried to do was have a natural flow of water without adjustment of the stop logs. With a couple drier-than-normal summers, it created a sense the lake was drying up,” Olson said.

“From our perspective, we would be happy with any reasonable plan the DEP wants to prepare, as long as it is not overly burdensome,” Olson said.

Prouty opened the testimony, saying the lowering level of the pond led him to replace his previous dock system with an adjustable, rolling system. He said other waterfront property owners have to put on mud boots to reach their boats.

Prouty said multiple attempts to contact the dam’s owner yielded no results save for a confrontational voicemail. 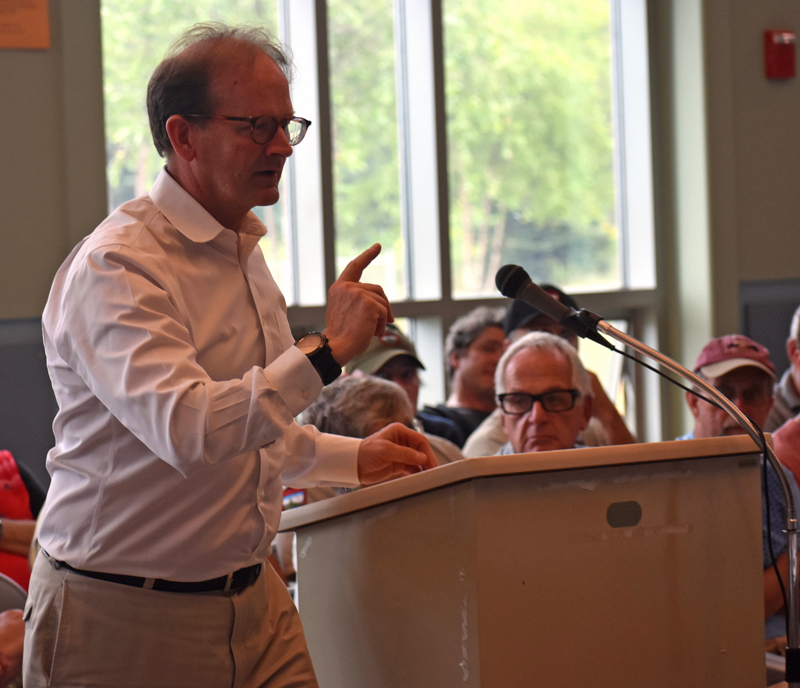 “The last 27 years of non-management by the dam owner needs to be addressed,” Prouty said.

Responding to questions from Howatt, Prouty said that to his knowledge, the last time stop logs were employed at the dam was around 1990, but that was prior to his time on the lake, as he purchased property in 1990 and built his camp with his wife about a decade later.

“I may not have been there at the right times, but I have never seen a stop log in there,” Prouty said.

Petitioner Steven Urkowitz said that when he first moved to the lake in 2003, the lake level would be high in the spring and would drop in the summer, but now a rock once referred to as “August Rock” is visible in the middle of June.

Urkowitz said the pond’s alewife hatchery dries up very quickly compared to his first four to five years at the property, and the water level has impacted loons that once nested on the pond.

“The ramp ends well before the point where the water begins,” Wronker said.

Petitioner Robert Cecerna, who built a house on the pond in 1970, said over the years he has noticed the changes.

“The lake is not as cool, the fish are not as big, and there are only a few alewives left,” Cecerna said. 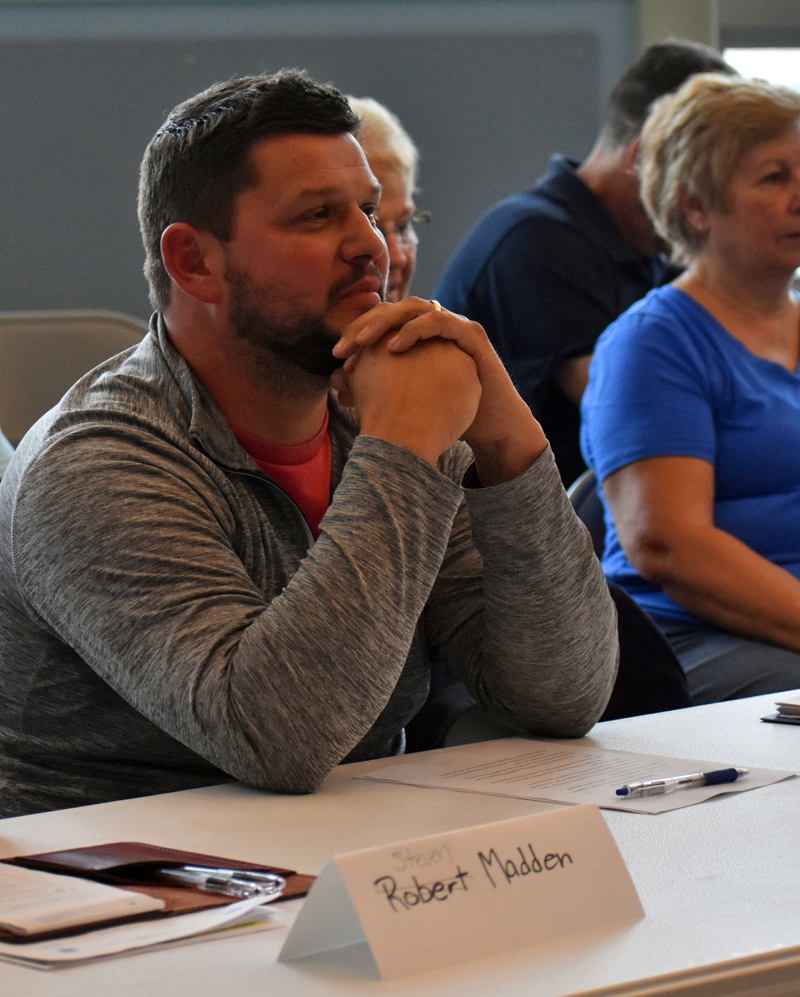 Olson opened his portion of the testimony by introducing Steven Madden, a resident of Dyer Long Pond, and dam operator Rod Grady, who grew up next to the dam and has lived there most of his life. Grady is 41.

Olson said Grady’s father was there when the dam was built and managed the dam before Grady.

According to Olson, the water level of the pond relies on natural flow. A single 2-by-8 board is in place at the base of the dam, and the dam’s spillway is managed to ensure alewife passage.

Grady said the last couple of summers have been drier than normal, leading water levels to drop very low.

Grady said if the water level is increased, the pond will still be subject to seasonable changes.

“The level in here we could certainly do, but I don’t know (if) doing it different than now will give it much more water this time of year,” Grady said.

Madden said the water has always gone up and down depending on the season.

“At the end of August, the water is always low and the fall rains replenish it … I’m happy with the way it is,” Madden said.

The adjudicatory hearing closed around 5 p.m. At 6 p.m., there was a session with testimony from members of the general public.

Department of Inland Fisheries and Wildlife Regional Biologist Keel Kemper and Chief Planner Diano Circo were among those offering testimony.

Kemper said Dyer Long Pond is an emerging wetland and, in response to questions from departmental staff, said wetlands function better when wet.

Circo said the hand-carry launch on the pond was designed to be handicapped-accessible and no longer functions in this manner.

Circo requested that the water level of the pond remain consistent so the department can plan necessary changes to ensure the launch complies with the Americans with Disabilities Act.

Circo said the pond at its current level could accommodate a modified launch, but a further drop in water level could make changes cost-prohibitive.