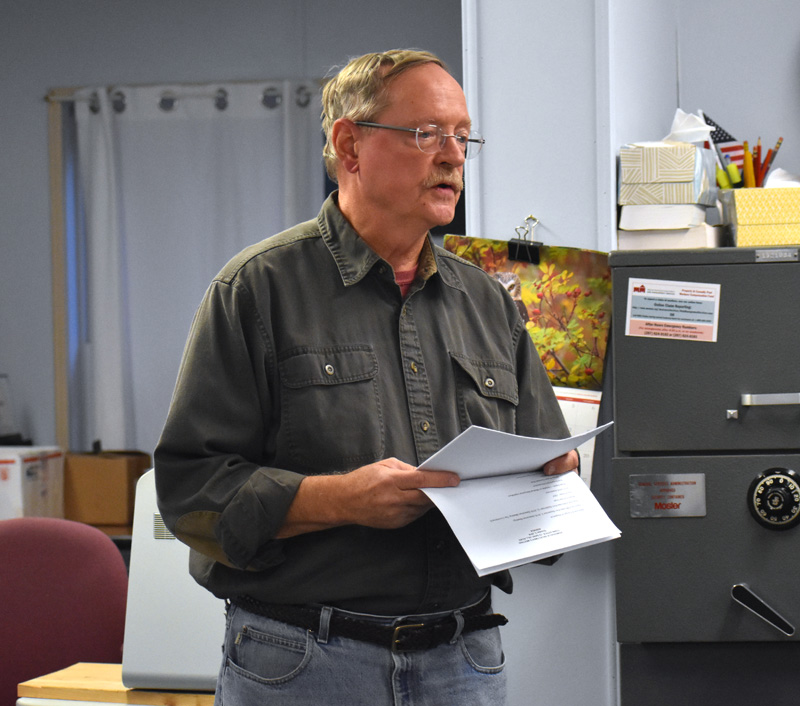 The town of Somerville may not receive an estimated $20,000 in Federal Emergency Management Agency funds related to the October 2017 windstorm due to the state’s objection to the fire chief’s burning fallen trees.

The Somerville Board of Selectmen discussed the town’s efforts to collect the funds and get back into compliance Wednesday, Oct. 3.

David Greer, the town’s outgoing emergency management director, said the pending FEMA grant will not be awarded until Somerville complies with federal and state guidelines.

According to Greer, a burn permit was acquired and Fire Chief Michael Dostie burned storm debris on his property.

However, Greer said, the Maine Department of Environmental Protection determined it was an improper burn and the ash has not been disposed of correctly, leaving Somerville in non-compliance with state law regarding burning tree debris from a storm.

The preferred method in lieu of burning is for the debris to be chipped and put in the woods, according to Greer.

According to Greer, the ash hasn’t been removed and part of the procedure for the town to return to compliance is to remove the ash from the property in an approved manner.

“The debris was gathered and burned, with a burn permit, but it was collected from different properties and became a burn site subject to certain state regulations,” Greer said.

Greer said he has been in contact with Eric Hamlin, of the DEP, who sent a detailed email on requirements the town must meet to become eligible for the grants. Greer recommended that the town comply with the requirements.

According to Greer, once the town is in compliance, the application for grant funding will go before the compliance branch of the U.S. Department of Homeland Security, which will proceed to process the town’s grant funds.

First Selectman Christopher Johnson expressed his displeasure with the decisions coming down from the state and federal government.

“I’m surprised with what DEP is saying. We are talking about trees from Somerville without inundation of any type,” Johnson said.

Greer said the problem lies in licensing. If a town wants to dispose of debris, it has to be properly licensed, and Somerville is not.

“What you burn in your stove from your land is your problem, but when you have debris from a bunch of properties and put it on one site, it becomes a disposal site and you have to be licensed to do that,” Greer said.

“This defies logic,” Johnson said. “If someone in camp in Jefferson gets wood from Somerville, what do they do? This isn’t the way we operate in the state of Maine. I’m thinking this is designed for people cleaning up superfund sites, not for tree debris.”

Johnson expressed concern that it might cost the town as much money to get in compliance as the town would receive in grant funds.

Board Chair and Third Selectman Darlene Landry said the town needs to find someone willing to take the project on and compare the numbers to see what is in the town’s best interest.

Members of the public asked if the town has recourse in the form of an appeal process.

Greer said a letter of non-compliance will be issued. When the town receives the letter, it can weigh its appeal options.

Frank Hample, a member of the RSU 12 Board of Directors, proposed that the board should investigate whether other municipalities have been adversely impacted by disposal regulations.

“How many have been impacted and how many legislators are aware of the problem?” Hample said.

Russell Gates, a member of the RSU 12 Board of Directors, said he has experience dealing with the U.S. Environmental Protection Agency in California. He conditionally volunteered to assist the town as it works to comply with DEP and FEMA guidelines, citing 20 years of experience from his time living in the Bay Area.

“Whatever the law is, whatever idea you want to come up with, it comes back to what the law is,” Gates said.

Gates said he wouldn’t be able to assist with the matter until December, but if he has the time, he will lend a hand.

The board unanimously voted to accept Gates’ conditional offer pending more information on the matter from the state and federal governments.

Landry said Greer and his wife, former First Selectman Susan Greer, will be relocating to California, so the town will need to find a new emergency management director.

Landry thanked the couple for their work in Somerville.

“Thank you for your service, you will be deeply missed in town,” she said.