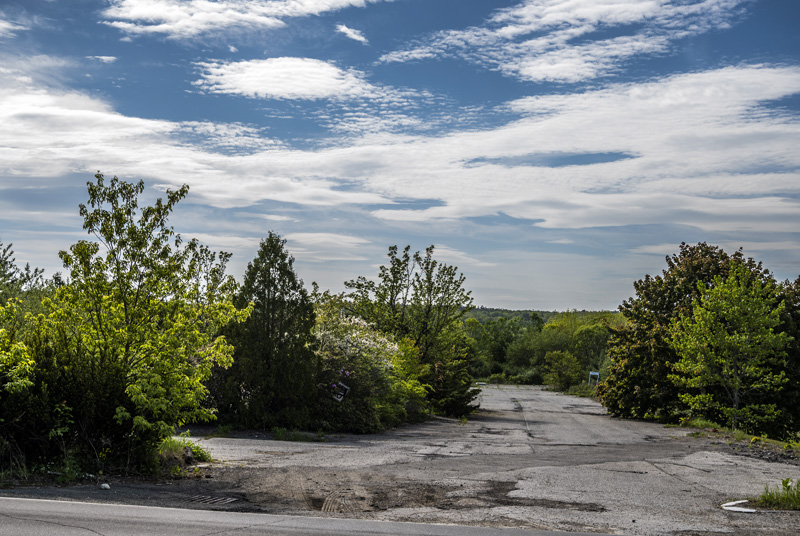 The Sylvania property, on Friendship Road in Waldoboro, Tuesday, May 25. An old shipping-and-receiving sign is visible in the distance on the right. (Bisi Cameron Yee photo)

Representatives from the Maine Department of Environmental Protection and members of Waldoboro’s Sylvania Task Force support the transfer of the Sylvania property to the town of Waldoboro.

Risk, both environmental and financial, was the primary focus during an informational forum on May 18.

Town officials organized the forum to inform residents about the property and present possible uses that may generate income for the town or recreational opportunities for residents. The DEP was invited to answer technical questions.

The riverside property on Friendship Road encompasses approximately 40 acres. Sylvania, a manufacturer of lighting components, bought the property in 1951 and, in the course of its operations, released chemical pollutants into the groundwater.

On Feb. 3 of this year, the selectmen voted to accept the gift. On Tuesday, May 25, the board authorized the town manager to sign a memorandum of agreement with Ledvance regarding the transfer of the property, expected to take place in the near future.

DEP Project Manager Max Luick said the DEP “very much approves and supports” the transfer of property from Ledvance to the town of Waldoboro.

According to Luick, a pump-and-treat system has been extracting contamination from the area and discharging treated water onto the surface of the site for 20 years. The state regards the site as “stable and under control.”

“We know the nature of contaminants, where they are and where they’re going,” Luick said.

Luick said the plume, or body of polluted water within the permeable bedrock, is trending toward the river and can be expected to reach the Medomak in the next 300-500 years, at which time “it will be no longer detectable with current technology.”

Luick said he could not provide an end date for the remediation. Maine law requires contaminated groundwater to be remediated to drinking water standards and “in many cases that’s just not a realistic goal in any reasonable time frame.”

Luick said that an environmental covenant is in place to protect human health, but it is not intended to stop redevelopment. Any redevelopment would be subject to review and DEP approval.

He said the conditions of the covenant are unequivocal and it would be a “needless exposure to liability” to allow residential development. He said that any plans should be for low-occupancy use.

Max Johnstone, a planning consultant to the town, said that it would be ideal to diversify the lot: The town may be able to have both development and a recreation area. Ideas for redevelopment include storage facilities, a one-story data center, a park, a river walk, tennis courts, or a solar farm.

Seth Hall, a candidate for selectman, asked if the town is going into the development business. “This is a radical shift of direction for the town,” he said. Hall asked who would manage any development, and what the rules and costs would be.

Town Manager Julie Keizer said, “There’ll be a lot more discussion about it — there’s nothing carved in stone about development.”

Resident Laura Buxbaum asked if there has been progress in reducing contamination.

Luick said there has, but called it “a slow process.”

Sylvania Task Force member Jan McMahon asked about the protocol if a neighbor wants to drill a well. “It seems like a public health risk we don’t know the answer to,” she said.

Luick said there has been no off-site detection of contaminants associated with the site and that the contaminated water is restrained in a bedrock aquifer under a portion of the site.

“We’ve established that there’s a very low risk. Risk is never zero. I can’t say with 100% certainty that wells would not be affected, but we are fairly certain that they would not be,” Luick said.

McMahon said she hopes the town will put in sentinel wells for additional testing. She said she favors accepting the property while being aware that uncertainties remain.

Sylvania Task Force member Mike Thayer said he is very supportive of accepting the gift, but is concerned with how the town can insulate itself from liability.

According to the DEP, if the contamination is not properly contained or if the plume gets into drinking water and the contaminants can be traced to the site, Ledvance will be held responsible.

Luick said that no off-site wells have been impacted or at risk in the last 30 years. “The plume is not moving off the property,” he said.

Keizer said the town will get pollution insurance and that she takes comfort in financial assurances from Ledvance, held at the DEP, that confirm the company has the means to maintain the cleanup operation.

Thayer said, “I just want reasonable assurance that the town doesn’t wind up with a big bill for cleanup because we’ve stepped on Ledvance’s process.”

Keizer said, “That’s what makes us have to be a good steward of the land. We have to respect those covenants.”

“I think the town has done the due diligence for what we are willing to take as a risk — we are insulating ourselves as best we can,” Keizer said.

Hall asked if the board of selectmen would commit to a binding vote of the town to accept the gift.

“Given the town’s history of property management, A.D. Gray being the perfect poster child, maybe we should do it differently this time — not take the gift but try to do the planning in advance and get permission from voters of the town to pursue this track,” Hall said.

Selectman Bob Butler said the voters spoke both when they allowed the board to accept gifts on the town’s behalf, with the approval of a routine article on the warrant for the 2020 annual town meeting by referendum; and again in November 2020, in the nonbinding referendum.

Abden Simmons, chair of the board of selectmen, asked to hear the qualifications of the Sylvania Task Force. Those qualifications ranged from a member who has researched the migration of contaminants through fractures in groundwater, to a member who did environmental work in the wastewater field for 40 years, to members with doctorates in fields like mineralogy, geochemistry, and geology from schools like Harvard and Johns Hopkins.

Selectman Jann Minzy said, “We got a group of people together who knew what they were doing. We listened to them.”

For more information, including a link to a video of the forum and a summary, as well as the environmental covenant between the DEP and Ledvance and a map of the site, go to tinyurl.com/35v6b5zw.