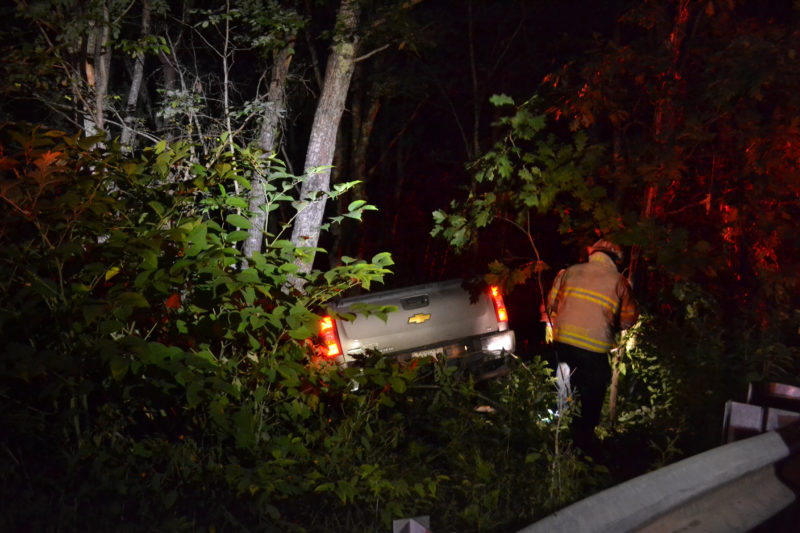 The Lincoln County Sheriff’s Office is seeking the driver of a 2012 Chevy pick-up who fled the scene of an accident near the railroad tracks on Mills Road in Newcastle the evening of Wednesday, Aug. 9. (Maia Zewert photo)

The Lincoln County Sheriff’s Office is actively searching for a driver who fled the scene of an accident on Mills Road in Newcastle the evening of Wednesday, Aug. 9.

Around 9:30 p.m., LCSO deputies observed the driver of a 2012 Chevy pick-up sitting in the middle of the intersection of Mills and Academy Hill roads in Newcastle, according to Lt. Brendan Kane. The driver made an improper left turn onto Business Route 1 and threw a lit cigarette out the window.

The deputies followed the truck onto River Road where they initiated a traffic stop, Kane said. The driver pulled into a private driveway before backing the vehicle onto River Road facing north.

When the deputies approached the truck, the operator drove away. Due to traffic, the deputies lost sight of the vehicle, Kane said.

While searching for the pick-up, a passerby called the Lincoln County Communications Center to report a pick-up truck off the road near the railroad tracks on Mills Road in Newcastle, Kane said. When deputies arrived, the driver had fled on foot.

Deputy Kevin Dennison and K-9 Duke tracked the driver along the railroad tracks but lost the scent. It is believed the subject was picked up by another vehicle, Kane said.

The investigation is still on-going, Kane said. Anyone with information about the accident is encouraged to contact Deputy Ryan Chubbuck at 882-7332.