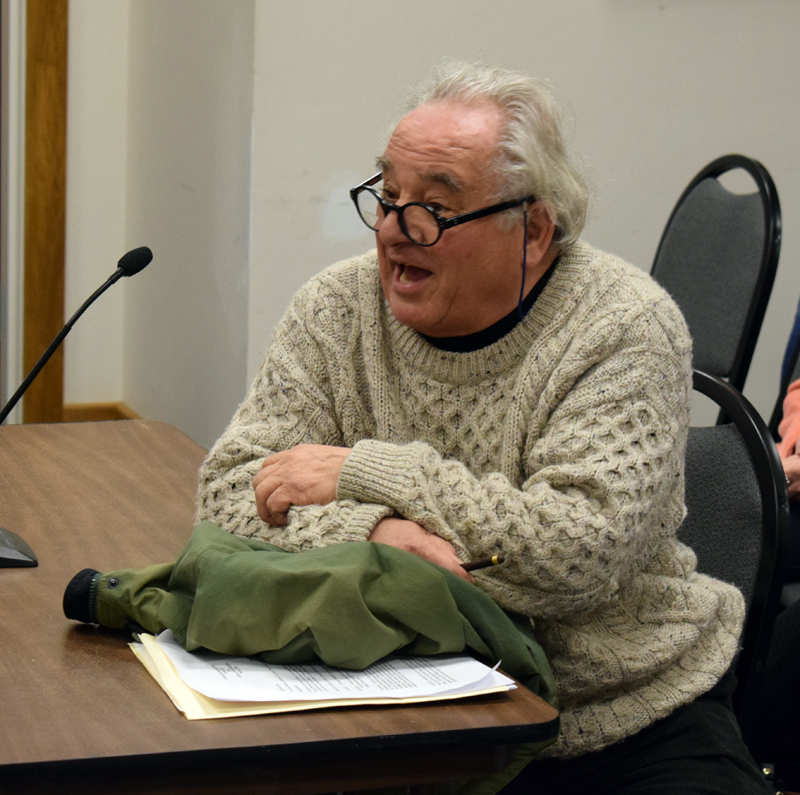 Damariscotta resident Rolf Winkes speaks at a public hearing about a historic preservation ordinance Wednesday, Feb. 5. Winkes and several other residents asked the Damariscotta Board of Selectmen to delay a vote on the ordinance. (Evan Houk photo)

Despite some recent public opposition, a historic preservation ordinance will go to a referendum vote in Damariscotta on Tuesday, March 3.

After a public hearing about the ordinance Wednesday, Feb. 5, the Damariscotta Board of Selectmen voted to remove it from the March 3 ballot to allow further review and changes to the document.

The selectmen wanted to allow time for everyone who voiced concerns at the public hearing to participate in the process of finalizing the ordinance.

However, since the referendum was already underway, the Maine Municipal Association recommended that the selectmen rescind their motion. As of Feb. 5, 13 absentee ballots had been sent out and three had been returned.

The selectmen held a special meeting Monday, Feb. 10 to rescind their motion.

Town Manager Matt Lutkus said in an email to the selectmen that town staff will continue to work on changes to the historic preservation ordinance up until the vote March 3.

About 24 people attended the public hearing about the ordinance. The majority of the seven residents who spoke asked that the ordinance be taken off the ballot because they were not aware of it until recently.

Robert “Haas” Tobey introduced the ordinance, saying the comprehensive plan passed by voters in June 2014 lists preserving the character of the downtown historic district as one of the town’s goals.

Tobey said the town’s land use advisory committee, of which he is vice chair, has been working on the historic preservation ordinance since 2014.

“The committee has worked very diligently. We have consulted with lawyers, lawyers that specialize in historic preservation. We have read historic ordinances and studied historic ordinances, not only from towns of a similar nature in Maine, but elsewhere in New England and around the country,” Tobey said.

The proposed Main Street historic district is already on the National Register of Historic Places. However, this federal designation does not provide any protection from demolition or substantial changes to historic buildings.

Town Planner Bob Faunce said all the owners of buildings in the proposed historic district have been notified by certified mail of the historic preservation ordinance. He said he received confirmation of receipt from all but one building owner. 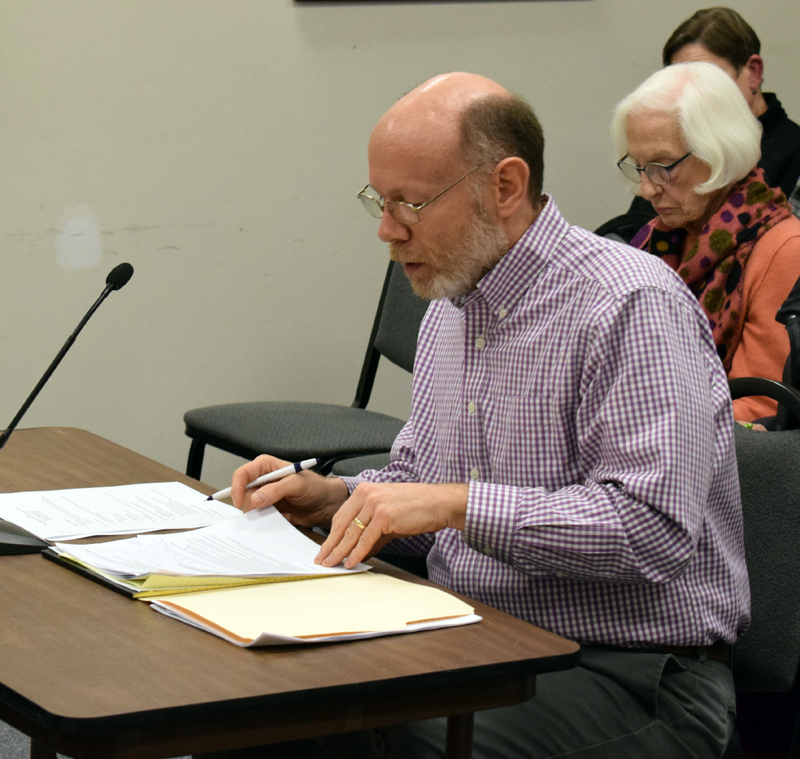 David Levesque, an attorney with an office in downtown Damariscotta, speaks at a public hearing about a historic preservation ordinance Wednesday, Feb. 5. Despite concerns, the selectmen could not remove the ordinance from the ballot because absentee voting is already underway. (Evan Houk photo)

Rolf Winkes said he believes the ordinance is too strict and should be worded more carefully. He said the ordinance goes beyond what even the United Nations Educational, Scientific and Cultural Organization requires of historic districts.

“I really urge you to give this some time so people can study this,” Winkes said.

Elaine Eskesen, owner of the historic Nathaniel Austin House downtown, said she would like to be involved in developing the ordinance. She said she was not aware of the ordinance and never received a certified letter.

Eskesen asked the selectmen to push back the vote to allow time for more people to get involved in the process. She said there is a group of 12-14 concerned residents meeting on their own to discuss the ordinance.

David Levesque, an attorney who has a practice in downtown Damariscotta, requested that the ordinance be tabled for further review until annual town meeting.

Levesque had a few suggestions for specific changes to the ordinance. One was to set aside one of the seats on a three-member historic preservation review commission for someone who owns property in the historic district.

Marilee Harris, who serves as pastor of the Damariscotta Baptist Church and lives in the parsonage on Main Street, also asked for the vote to be delayed. She said she and many other residents would like to support the ordinance, but do not feel it will meet the objectives it lays out as written.

Lutkus encouraged residents to sign up for an email list concerning the historic preservation ordinance so that they can stay informed.

“We do try earnestly to get out the word on all the activities of the town. … It’s disheartening to hear folks say they weren’t aware of (the ordinance),” Lutkus said.