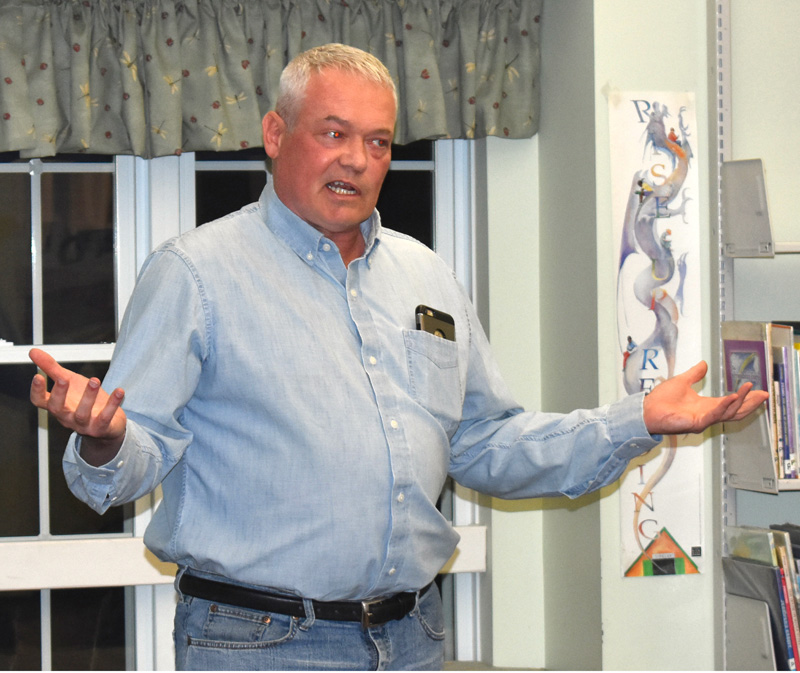 Tim Wells talks about his plans for the A.D. Gray property during a public meeting at the Waldoboro Public Library. The first phase of the project would convert the former school into 20-27 housing units. (Alexander Violo photo)

The developer who wants to transform the former A.D. Gray School in Waldoboro into housing fielded questions from the public during a meeting at Waldoboro Public Library on Wednesday, Oct. 16.

“It would be a tragedy for a building like this to be torn down and an asset like this lost,” Tim Wells said at the meeting. “I think it is an asset that has value and it would be a shame to pay money to tear it down.”

The building has been vacant since Medomak Middle School opened in 2009.

The meeting provided residents with a chance to ask questions and learn more about Wells’ concept to convert the structure into residential condominiums.

“The intent is to have people become permanent residents, part of the community,” Wells said. “They will have something that has value.”

Wells graduated from high school in Bangor and left the state to serve in the military and pursue his career, but returned with an interest in helping the state revitalize its economy.

“I care very much about this state and small communities. That’s really what got me interested in this project … because I care about Maine and the Midcoast and because even developers like to feel some satisfaction from what we do,” Wells said.

Wells said the first phase of the project would include the acquisition of the 84-year-old, 30,000-square-foot building and 1.6-acre property from the town, followed by a rehabilitation and renovation of the building, along with the addition of one or two floors. He believes the existing building to be structurally sound.

His plan calls for about 20-27 housing units in the finished building – 20 if he adds one floor and 27 if he adds two.

Town officials have debated what to do with the property, which has been on the market since early 2018.

Wells said the type of housing he wants to build could attract younger families and improve Waldoboro’s economy.

“This is a really great opportunity for the town. If you study how towns build economic capacity, the first thing that comes up is housing. Jobs never come before housing. A business can’t operate without a workforce,” Wells said.

Mark Hallowell, of School Street, lives next to the school and raised concerns about the height of the building, asking if Wells could move forward with a three-floor building instead of four.

Wells said this is a possibility, although the extra floor would allow the cost of construction to be spread out to additional units.

“I bought a house and fixed it up in a residential neighborhood,” Hallowell said. “I was hoping they would turn (A.D. Gray) into a senior center.”

Ellee Simons, who serves as co-director of the Waldoboro Food Pantry and lived across the street from A.D. Gray for 30 years, said the building “can be an asset.”

“Waldoboro has a ton of assets. We’re all used to hearing it’s the poorest town in Lincoln County, but we have a ton of assets in this town – a vibrant art community, a lot of churches,” Simons said.

Simons said she does not see any issues with the first phase of the project, but further development could lead to the need for an access road.

“I can’t imagine with the first phase there would be any more impact than when there were children, school buses, and parents there every day, but when you’re talking about additional buildings, there could be a traffic problem and you might consider bringing in an access road for additional buildings,” Simons said.

Wells said his three-phase project could include a subdivision and multiple commercial buildings. A diagram he showed to the Waldoboro Planning Board last month showed more residential space, office space, and a small hotel.

The second and third phases of the project will depend on what businesses Wells can attract to the property. At the library, he said the area’s prominence in agriculture and aquaculture could be parlayed into space for related businesses or state offices.

Simons cited “The Death and Life of Great American Cities,” a book by Jane Jacobs, saying the book’s theory is that, in order for a community to thrive, it needs diversity, including different jobs, people, and age groups.

John Morris, a former member of the town’s planning board and comprehensive plan committee who has developed apartments in Waldoboro, said the project at A.D. Gray has potential for the town.

“As a developer, it wouldn’t be my first choice. It could be a headache to do, but the potential there is huge, in terms of Waldoboro. I would like to see it succeed so we all can enjoy it,” Morris said.

At the start of the meeting, criticism of the potential project prompted village resident Sandra O’Farrell to suggest that attendees listen to Wells’ presentation before piling on with criticism or questions.

The criticism focused on the potential height of the building and potential future buildings, their impact on the neighborhood, and the burden the buildings could place on the fire and police departments.

Dorothy Petersen agreed with O’Farrell, saying residents should hear the developer out before making up their minds on the project.

“I’m disturbed by the tone of this meeting. We are all here to hear about the project and we don’t know enough yet to make a decision and be so entrenched in a corner. Tim (Wells) is offering something that may or may not be the right thing, but people are being rude and that just makes me sad,” Petersen said.

Petersen said she is selling a house and does not want to buy another, but her housing options are limited if she wants to stay in the area.

“It would be nice to have other options. I really just think we need to listen to one another,” Petersen said.

“My hope is this really helps to attract people and bring some new housing options to Waldoboro,” Wells said. “There is a need for more housing and this could help bring some new neighbors in, lead some people to look at Waldoboro and see they are doing something creative and think maybe that is something we would like to be a part of.”