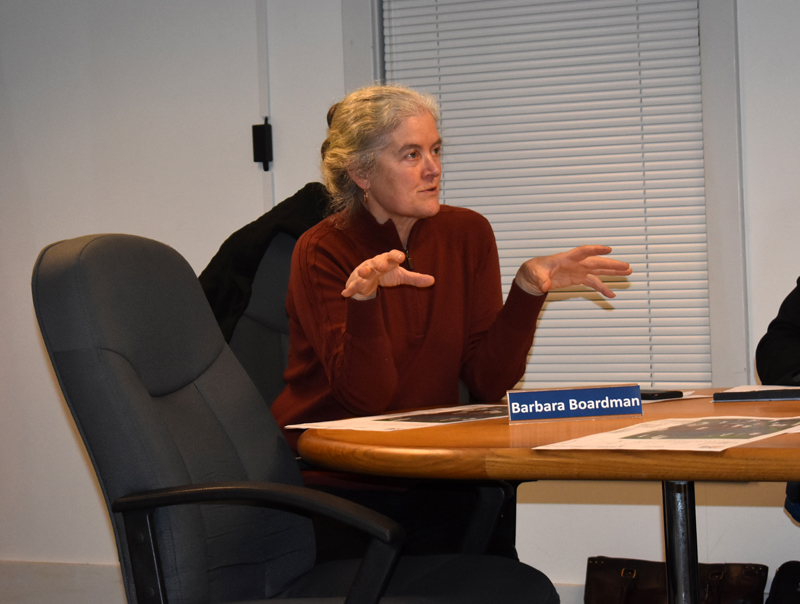 A New Hampshire developer plans to build a 3-megawatt solar farm on more than 10 acres on North Nobleboro Road in Waldoboro. A planning consultant to the town believes it would be the largest solar farm in the county.

The Waldoboro Planning Board held a pre-application meeting on the proposal Wednesday, Feb. 12.

The board met with Thomas Tetreau, a project manager with Stantec who is working with the project’s developer, SunRaise Investments, a solar energy company based in Portsmouth, N.H.

Tetreau said the developer would operate the solar farm through a lease agreement with the landowner. He said the project would include a solar array of 8,460 panels.

The solar farm would dwarf the 110-kilowatt municipal array at the nearby Waldoboro Transfer Station and would generate far more energy.

The total fenced area of the project is 10.7 acres. A site plan shows panels filling the entire fenced-in area.

Max Johnstone, a planning consultant to the town of Waldoboro, believes the farm would be the largest in Lincoln County. A 15-acre solar project is currently in front of the Rockport Planning Board, he said.

The site overlaps two properties owned by the same landowner, according to Johnstone. With both properties factored in, the project would take up less than 40% of the site.

During the meeting, Tetreau fielded questions from planning board members and asked some questions of his own.

Tetreau asked the board about complying with the town’s resource protection zone and ensuring the solar farm meets town ordinances, specifically regarding selective clearing of larger trees on the property.

“It will be what is allowed in the resource protection zone, not clearing everything, just tall trees,” Tetreau said.

Board member Barbara Boardman asked about the type of panels planned for the solar farm. 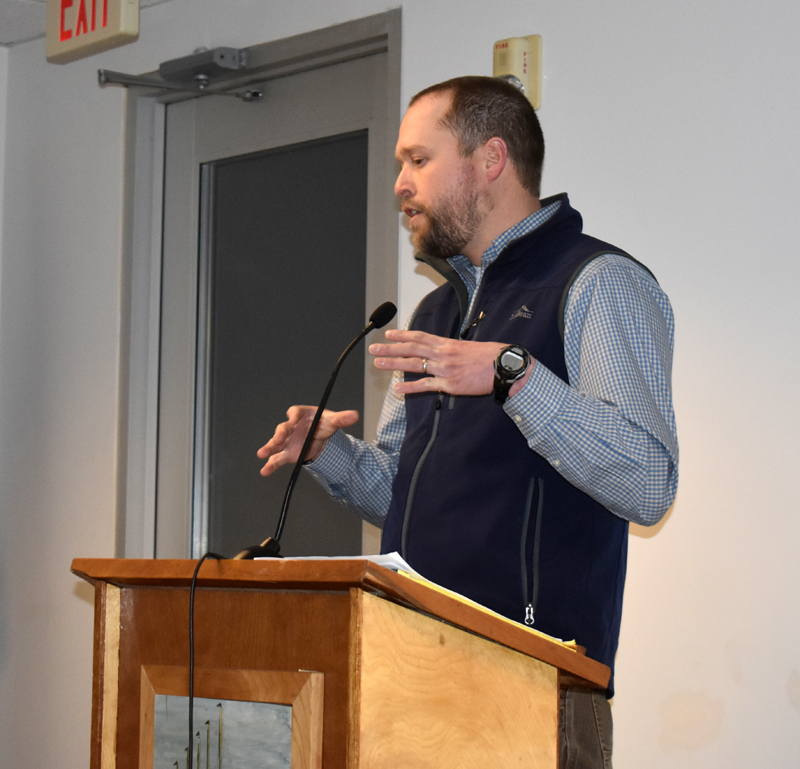 The solar farm would utilize a photovoltaic system, according to Tetreau, who said the farm’s inverters would convert the power for the larger consumer power grid.

Board member Jim Russo said solar farms utilize systems that convert power from direct current to alternating current, so it can go into the power grid.

Board member Sara Hotchkiss asked about lighting at the solar farm and whether it would impact birds or insects.

Tetreau said the panels have small lights, but they are not overly visible.

“For the most part there are no lights. They will have to use lights for maintenance work a couple of times a year,” Tetreau said.

Board Chair Scott Simpson asked about vernal pools on the property.

“We surveyed it in October and found an area with the potential to be a vernal pool. We’ll confirm it during the spring season. We decided to be conservative and call it one,” Tetreau said.

Tetreau said the U.S. Army Corps of Engineers and the Maine Department of Environmental Protection have been contacted about the project.

Boardman asked about a proposed chain-link fence on the property, whether it is necessary and whether it would inhibit the travel of wildlife through the land.

Tetreau said there would be a space under the fence to allow wildlife to pass through.

Boardman asked if the solar farm would be visible to motorists on North Nobleboro Road.

Tetreau said that was possible.

Boardman requested that more information be made available to the board at the time of a formal site plan review.

Board member John Kosnow asked if the solar farm warrants a site visit, indicating he would have a hard time voting on the matter without a visual understanding of its impact on the land.

After discussing the matter, the board decided against a site visit. It was recommended that board members could view the site themselves if interested. 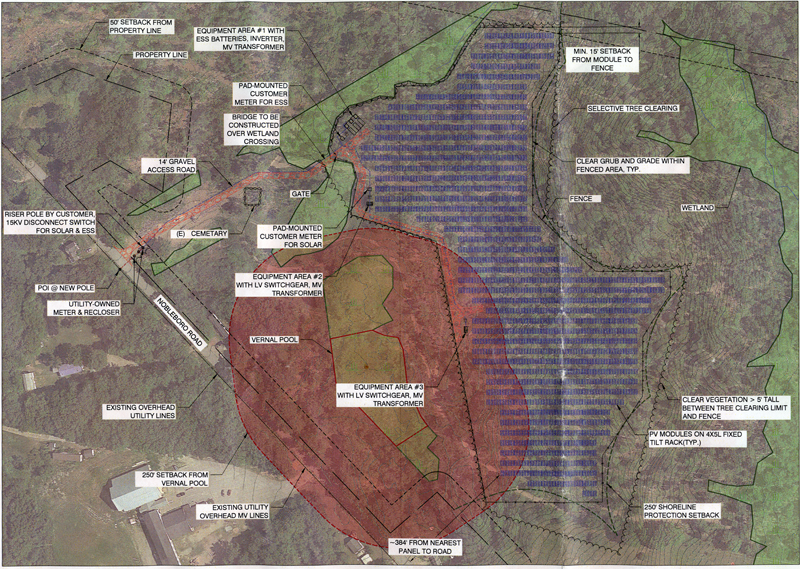 A site plan of a proposed solar farm on North Nobleboro Road in Waldoboro, with the solar panels in blue.

Simpson asked when the board could expect a formal application from the developer.

Tetreau said he expects the developer to proceed as soon as possible, citing a competitive funding process through the Maine Public Utilities Commission. He said a formal application could come before the board in the summer.

Ron Phillips, a Waldoboro resident, asked about who would purchase the power generated by the solar farm.

According to Tetreau, a buyer will be lined up as the project progresses.

Boardman and Simpson asked about the tax impact of the development, but an answer was not clear.

Russo asked what would happen when the panels come to the end of their life span.

“One other thing that comes to mind is, if they last 40 years, what happens in year 41?” Russo said.

Tetreau said specifics of the project would be spelled out in the lease agreement with the landowner. The developer’s intention is to enter a 30-year lease.

“They will remove and upgrade the panels as needed,” Tetreau said.

Simpson said that before the board holds a formal site plan review, it will need to receive documentation of the lease in the developer’s application.

“We need proof of ownership, something to show the owner has the legal right to do this on their property,” Simpson said.

Tetreau said he could provide a lease agreement, with confidential information redacted, to the planning board.