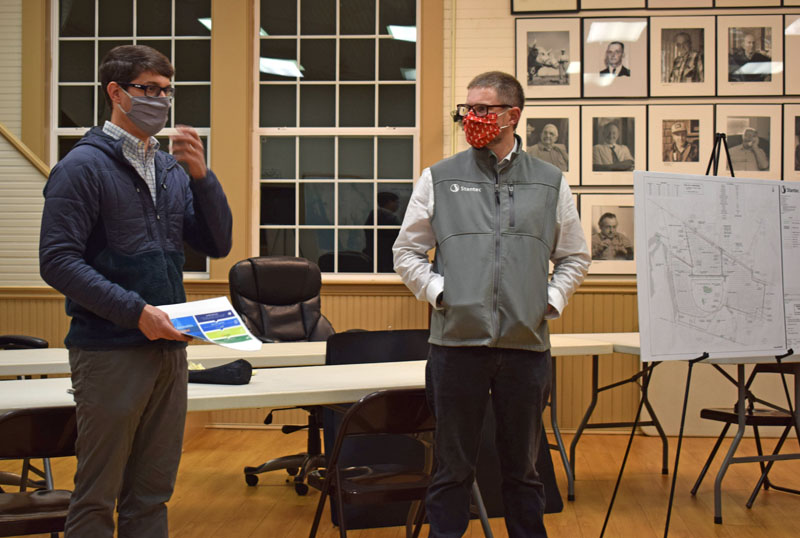 From left: Allen Tate, of EDF Renewables Distributed Solutions Inc., and Eben Baker, of Stantec, present a plan for an approximately 5-megawatt solar array on Christian Hill Road in Bristol during a public hearing at the town hall, Thursday, Nov. 5. (Evan Houk photo)

A developer plans to build an approximately 5-megawatt commercial solar farm on 32.9 acres off Christian Hill Road, just north of the village of Bristol Mills.

The Site Location of Development Act requires a public hearing for any land disturbance over 20 acres.

Allen Tate, of EDF Renewables, and Eben Baker, of Stantec, addressed town officials and one member of the public at the hearing.

He said this is typically how EDF Renewables organizes solar projects for the permitting process and leasing of land.

EDF Renewables is a North American branch of Électricité de France, owned by the French state. The branch is based in Columbia, Md., but Tate said he works out of West Lebanon, N.H.

“France’s strategy has been to generate almost exclusively from nuclear and renewables, and EDF is exporting its zero-emissions strategy elsewhere,” Bristol Town Administrator Chris Hall wrote in a recent newsletter.

Stantec is an engineering firm involved in the project.

After the presentation, Bristol Code Enforcement Officer Joseph Rose said the developer has not applied for a building permit yet. He said the town will not require any more information beyond what the DEP requires.

Under state law, land that contains a solar array can only be taxed as undeveloped land. The arrays are exempt from taxation.

The company plans to start construction in the second quarter of 2021 and finish it by early 2022 or sooner.

Tate said construction will take six to nine months and EDF Renewables plans to use local contractors on the project. The array will not be visible from Bristol Road.

Electricity generated from the solar array will be sold to Maine businesses as a credit on their Central Maine Power Co. bill.

Another company, Midcoast Solar LLC, is planning to build a community solar array off Bristol Road, across the road from the CMP substation.

Baker said the difference between a commercial array and a community array is that a commercial project sells power to a handful of businesses rather than a long list of individuals.

“The way that we operate, it’s a lot smoother to work with a handful of customers than contract with several hundred,” Tate said.

Tate described solar arrays as a passive land use with minimal disruption. He said grass will be seeded underneath the arrays and the land will be mowed twice a year. The initial contract for the array is for 20-25 years, with options for five-year extensions that could lengthen its life to 35 years.

“At the end of the project life, you can remove it and return it to agriculture, forestry, or some other type of use,” Tate said of the land.

A handout provided by EDF Renewables examines the environmental impacts of the project — saying that once installed, the solar arrays will generate “clean, renewable electricity without using water, creating emissions, or producing waste products.”

The company says that as part of the DEP process, potential impacts on wetlands, sensitive species, and cultural and historic resources are being studied. Best management practices will be utilized for erosion and sediment control during construction and trees and other vegetation along the property boundary will be maintained to the extent possible.

Baker explained in detail each of 26 areas involved in the Site Location of Development Act permit.

A 25-foot buffer of existing trees will be maintained along Christian Hill Road and visibility from surrounding parcels will be less than 1%, Baker said.

The project will be monitored online 24/7 and the perimeter will be fenced.

At the end of the array’s life, it will be decommissioned and removed by the developer, Tate said.