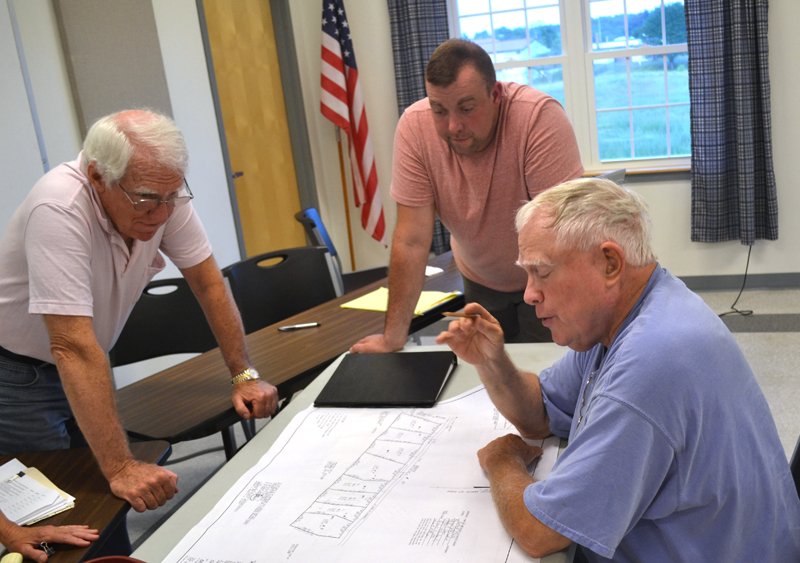 From left: Whitefield Planning Board members Steve Sheehy and Jake Mathews look on as Steve Smith discusses his plans for his Route 17 property during the board’s Wednesday, July 19 meeting. (Abigail Adams photo)

The Whitefield Planning Board will soon send out a survey to residents about cluster housing developments to gauge sentiment on revising town ordinances to enable the developments.

The survey was prompted by an inquiry from property owner Steve Smith, who previously approached the board with a proposal to create a housing complex for disabled veterans, planning board Chair Jim Torbert said.

Whitefield would have to change its minimum lot size and subdivision ordinances to allow for multiple-unit housing for elderly and disabled residents, Torbert said. Currently, the minimum lot size ordinance requires 1 1/2 acres per dwelling.

The developments would also require zoning in Whitefield, planning board members said. Currently, Whitefield does not have zoning to designate areas of town where specific types of developments can go. “We’re that primitive,” Torbert said.

The survey will ask residents whether Whitefield should explore zoning. Residents will also be asked if they are in favor of cluster housing and if it should be limited to certain areas of town, such as Route 17, planning board member Marianne Marple said.

Smith has not submitted an official application for the proposal, or approached the board again since his initial inquiry about a month ago, Torbert said. Smith did attend the planning board’s Wednesday, July 20 meeting, however, to discuss the possibility of obtaining a variance for an expansion of his storage unit on Route 17.

Smith hopes to build two new structures on the lot now home to Augusta Road Self-Storage, he said. He is debating whether to add two additional storage units, or one storage unit and a multiple-unit commercial building for businesses that would benefit from easy access to storage, he said.

“I need to expand my business,” Smith said. “I’m just trying to do it in a sensible manner.”

Smith would like to build the additional storage unit just a few feet from the boundary of the lot home to Aunt Gin’s Restaurant. Smith also owns the Aunt Gin’s lot, but said he would use landscaping to create a visual buffer between the storage unit and the restaurant.

However, the planned location for the structure would require a variance from the planning board on the setback requirements in the development ordinance. The storage unit could be built on the other side of Smith’s property; however, Smith is concerned it would create a hardship for a neighbor whose house is close to the property line.

The planning board does have the ability to grant a variance for extraordinary hardships or special circumstances, but a formal application must be submitted before the board could consider such a request, planning board members said.

If Whitefield moves to establish zoning, it would impact the current authority of the planning board, which would no longer be able to grant variances to town ordinances, planning board members said. Variance applications would instead go to the appeals board.