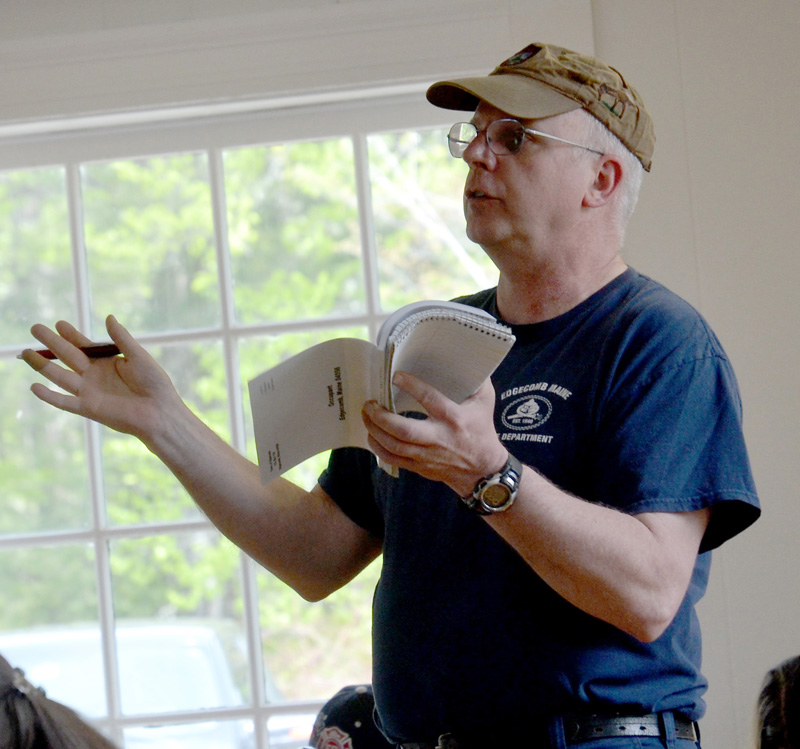 Edgecomb residents will soon vote on the purchase of a new fire truck after an overwhelmingly positive conversation during the annual town meeting Saturday, May 19.

The discussion took almost an hour of the four-hour meeting, during which residents also approved the $2,869,172 education budget, authorized the town to borrow $88,500 for the purchase of a new school bus, and made quick work of the municipal budget.

Edgecomb Fire Department Capt. Tom Trowbridge introduced the department’s hopes to purchase a “fast-attack” vehicle, estimated to cost $247,670. The new vehicle would be the first vehicle firefighters take to any call, whether a car accident, fire, or medical call.

The Edgecomb Board of Selectmen originally planned to put the truck before voters at the annual town meeting. Running out of time to complete necessary steps, they ultimately decided to allow for discussion only to “keep the conversation going,” Selectman Mike Smith said.

Resident Robert Crink spoke about his time at the May 9 presentation and what he learned from his conversations with the distributors of the truck.

“What I’ve gotten is, we have two antiques, and the only likely place we’ll be able to sell them is to a parade,” Crink said. “I don’t want to pay more taxes, but for this, I think it’s a good piece of equipment.”

Smith updated residents on the selectmen’s research into whether the town can use funds from its Tax Increment Financing district to offset the purchase. While a special town meeting to authorize the purchase of a truck could take place relatively soon, an amendment to the TIF could take months, Smith said.

Edgecomb would need to hold an additional special town meeting to amend the TIF. The amendment would then go to the Maine Department of Economic and Community Development for approval, Smith said.

If the change is approved, Smith said TIF funds could cover 75 percent of the cost of the fire truck.

Mark Graham, a former firefighter whose son serves on the department, asked if the town had considered contracting a grant writer to seek funds for the truck. 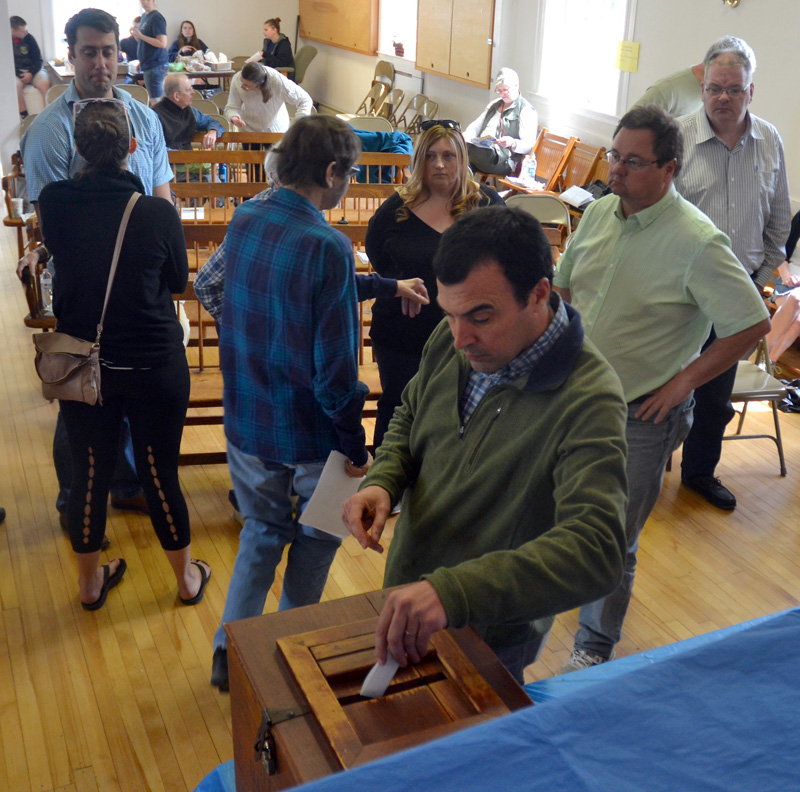 Former Selectman Jo Cameron also stressed the importance of looking for grants, as the town would not need to repay the funds.

During their regular meeting Monday, May 21, the selectmen scheduled a special town meeting for June 4 to vote on the purchase of the fire truck.

In non-fire truck business, residents voted to appropriate and authorize the town to borrow $88,500 to purchase a new school bus with no discussion. With an estimated interest rate of 3.5 percent over a term of five years, the town will pay approximately $96,599, according to the warrant article.

In a brief presentation before the warrant articles related to the education budget, Edgecomb School Committee Chair Tom Abello told residents Edgecomb Eddy School has seen increased enrollment due to students coming in from other towns. The resulting tuition revenue has helped limit the impact of the budget hike on Edgecomb taxpayers.

Residents also approved $20,000 for an ambulance service, however, the town has not determined what agency will provide the service. The selectmen plan to conduct interviews with the Wiscasset Ambulance Service and the Central Lincoln County Ambulance Service.

Edgecomb, along with Westport Island, had a one-year contract with Wiscasset Ambulance Service at a cost of $3,000 per year. However, the cost of the contract will rise this year to $6,500, and the service is asking Edgecomb to pay for residents’ unpaid bills, approximately $15,000 per year, Selectman Ted Hugger said.

Central Lincoln County Ambulance Service has provided the price of $20,000 to serve the town.

A resident asked if Edgecomb would be responsible for the debts of people who require ambulance service in Edgecomb but don’t live in the town.

Wiscasset Ambulance Service Director Toby Martin said the service would only request payment for residents, and it takes “up to four months” for the service to get to the point of seeking collections from the town.

Similar to last year, residents discussed but ultimately decided against approving the original funding requests from the Wiscasset Public Library and Boothbay Harbor Memorial Library rather than the amounts recommended by the Edgecomb Budget Committee.

Resident Martha Speed made the motion to approve the requested amounts of $7,500 for the Wiscasset Public Library and $4,000 for the Boothbay Harbor Memorial Library. The budget committee had recommended $4,500 and $2,000 for the libraries, respectively. 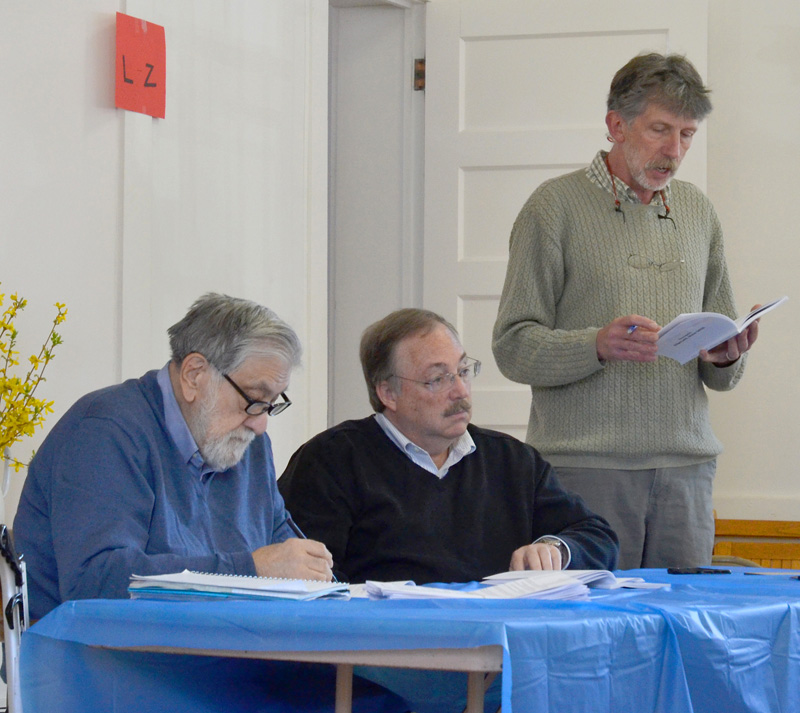 The Wiscasset Public Library letter was “underwhelming,” Brennan said, and the committee felt the $500 increase from last year’s amount was “more than fair.”

After discussion, a motion to go with the budget committee’s recommended amounts of $4,500 and $2,000 passed 40-16, and the article was approved.

Voters agreed to appropriate $1,000 for a future wayfinding project with Boothbay and Boothbay Harbor’s joint economic development committee. Edgecomb has been involved with the committee as a non-paying member for years as a way to stay involved with conversations about development on the peninsula, Hugger said.

In the future, the joint economic development committee hopes to complete a wayfinding project, which would include erecting signs to help both tourists and locals, Hugger said. The funds Edgecomb voters approved would be used for signs in town and for Edgecomb landmarks, he added.

The budget committee estimated the county tax assessment will be $302,257, an increase of $8,803 or 3 percent from the previous year.

However, due to the use of state funds for education, surplus, and various other non-property-tax revenue sources, the amount to be raised through property taxes is $3,550,917, an increase of $107,097 or 3.11 percent.

In the only contested election on the ballot, Rebecca Graham and incumbent Patricia Jeremiah were elected to three-year terms on the Edgecomb Planning Board, defeating incumbent Jack French. French was the board’s chair. Graham received 35 votes, Jeremiah 31, and French 20.