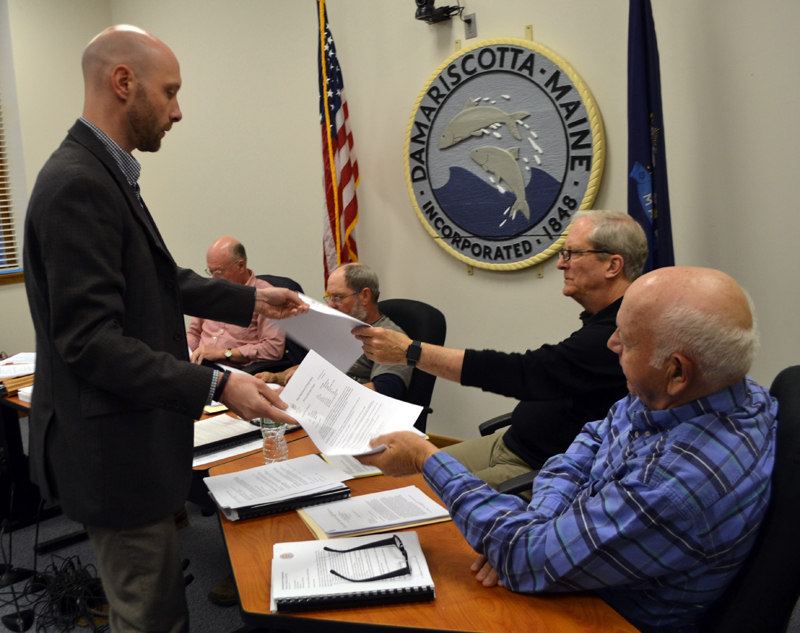 After the town attorney found the board’s first vote on the project to be insufficient, the Damariscotta Planning Board voted again to approve a developer’s proposal to build a Dollar General store and a Sherwin-Williams store at the intersection of Main Street and Biscay Road.

The board voted 4-1 to approve Damariscotta DG LLC’s application during its meeting Monday, May 1. Stephen Cole cast the vote in opposition and said he did not believe the project meets the town’s transportation and access standards for both of its entrances.

During its meeting April 3, the board voted 2-1 to approve the site plan review application with conditions. Bruce Garren and Shari Sage voted in favor of the project and Cole cast the dissenting vote. Chair Jonathan Eaton was absent, and Wilder Hunt, the acting chair of the meeting, did not vote.

Hunt said he did not intentionally abstain from voting on the application April 3; he just forgot to raise his hand to cast his vote. He said that had he voted, he would have voted in favor of the application.

Since the April meeting, the developer has received approval from the Maine Department of Transportation for two driveways, one on Biscay Road and the other on Main Street. The DOT conducted a site review of the property April 25.

The town also received a letter from interim Damariscotta Police Chief Jason Warlick saying he does not see any problems with the development, according to Town Planner Tony Dater.

The developer still must receive a permit from the Maine Department of Environmental Protection for stormwater management and a letter from Damariscotta Fire Chief John Roberts.

In addition, the developer must work with the town to create a sidewalk plan for the property. During previous meetings, both the planning board and the Damariscotta Board of Selectmen expressed a strong interest in the construction of sidewalks as commercial developments move into town.

In addition, Lisciotti Development Corp. will work with the town to determine the cost of the sidewalk and deposit funds in an escrow account for use toward future construction.

The town asked engineering firm Wright-Pierce to provide cost estimates for the proposed sidewalk. In an April 28 response, engineer Travis Pryor estimated the 550-foot sidewalk would cost approximately $32,850. The estimation did not include costs for mobilization, traffic control, and other construction items, Pryor said.

Turner said the developer needs to review the letter and come back to the town with a proposed dollar amount for its donation, with the understanding that a building permit would not be issued until a memorandum of understanding about the sidewalk is drafted and signed.

Steven Hufnagel, of Church Street, asked the board why it waived a requirement in the town’s site plan review ordinance that parking lots be behind or to the side of buildings. Damariscotta DG LLC requested a waiver to place the parking lots at the front of the buildings, facing Main Street.

Eaton, Sage, and Garren each provided reasons for granting the waiver, including the safety of the layout and increased sight lines turning onto both Biscay Road and Main Street.

Bernadette Gerhard, of Chestnut Lane, asked how the planning board thought the community could support a new paint store and dollar store when existing local businesses carry the same products. Similar comments have been made by residents in previous meetings of both the planning board and the board of selectmen.

Eaton said the planning board does not get to choose what types of businesses come into town.

“If 10 people want to move in and set up ice cream shops, as long as they play by the rules in our ordinance, we can’t say no,” Eaton said. “Unless you write an ordinance, and it would be discrimination, there’s no way to prevent it. As long as the people who open these businesses follow the ordinances, you can’t tell them no. You can’t do that.”

After a half-hour of discussion, the board took the vote to approve the application. Dater said he hopes to complete a written notice of decision this month.