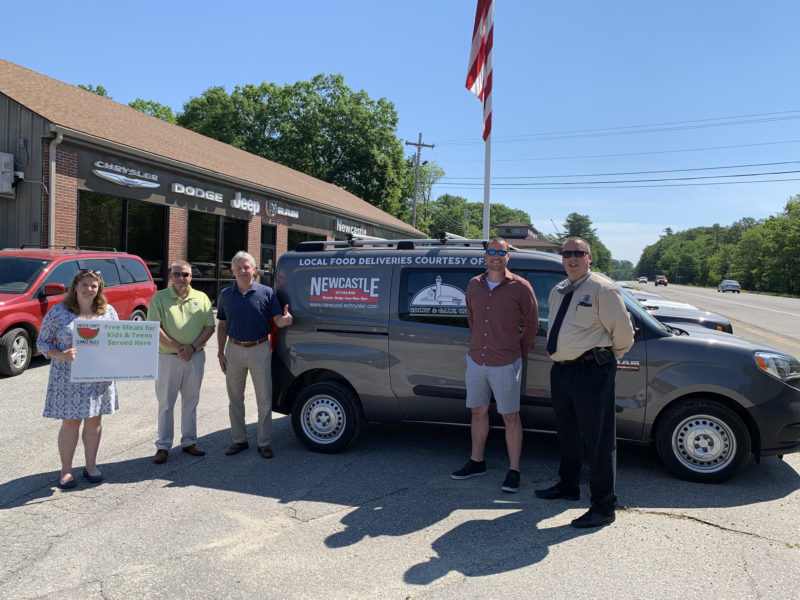 For the past nine years, Lincoln County Summer Meals, a project of Healthy Lincoln County, has provided free meals to children 18 and younger at sites around the community, including the Boothbay Region and Central Lincoln County YMCAs, Jefferson Village School, and Miller School in Waldoboro.

Last year, Healthy Lincoln County expanded its reach with the addition of Lulu the Lunch Wagon, a food trailer the organization used to bring food directly to neighborhoods.

“We work with a lot of partner locations, but we know there are still gaps and kids at home who might not have the transportation to get to a site,” said Kate Martin, director of Healthy Lincoln County. “In the back of my mind, there always was the thought that we need to get the food to where the kids are.”

The organization partnered with the Lincoln County Sheriff’s Office, which transported Lulu to different locations in the area throughout the summer. Martin said Healthy Lincoln County learned a lot from the pilot program, including that there was more that could be done.

“We knew there were other neighborhoods that had this need, and we just needed a way to get there,” Martin said.

Martin spoke with LCSO Chief Deputy Rand Maker, who helped tow Lulu for the program. Recognizing the limitations of only having one trailer, Maker contacted Randy Miller at Newcastle Chrysler Dodge Jeep Ram Viper and Matt Poole at Colby & Gale Inc. to see if they could help expand the program’s fleet.

During the COVID-19 emergency, the businesses had paired up to offer delivery service from local restaurants. Partnering to help Healthy Lincoln County was an expansion of that effort, Poole said.

“In general, the whole food delivery was to help individuals out and the local restaurants we knew were struggling,” Poole said. “When Rand brought the idea up, it didn’t take much convincing.”

“This is just so important, and I can’t imagine young children not getting the nutrition that they need,” Miller said. “Hopefully this makes a difference, which is really what we all should be doing – just getting out there and making a difference any way we can.”

Miller donated the use of a vehicle through the end of August, while Colby & Gale is donating the gas for the vehicle.

“When I got that call that this was going to happen, there were just no words,” Martin said. “This is a program that’s so important, but ends up in the red most of the time, so to have both the vehicle and the gas covered is huge.”

Affectionately known as Bubba the Lunch Box, the cargo van made its debut July 7 and served 56 meals. Bubba can be found on Tuesdays and Thursdays at Maplewood Mobile Home Park and Sheepscot Bay Apartments in Wiscasset and at Ledgewood Court in Damariscotta. Children do not need to live in those locations to receive the meals, nor do they need to provide any information to the organization, Martin said.

During each visit, children receive two days worth of breakfast and lunch meals, which usually consist of a fruit, vegetable, and protein. Previous meals have included salads, yogurt parfaits, and turkey wraps.

With the COVID-19 emergency ongoing, Martin said the program has helped families stretch their budgets further.

“Especially now, families might be finding themselves in situations they might not have been before and need to budget a plan more than they have,” Martin said. “If we can help, we’re glad to do it.”

For more information, including the full list of summer meal locations and Lulu and Bubba’s neighborhood stops, find Lincoln County Summer Meals on Facebook or call 563-1330.