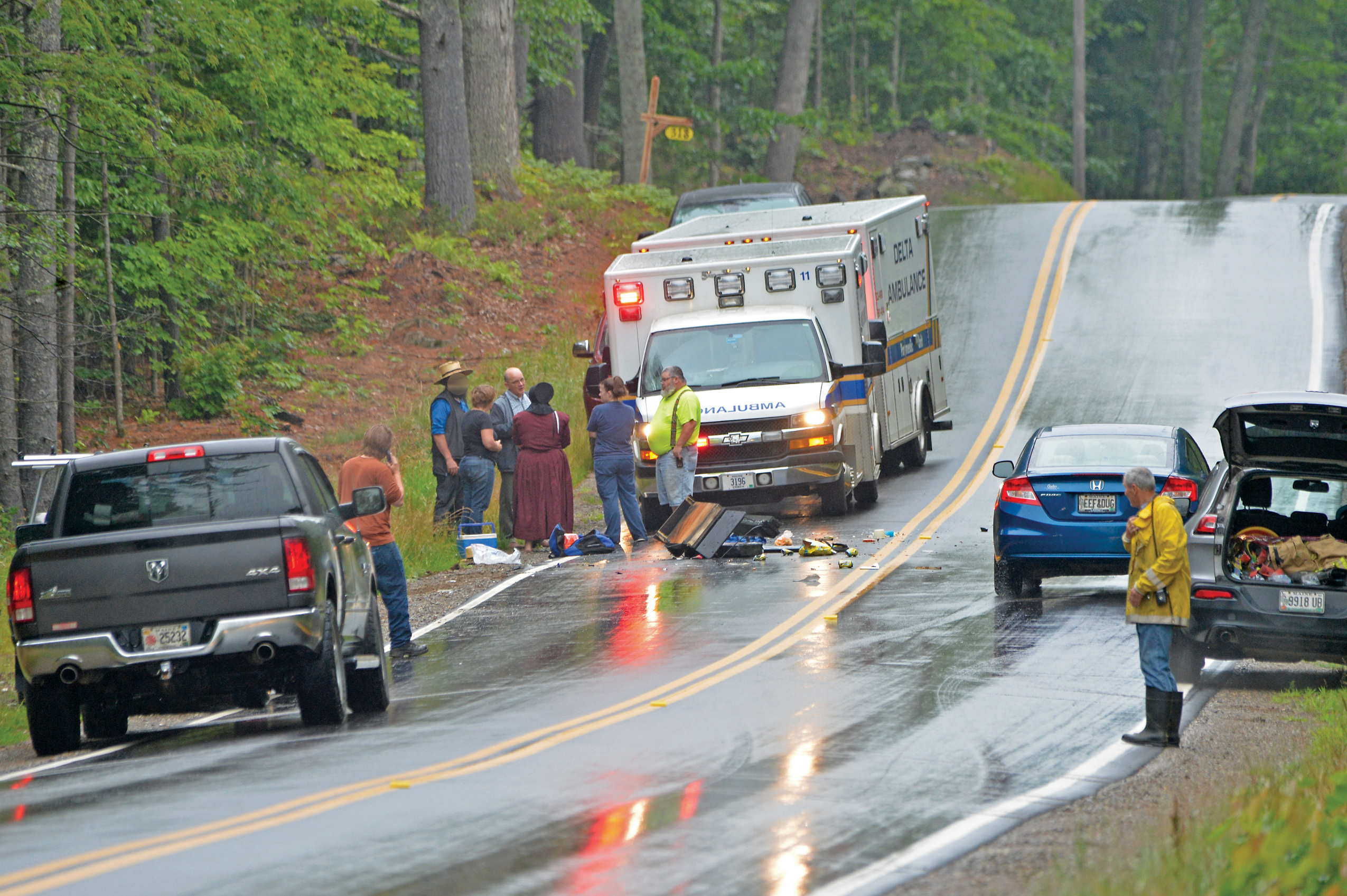 Emergency personnel work on the scene of a crash involving a horse-and-buggy in Whitefield on July 9. (Paula Roberts photo, LCN file)

Lincoln County Sheriff Todd Brackett met with Whitefield’s Board of Selectmen on Tuesday Aug. 17, to brainstorm methods to address an uptick in car and buggy crashes in Whitefield and surrounding towns.

Brackett told selectmen that while Whitefield has seen an increase in buggy crashes in July and August compared to years past, he said that there wasn’t necessarily a cause for alarm given the rising volume of traffic in general.

However, the sheriff added that buggy-related crashes have increased in frequency just in the prior four weeks, and that complaints have increased, as well.

Bracket also said that there has only been one case so far in which the buggy had contributed to the cause of the crash; a horse did not come to a stop at a stop sign when it was told to.

Select Chair Lester Sheaffer noted that Whitefield already has a number of road signs around town alerting motorists of buggies in the road, including the town’s “Welcome to Whitefield” sign, which features the silhouette of a horse and buggy, along with a dog walker and a cyclist, with the phrase “We share our roads” emblazoned beneath it.

Many of Whitefield’s Amish community members have also affixed reflective tape to their black buggies to make them more visible at night.

However, Whitefield road’s committee chair Frank Ober noted that visibility hasn’t seemed to be as much of an issue as all of the crashes this summer have taken place during the day time.

“The problem is that the people are blaming the buggies … instead of the other motorists or themselves,” Lt. Brendan Kane said at the meeting.

Brackett said that he spoke with David Allen, Midcoast region traffic engineer for the Department of Transportation, regarding the clever slogans that DOT will display on their road signs, such as “Santa sees you when you’re speeding” around Christmas time.

Brackett asked Allen if his team could come up with some similar slogans to warn motorists about horse and buggies. The engineer came back with a list for the sheriff’s office to try out on their signs.

“Don’t scare the mare, watch for buggies” was a crowd favorite at the meeting.

Brackett said he wants to make community awareness a priority, and proposed a month-long campaign in collaboration with DOT, placing digital signs around town.

At the same time, the sheriff said he might like to see the town and municipal officials reach a wider audience by sharing information about driving in a community with Amish residents on social media and the town website.

“I just wanted to toss around ideas, keep the conversation going, and see if there’s something we can do collectively as a community to try and just heighten awareness and see if that will help us increase safety a little bit,” Brackett said.

Having spoken to Mose Yoder and Henry Miller, two members of the Whitefield’s Amish community, recently regarding the spate of crashes, Whitefield resident Chuck Vaughan said that while there are some points upon which the town’s Amish residents simply will not compromise, they are doing their best to be “good citizens.”

Miller wrote a letter for Vaughan to read at the meeting in which he thanked the selectmen, DOT, and the sheriff’s office for their ongoing efforts.

“We all want to do our part on the road and also want to thank everyone that comes up behind us for their patience and support,” Vaughan said, reading from the letter.

In other news, the selectmen opened six closed bids from contractors to replace the collapsed Leonard’s Bridge culvert on South Hunts Meadow Road. Bids ranged from $165,000 at the lowest to $549,000 at the highest.

Selectmen agreed that efficiency would be a priority in selecting a contractor. Of the six, McGee Construction offered the earliest completion estimation of October, but multiple contractors also estimated anytime from October to November.

The town’s Roads Committee will be sending the recommendation for a contractor to selectmen by Aug. 31.

Whitefield will eventually have to hold a special town meeting to approve funding for the project, as the town only has about $80,000 set aside for it, according to Selectman Keith Sanborn.

After an executive session to discuss a possible buyer for the tax-acquired property at 30 Beech Lane, selectmen unanimously voted to approve the sale of the property and will provide more information regarding price and the buyer after it is confirmed.

Vice Chair Charlene Donahue was not in attendance for Tuesday’s meeting.

The Board of Selectmen will next meet at 6 p.m. Tuesday, Aug. 31, at the Whitefield Fire Station.