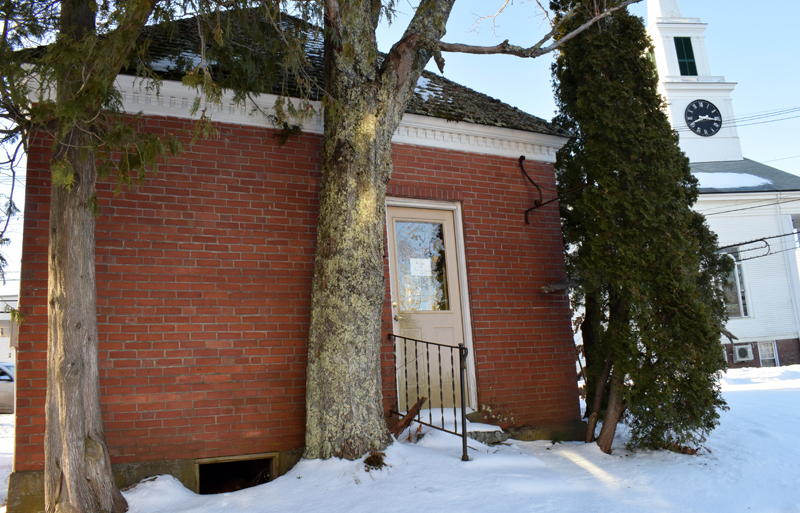 The Damariscotta Region Information Bureau building from Vine Street on Wednesday, Dec. 23. The Maine Department of Transportation recently approved the sale of the land the building sits on to the town of Damariscotta. (Evan Houk photo)

The Maine Department of Transportation has approved the sale of King Square — the parcel of land between Main and Vine streets home to the Damariscotta Region Information Bureau building — to the town of Damariscotta.

“It’s one step into getting the future of that building secured,” Lutkus said at the Damariscotta selectmen’s meeting Wednesday, Dec. 16. He said he does not have a price yet, but hopes it will be reasonable.

Chamber President John Roberts said the plans for the building will go before the planning board again for final approval, possibly in February, before construction can begin.

Lutkus said the only condition from the DOT is that there be an entrance on Main Street and an exit onto Vine Street, to avoid vehicles having to back out onto Main Street.

This entrance-and-exit driveway is already part of the chamber’s plan for the property, which also includes renovating and adding onto the 1935 building. At present, the property only has a parking lot on Main Street, with no exit onto Vine.

Also on Dec. 16, the selectmen accepted the resignation of Elizabeth Printy, an alternate to the Damariscotta Planning Board. Printy is selling her house in Damariscotta and moving out of town.

Lutkus asks anyone interested in the position to email mlutkus@damariscottame.com or call the town office at 563-5168.

“In some cases, the current ordinance and the code that relates to permits really don’t allow us to get as involved as I think we should be as a town,” Lutkus said.

He said that, for example, there has been a building under construction since 2016 in the village area that is somewhat of an “eyesore.” He said that building falls under a maintenance exception in the ordinance.

Lutkus said he and Waltz would like to see the ordinance modified to require a permit and a follow-up inspection for any major exterior or interior work that currently falls under an exception for routine maintenance.

Lutkus said after the meeting that voters overwhelmingly approved the property maintenance ordinance at annual town meeting in 2013.

If the selectmen approve proposed amendments to the ordinance, they could go to a vote at annual town meeting in 2021.

Lutkus told the selectmen that Hagar Enterprises Inc. has completed its work on the Bristol Road sidewalk project for the year, after the installation of a temporary driveway entrance to the Damariscotta Baptist Church to allow for compliance with the federal Americans with Disabilities Act.

Lutkus said Hagar Enterprises will complete a more permanent entrance to the church next spring.

As part of the project, the town also hopes to install a flashing pedestrian light for the crosswalk at the intersection of Bristol Road and Miles Street, the entrance to LincolnHealth’s Miles Campus. He said the light is a high priority for the Damariscotta Region Public Safety and Accessibility Collaborative, as well as for other residents.

“Motorists are going fairly quick through that intersection,” Lutkus said.

Lutkus said there is a $23,000 quote to install the light and the state is willing to cover its share of the cost. The town only has to ensure it has enough funds left in the project budget.

Lutkus told the selectmen that the town’s solar array, which went online in June, produced more energy than the town used in November, the first month it had done so, resulting in a net energy credit with Central Maine Power Co.

“It’s more than covering our electrical needs for town facilities. And when the restroom finally comes online, that will be included as well,” Lutkus said. A contractor is building public restrooms in the municipal parking lot.

Lutkus said that CMP has added the town’s traffic lights to its account. Streetlights cannot be added because they are not metered.