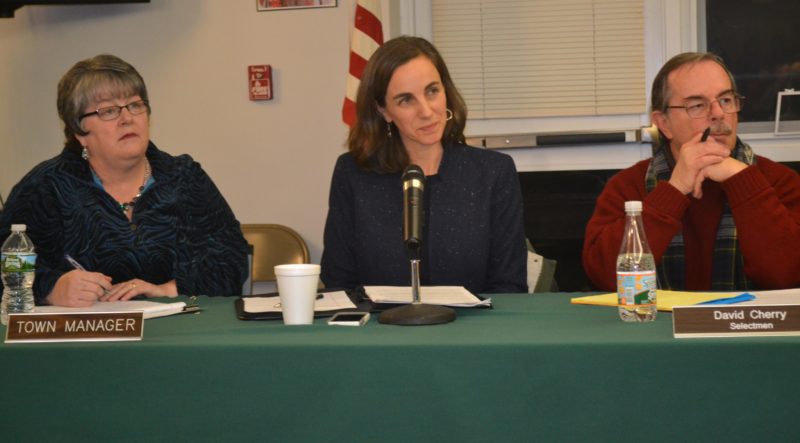 From left: Wiscasset Town Manager Marian Anderson, town attorney Shana Mueller, and Selectman David Cherry listen to public comment about the Maine Department of Transportation dowtown traffic project during a meeting of the Wiscasset Board of Selectmen at the Wiscasset Community Center on Tuesday, Nov. 1. (Abigail Adams photo) 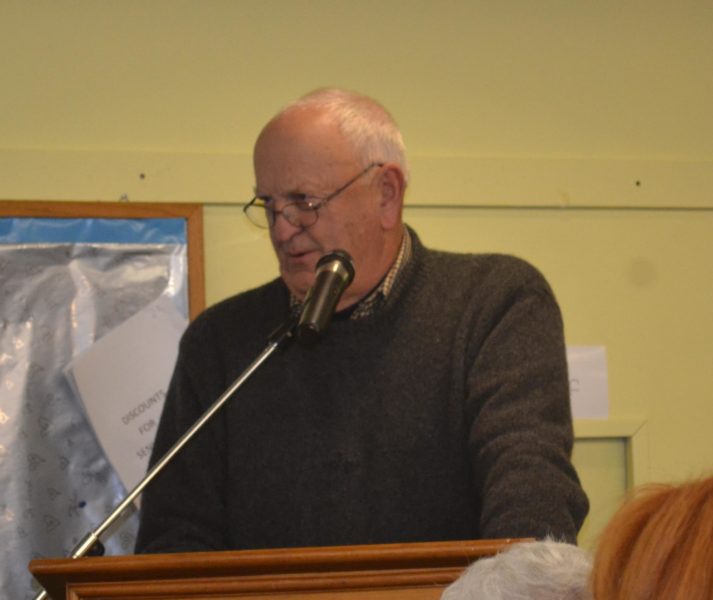 The Maine Department of Transportation is asking the town of Wiscasset to sign a letter of intent instead of a more formal contract regarding the town’s future maintenance responsibilities in connection with the DOT’s downtown improvement project.

The letter of intent reviews the project and its history, describes the DOT’s public process, and asks the town manager, on the authority of the selectmen, to sign to indicate “acknowledgement of this letter, its contents, and the process going forward as described herein.”

The Wiscasset Board of Selectmen tabled a decision on authorizing Town Manager Marian Anderson to sign the letter after an extended public-comment session and a presentation from town attorney Shana Mueller at the board’s Tuesday, Nov. 1 meeting.

A decision on the letter and a process to select a town advisory committee to hammer out the details of the project with the DOT will be made at the selectmen’s Nov. 15 meeting, Chair Judy Colby said.

“It was not the right stage of the project to enter into a cooperative agreement” or legal contract with the DOT, Mueller said to the standing-room-only crowd at the Wiscasset Community Center.

The Tuesday meeting was the third time the cooperative agreement had appeared on the Wiscasset Board of Selectmen’s agenda; each time members of the public expressed their opposition to the contract, which would legally bind the town to the DOT project.

Upon legal review and revision of the cooperative agreement, it became clear that it was too early in the design phase to provide hard numbers for future maintenance costs of the project, Mueller said at the meeting, which was solely devoted to discussion of the agreement.

The legal agreement and the future financial responsibility of Wiscasset will not be ready for discussion until the design phase of the project is approaching completion, which could be about eight months away, Mueller said.

Prior to requesting bids for the project’s construction, the DOT will ask the town to sign the agreement outlining the financial responsibilities of Wiscasset for additional work requested by the town and future maintenance costs, according to the letter.

The terms of the agreement for future maintenance costs are open for negotiation; while it is the policy of the DOT to transfer maintenance costs for items such as stoplights to the town, it is not a law, and therefore it is negotiable, Mueller said.

The DOT’s downtown traffic project, which was overwhelmingly approved by residents in a non-binding referendum question in June, includes installing two traffic lights in Wiscasset village, creating a new parking lot and parking areas, and extending sidewalks with the option for amenities such as benches, cafe tables, and landscaping.

The future maintenance costs to the town have recently become a focus of opposition to the project, with the newly formed Wiscasset Taxpayers Alliance questioning the project’s impact on future tax bills. Wiscasset property taxes went up 14.1 percent this year.

The elimination of on-street parking between the intersections of Route 1 with Middle Street and Water Street; the impact on the historical integrity of Wiscasset village, which is a historic district on the National Register of Historic Places; and future maintenance costs are the chief reasons project opponents are calling on selectmen to abandon the project and not sign the agreement.

Many residents expressed suspicion that the DOT’s decision not to use federal funds for the downtown project was made to avoid the need to comply with federal historic and environmental impact standards. The DOT planned on using Federal Highway Administration funds for the project when it was first presented to the public in March.

However, the DOT opted to rely solely on state funds for the estimated $4 million to $5 million project in September in an effort to expedite the project, which is a high priority for the DOT, DOT Project Manager Ernie Martin has said.

Wiscasset Taxpayers Alliance spokesperson Bill Sutter urged selectmen to reconsider the vote and stop the project, partly due to the change in funding since the June vote.

His comments were soon followed by a resident who urged selectmen to respect the decision voters made in June and move forward with the DOT project.

About 20 Wiscasset and area residents spoke at the meeting both in opposition to and in support of the DOT project. Comments both for and against the project were met with applause from the audience.

When claims were made that voters did not understand what they were voting on and were uninformed about future financial obligations, statements of “I did” and “I knew” could be heard in the audience.

The sidewalks and stairs on Main Street, which would be rebuilt as part of the DOT project, are in disrepair, downtown business owner Brad Sevaldson said. If the town walks away from the DOT project, the town will eventually need to fund the rehabilitation of the downtown sidewalks on its own, he said.

The Alna Board of Selectmen voted unanimously at a recent meeting to support the DOT project because Alna serves as a de facto bypass around summer traffic congestion in Wiscasset, Alna Third Selectman Doug Baston said.

Throughout the process, several residents have questioned when and if Wiscasset would be able to walk away from the project. With Route 1 a state highway, the DOT has a lot of power over the project and may have the legal authority to move forward with elements of the project without town approval, Mueller said.

In the letter of intent, the DOT said it would work closely with a town-appointed advisory committee and host a series of public meetings and informational sessions before finalizing the project design.

Residents questioned why the town has taken so long to form the committee to work with the DOT to address many of the concerns raised by the public, which the DOT encouraged the town to do about three months ago.