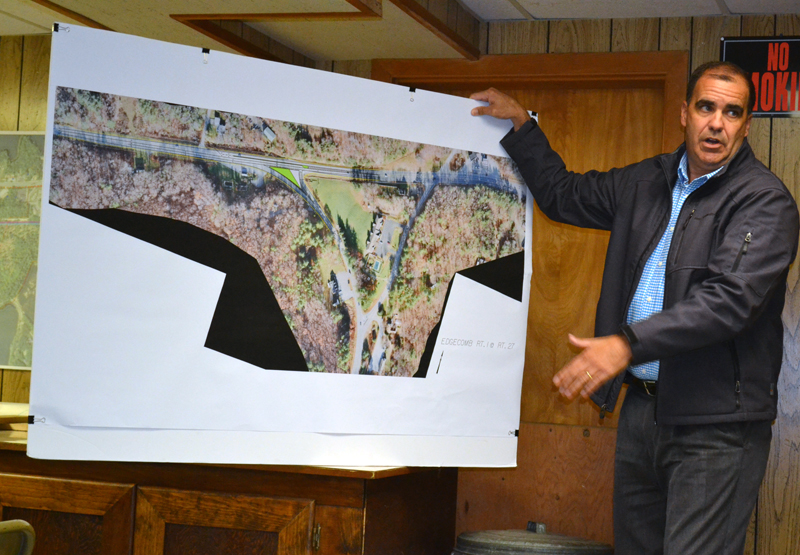 Maine Department of Transportation Project Manager Ernie Martin explains the department’s plan to build a “Florida T” intersection at Route 1 and Route 27 in Edgecomb during a meeting of the Edgecomb Board of Selectmen on Monday, June 5. (Abigail Adams photo)

Route 1 and Route 27 in Edgecomb could become a “Florida T” intersection. The Maine Department of Transportation is in the preliminary engineering phase of a redesign of the intersection. DOT Project Manager Ernie Martin attended the Edgecomb Board of Selectmen’s Monday, June 5 meeting to walk the public through the department’s plans.

The plans for the intersection will be presented to the community during a public hearing in late July or August, Martin said. The DOT intends to secure funding for the project in its next work plan with construction projected to begin in 2019.

The intersection is a top safety priority for the DOT due to crash statistics, which are far above average, Martin said. With the relatively low cost of a Florida T intersection design, Martin does not foresee an issue with securing funding and carrying out the project.

The design is “a much friendlier merger” for turning traffic and eliminates the need to check both the northbound and southbound lanes of Route 1, Martin said.

The majority of accidents at the intersection are rear-end accidents caused by a back-up of motorists on Route 27, Martin said. Turning traffic must check both lanes of Route 1, causing vehicles to start and stop suddenly when trying to pull out. Rear-end accidents often result, he said.

While the new intersection would reduce the frequency of rear-end accidents, there is a risk that the severity of accidents could go up if southbound traffic “feels it can move faster,” Martin said.

Edgecomb Fire Chief Roy Potter asked about lowering the speed limit in the area. Potter also questioned how emergency vehicles would be able to navigate the new intersection with the island and a protected merger lane.

“I have a bad feeling this is going to create high-impact crashes,” Potter said, urging the DOT to consider the speed limit when moving forward with the project.

The intersection of Route 1 and Cross Road, which connects to Route 27, will not change, Martin said. It will be the last opportunity for southbound traffic to turn onto Route 27 before crossing the bridge to Davis Island, he said.

Selectmen asked if the DOT could install a light at Cross Road, which currently has no lighting and is difficult for motorists to find, they said.

The DOT will take the request into consideration as the project moves forward, Martin said.

It is important for residents to ask questions and become involved in the DOT’s plans for the intersection, Edgecomb Board of Selectmen Chair Jack Sarmanian said. “The project doesn’t just affect our community, it’s in our community,” he said.