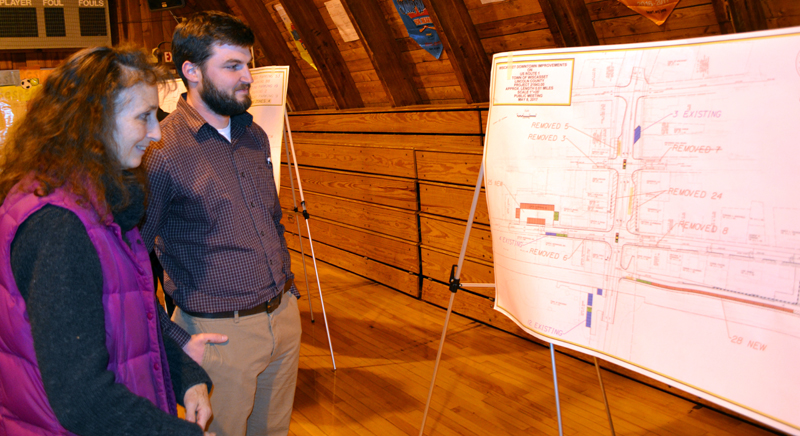 Wiscasset resident Susan Robson reviews a diagram of the parking proposal for the Wiscasset downtown traffic project with Steve Bates, of VHB, during a public hearing Monday, May 8. (Abigail Adams photo)

More than 150 people turned out to hear the Maine Department of Transportation’s parking proposal, part of the downtown traffic project, on Monday, May 8, with over a dozen speakers weighing in on the plan.

Audience members applauded comments both in support of and against the project. The DOT’s plan to demolish the Haggett Garage, which the DOT acquired through eminent domain, was at the forefront of comments in opposition to the parking proposal.

The plan includes four loading zones for dropping off and picking up passengers and making deliveries to Main Street businesses, as well as nine handicapped parking spaces on side streets, in response to concerns expressed about the removal of on-street parking.

The new plan eliminates five additional parking spaces in front of the Golden Wok restaurant to make room for one of the loading zones. Loading zones will also be placed on the southbound side of Route 1 on Main Street and on Railway Avenue.

For the past several months, the DOT and a consulting firm, VHB, have worked with Wiscasset’s Public Advisory Committee to hammer out the details of the parking proposal.

The work of the public advisory committee will continue as feedback from the public hearing is taken into consideration and the DOT moves forward with other elements of the project, said DOT Project Manager Ernie Martin.

Former Coastal Enterprises Inc. President Ron Phillips attended to speak out against demolishing the Haggett Garage and displacing its current tenant, Midcoast Conservancy. CEI was the owner of the building before its acquisition by the DOT.

Phillips questioned whether Wiscasset wanted to lose a “small-business enterprise with stewardship responsibilities” that creates “economic value year-round” in exchange for 25 parking spaces. He said the building has historical value tied to the Ford Model T revolution in the automobile industry.

Phillips asked if the DOT decided not to seek federal funds for the traffic project in an effort to circumvent federal historical preservation regulations – a common accusation from project opponents. Phillips and several others are reaching out to the Maine Legislature in hopes of gaining support for their efforts to block the demolition of the Haggett Garage, he said.

Resident Anne Leslie said Wiscasset would lose “its pride in place” if it loses the Haggett Garage, which was built in 1916. The historic village is part of the reason people come to the town, Leslie said. Another resident expressed concern about removing the building from the tax rolls.

While Phillips’ comments received a loud round of applause, not all in attendance shared the same sentiment about the Haggett Garage. “It’s a terrible building,” said Robert Faunce, county planner with Lincoln County Regional Planning Commission.

Faunce’s office was previously in the CEI building across the street, and he attended several meetings in the space where he said sound echoed throughout the office. “There’s a reason there’s a nonprofit there and not a business,” Faunce said. “No business would go in there.”

The Lincoln County Regional Planning Commission Board of Directors recently wrote a letter in support of the downtown traffic project, Faunce said. The traffic bottleneck in Wiscasset is adversely affecting the surrounding communities and is a roadblock to economic development on Lincoln County’s peninsulas, Faunce said.

“We can’t dead-end this project,” Faunce said. “It has to go through.” 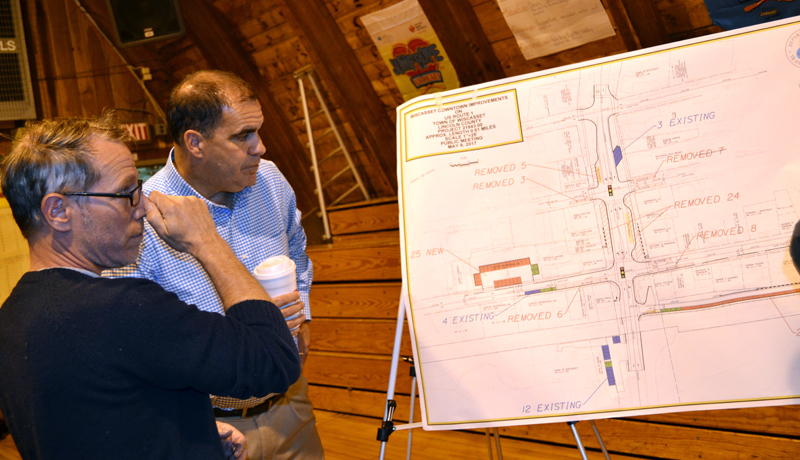 Resident Judy Flanagan said Midcoast Conservancy is not a business, but a nonprofit, which is eligible for tax-exempt status. Flanagan, downtown business owner Brad Sevaldson, and several other residents are forming a coalition of residents in support of the DOT project.

The group is loosely calling itself Citizens of Progress and Safety and only recently began to meet.

“We really just want to get the word out that there are a lot of us that support this project,” Sevaldson said. “A lot of us are thinking about progress and how to attract new businesses and new residents to town.”

The project would improve safety in the Wiscasset village, which currently has sidewalks that do not accommodate wheelchairs or strollers, resident Susan Robson said.

“It’s going to bring a lot of change, but it’s change that needs to happen,” Robson said. “This will only make Wiscasset more attractive, more user-friendly, and safer.”

Residents asked questions about bicycle lanes and noise and light pollution from the traffic lights planned for downtown. Wiscasset Taxpayer Alliance spokesman Bill Sutter questioned whether the Legislature would approve the project’s $5 million price tag, and said he has gone to Augusta to lobby against the project.

Some residents continued to speak in favor of a bypass around the village, which also received a round of applause.

“You’re the reason we have these meetings,” Martin said to her. “I didn’t know that until you told me. Thank you.”

While the removal of on-street parking is definite, the location of the handicapped parking spots in the surrounding area is still subject to change, Martin said. DOT’s next steps will involve working with the public advisory committee to finalize the parking proposal and hammer out the details of landscaping and sidewalk amenities, such as benches, he said.

Martin has been informed that the project is fully funded, and will act accordingly until he hears otherwise, he said. In response to the continued questions about the DOT not seeking federal funds, “that question was answered by the commissioner,” Martin said.

Maine Transportation Commissioner David Bernhardt previously said the DOT would not pursue federal funds in order to expedite the project.