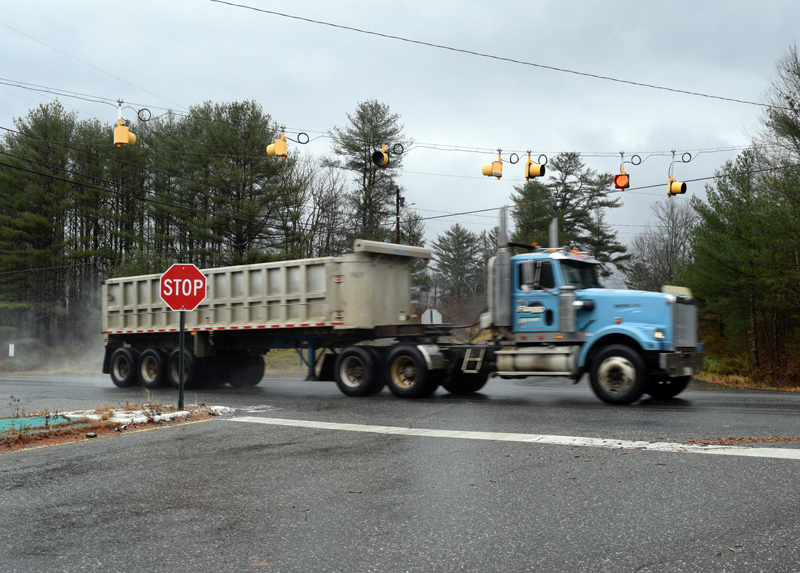 A tractor trailer traveling on U.S. Route 1 passes the intersection with Belvedere Road in Damariscotta, where the Department of Transportation intends to install a $3.1 million roundabout in 2024. (Nate Poole photo)

Damariscotta will likely see a $3.1 million roundabout at the intersection of Belvedere Road and U.S. Route 1 in 2024.

Dennis Emidy and Jeff Pulver from the Maine Department of Transportation’s Safety Office presented the preliminary processes and plans for the project to the Damariscotta Board of Selectmen on Nov. 17.

The intersection is one of the most dangerous rural intersections in Maine and has been a longstanding issue in Damariscotta.

“The number and severity of accidents at this intersection have been a major concern for decades,” Town Manager Matt Lutkus said in his notes on the meeting’s agenda.

Emidy told the selectmen that DOT is prioritizing the intersection in its plan for the next three years because the department has identified it as a “high crash location,” meaning that the location has seen eight or more crashes in a three-year period and an abnormal rate of crashes with critical injuries.

He said that the percent of collisions with injuries at rural intersections in Maine typically hover around 36%. At the Belvedere Road intersection, 63% of crashes caused injuries from 2016 to 2020.

In that same 5-year period, there were a total of 19 crashes, one of them fatal. From 2009 to 2020 there were 29 crashes. There have been three crashes at the intersection in 2021, according to Emidy and Pulver.

Emidy said that the most severe crashes at the Belvedere intersection occur when vehicles turn left out of Belvedere Road onto Route 1 or drive straight across Route 1. A collision is often caused when a vehicle on Route 1 pulls into the breakdown lane to allow vehicles behind it to pass as it turns onto Belvedere, obstructing the view of those pulling out of Belvedere.

Pulver walked the selectmen through a variety of options the department looked at, and explained that a roundabout would be the most cost-efficient, safest option that would impede the flow of traffic the least.

The department also looked at installing a traffic signal at the roundabout, and Pulver said that while that option would be more cost efficient, it would be significantly less safe as there would still be potential for high-speed angle crashes.

Pulver said that, of the 27 roundabouts in Maine that have been installed since 1998, locations have seen decreases of 48% in total crashes, nearly 70% in injury crashes, and 70% in crash costs.

The roundabout will be approximately 150 feet in diameter, the largest size of single-lane roundabout that the department installs. Pulver said that once vehicles enter the roundabout, they should not be able to traverse it at a speed greater than 20 mph. He said that the speed limit immediately ahead of the roundabout would likely drop to 45 mph, possibly 35 mph. 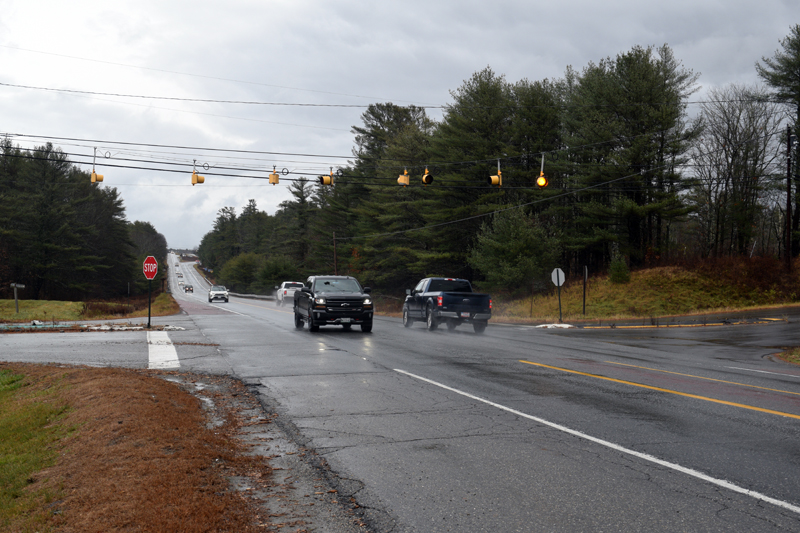 The intersection of Belvedere Road and U.S. Route 1 in Damariscotta is one of the most dangerous rural intersections in Maine. The Department of Transportation is planning to alleviate that danger with a $3.1 million roundabout in 2024. (Nate Poole photo)

Before jumping to a major project solution, DOT installed overhead flashing beacons, seasonal delineator posts along the centerline on Route 1, and stamped pavement in the breakdown lane to discourage drivers from pulling into it to turn. However, none of those mitigation techniques had a significant positive impact on collisions.

Board Chair Daryl Frasier asked what kinds of traffic impacts that project would see, as traffic speeds would reduce significantly, if only briefly.

Pulver said that DOT’s models projected that even if the rate of traffic grows 20% following the installation of the project, queues at the roundabout would only extend about 2 to 4 cars back.

Frasier also asked if DOT planned to make any additional collision mitigating changes to the intersection between now and 2024, such as reducing the speed limit.

Pulver said that reducing the speed limit does not impact actual speeds of travelers, and can create more collisions as some vehicles abide by the reduced speed limit and others do not, according to DOT studies.

Otherwise, DOT plans to reduce the height of the centerline delineator posts on Route 1 and paint a crosshatched pattern over the breakdown lane to further discourage vehicles from using it to turn.

“I would love to do something to get people to drive 45 mph through there. Unfortunately, I don’t think a 45 mph sign would do that,” Pulver said.

Selectman Josh Pinkham asked Pulver and Emidy where the fire department and other first responders should park vehicles along or inside the roundabout and continue to direct traffic in the event of an accident.

Emidy said that he was not sure and would do some research into how first responders have dealt with roundabouts in and outside of the state and bring that information back to the selectmen.

There would, however, be a gap in the island enabling vehicles traveling south on Business 1 to turn left onto School Street.

Pulver said that, of the potential alternatives, the island had the best chance of meeting benefit to cost requirements.

If a project does not meet certain benefit to cost criteria, then the municipality, the tax-payers, would have to contribute a “sizeable amount,” according to Lutkus.

Emidy and Pulver said that the project could potentially be completed in 2025. Emidy said that he would like a letter of support for the project from the town before proposing it.

In other news, the board of selectmen approved Wright-Pierce’s 60% design plan for Damariscotta’s $4.2 million-plus waterfront improvement project. The firm will now proceed with creating a 95% plan.

The Damariscotta Board of Selectmen will next meet at 5:30 p.m. Wednesday, Nov. 17, at the Damariscotta Town Office. A livestream and recording of the meeting will be available on LCTV.