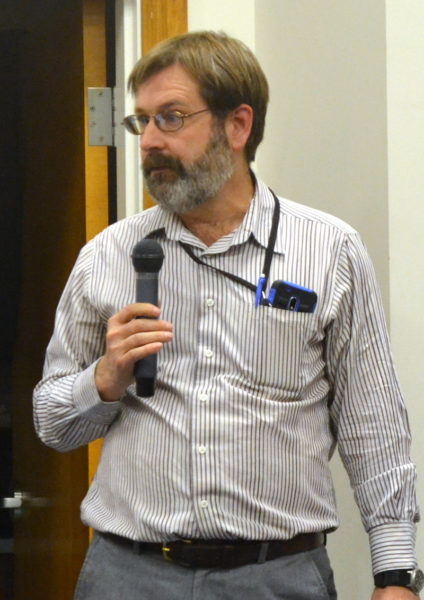 Maine Department of Transportation Region 2 Traffic Engineer David Allen presented the department’s findings from a review of Bristol Road speed limits during the Wednesday, Feb. 15 meeting of the Damariscotta Board of Selectmen.

During radar studies in July and November, the DOT measured the speed of 100 vehicles on a day of typical traffic flow to determine the speed at which 85 percent of drivers travel the road.

The DOT also considered a number of characteristics of the road, including the number of driveways, businesses, and intersections, as well as accident data for the past three years.

Based on the data collected, the DOT found the speed limits to be appropriate, with the exception of the stretch from Pine Ridge Road to the Down Easter Inn, where it says the limit should be reduced from 40 mph to 35 mph.

In addition to Allen’s presentation, Sgt. Jason Warlick, of the Damariscotta Police Department, presented data the department has collected from Bristol Road using a digital sign. The sign allows the department to track the speed of vehicles, as well as the time of day traffic moves the fastest.

According to data the department collected from October 2016 through the end of January, 130,865 cars entered Damariscotta via Bristol Road. The average speed of vehicles entering the 40-mph zone near the Bristol-Damariscotta town line was 38.44 mph, Warlick said.

Speeds as high as 63 and 73 mph were recorded, but Warlick said the sign does not recognize whether those were emergency responders.

Damariscotta Board of Selectmen Chairman Robin Mayer asked if improvements to Bristol Road, including paving the road and filling in potholes, could give drivers a “visual cue” to go faster.

Allen said other factors, such as sidewalks, could slow drivers down. A public hearing regarding the construction of a sidewalk on Bristol Road had been held earlier in the evening.

Jean Moon and Bob Piper, Bristol Road residents and members of the Bristol Road Community Association Steering Committee, asked Allen to consider other pieces of data besides the 85 percent rule.

The Bristol Road Community Association is a coalition of Bristol Road residents and neighbors. In December 2015, the association submitted a petition to the selectmen with 621 signatures of people who would like to see the road’s speed limits lowered.

Norma Piper, of Bristol Road, asked Allen why the DOT had not considered extending the 25-mph zone to Miles Street due to the presence of LincolnHealth’s Miles Campus.

Shari Sage, of Bristol Road, said she would also like to see the 25-mph zone extended.

Allen said that portion of the road was not reviewed, as it was not included in the town’s request for a review.

In his Jan. 21, 2016 letter requesting the review, Town Manager Matt Lutkus asked for the DOT to “review the posted speed limit on the southern section of Bristol Road from Miles Road (Day’s Cove) in Damariscotta to the Damariscotta-Bristol town line.”

“There was a misunderstanding on how far north we wanted him to assess,” Lutkus said.

Allen said he would return to complete a review of an additional portion of the road if the town requested it. Lutkus contacted Allen the following day and asked him to review the speed limits from Day’s Cove, where the speed limit changes from 25 to 35 mph, to Miles Street.

The town, including the Damariscotta Police Department, will work with the DOT to provide data, Lutkus said.