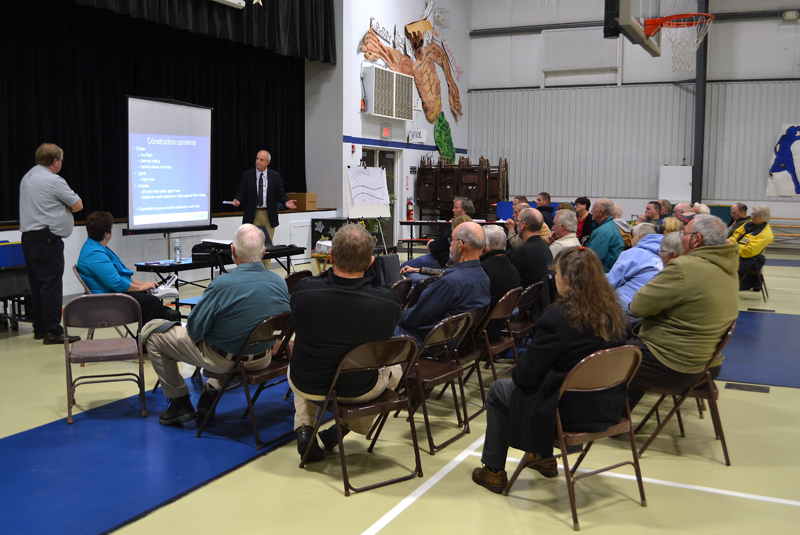 South Bristol residents listen to a presentation by representatives of the Maine Department of Transportation at South Bristol School on Wednesday, Dec. 7. (Maia Zewert photo)

The Maine Department of Transportation presented its plans to remove ledge under one side of the new bridge over The Gut during a meeting at South Bristol School on Wednesday, Dec. 6.

The purpose of the meeting was to inform residents about the upcoming work, as well as answer questions and receive comments from the community, according to DOT Senior Project Manager Michael Wight.

After the DOT completed its $11 million replacement of the swing bridge with a bascule-style drawbridge in May 2016, the department received complaints about some boats having trouble going through the channel at low tide due to the ledge, Wight said.

Wight spoke with South Bristol Harbor Master Cecil Burnham and the U.S. Army Corps of Engineers, the agency responsible for regulating the channel, about the issue and determined that some of the ledge and fill under the south abutment needed to be removed.

There is also some ledge and other materials on both the east and west sides of the bridge that will need to be removed as part of the project, Wight said.

“By removing all this material here, that 20-foot channel, with possibly a little bit extra, will be wide open and drastically reduce the concerns when you go through at low tide,” Wight said.

A preliminary design report for the project is projected for completion by Jan. 3, with a public meeting to discuss the report with residents planned for sometime in February. The DOT would advertise the project in December 2018 and award a contract for the work in January 2019.

If all goes according to schedule, Wight said construction could begin in early February 2019 and conclude the following month.

“Hopefully we can speed this up, because we’ve done a lot of the permitting work before, so maybe if we can get this going, it could happen sooner,” Wight said.

Wight said there are some practical concerns about how the ledge would be removed, which would ultimately be up to the contractor chosen for the project. Possible methods of removal include using hydro-demolition, which would use high water pressure; or grinding the ledge.

Work would be conducted between 10 p.m. and 4 a.m. Monday-Friday, Wight said. Motorists attempting to cross the bridge could experience delays of up to 20 minutes during that time. The channel would be closed to boat traffic for 28 days.

The estimated cost of the project is $280,000. All funds will come from federal and state sources, Wight said.

When Wight opened the meeting for questions, a few residents expressed concern about the project’s impact on emergency services.

Jennifer Oliver-Gutgsell asked if the process would delay first responders on Rutherford Island from going to an emergency on the mainland.

“I understand that you’ll call and let them know, but it’s still a little scary when you have a life-threatening situation,” Oliver-Gutgsell said.

Responding to Oliver-Gutgsell and later to other members of the audience with similar questions and comments, Wight said the department hopes to minimize any delay.

“If things are coordinated very well, hopefully it’s not much of a delay,” Wight said.

John Seiders asked why it had taken the DOT so long to address the ledge issue.

“You knew this was in the channel, so why has it taken the fight from the harbor master for you to come down and finish the job?” Seiders said.

Wight said there were a variety of reasons why the ledge removal did not take place during the construction of the new bridge, including time constraints.

“The contractor had a very tight window to get it done, because we had to have it open in the spring,” Wight said. “Basically we ran out of time.”

Some of the ledge slated for removal was also out of the permitted work area the DOT was operating in at the time, Wight said.

Burnham asked Wight if the DOT could do something to reduce the blind spot for boaters traveling under the bridge. He said he had heard about four different near-collisions and suggested that the DOT install either lights or mirrors so boaters could see a boat approaching on the other side of the bridge.

“That’s certainly something we could talk about,” Wight said.

The DOT will keep the town and its residents updated as the project progresses, Wight said.