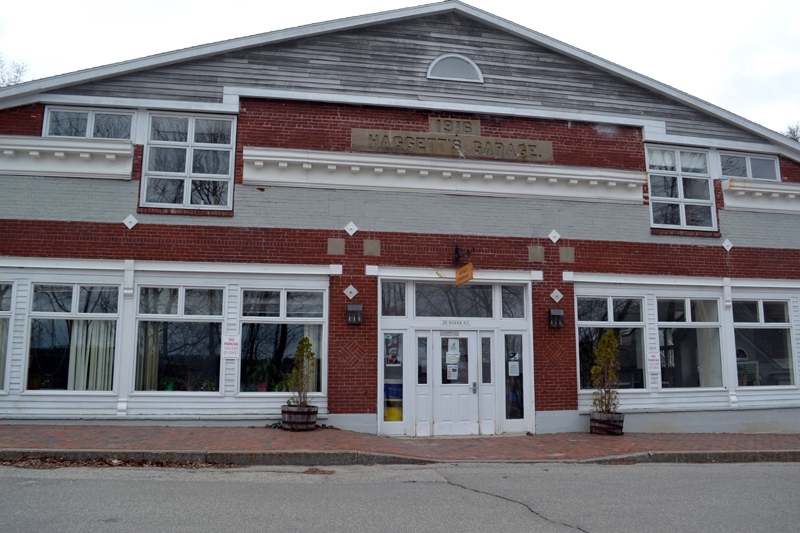 The Maine Department of Transportation has taken ownership of the Haggett Garage building on Water Street in Wiscasset through eminent domain, beginning the proceeding shortly after the building’s tenant, Midcoast Conservancy, exercised its option to buy the building.

The DOT filed a notice of condemnation April 5, a legal notice announcing the department was taking the Haggett Garage, owned by Coastal Enterprises Inc., through eminent domain.

On March 24, the Midcoast Conservancy Board of Directors voted unanimously to exercise its option to buy, which was part of its lease agreement with Coastal Enterprises Inc., Executive Director Jody Jones said. The option was not set to expire until March 31.

The Haggett Garage has long been identified as the best alternative spot for parking in the plans for the DOT’s traffic project in downtown Wiscasset, DOT spokesman Ted Talbot said. The tenant’s decision to exercise its option made the DOT’s acquisition of the property urgent, he said.

The DOT paid CEI Inc. $408,000 for the property, which was the building’s fair market value and approximately the same price Midcoast Conservancy would have paid, said Elizabeth Rogers, CEI’s marketing and communications director.

The department will work with Midcoast Conservancy to find a comparable space and help with moving and other costs, Talbot said.

However, relocation is not the subject of the conversation Midcoast Conservancy is hoping to have with the DOT, Jones said.

“My hope is that they’ll work with us to find a solution where we can continue to have a home here,” Jones said. “We’ve made great strides in this area and we want to continue to be a part of this community.”

The Haggett Garage has served as Midcoast Conservancy’s headquarters since January 2016. For the past year, the organization has explored other properties in town, but none are better suited to the organization’s needs than its current location, Jones said.

The building is solid, the utility costs are low, and the building’s meeting space has allowed the organization to provide the community with an art gallery, a meeting space, and a hub for Midcoast Conservancy’s ski program, which provides skiing equipment for children, Jones said.

The timing of the board’s vote was due to the amount of time it took to secure the financing to purchase the building, Jones said.

Midcoast Conservancy is a “newcomer” to the conversation about the DOT traffic project, and the goal is “not to upset the apple cart,” Jones said. However, Midcoast Conservancy would like to speak with the DOT to see if there are other, possibly better, alternatives for parking than the Haggett Garage, she said.

The Haggett Garage is an integral part of the DOT’s traffic project in Wiscasset, Talbot said. The removal of on-street parking on Main Street between the intersections of Water and Middle streets is “crucial to the mobility” of Main Street traffic, he said.

“This was not a sudden decision,” Talbot said. “We moved ahead with the acquisition so the owner and the tenant would not be in limbo.”

The embattled DOT project in Wiscasset is the subject of a lawsuit, a citizen’s petition, and criticism from members of the Wiscasset Historic Preservation Commission.

The elimination of on-street parking on Main Street and the planned demolition of the Haggett Garage, one the earliest automobile dealers in Wiscasset, to create a parking lot have been among the more controversial elements of the project.

The historic preservation commission has argued the Haggett Garage, built in 1916, is an important historic structure that should be preserved. The building was not considered a historically significant structure in a survey of historic properties in the village, however, due to the building’s extensive renovations over time.

An attorney is currently reviewing the organization’s legal rights in the situation, Jones said. Midcoast Conservancy does not want an adversarial relationship with the DOT, but would like to have a conversation that may result in a solution that benefits everyone, she said.

CEI owns two buildings across the street from the Haggett Garage, which are vacant and also listed for sale, Jones said. The buildings do not have the same amenities as the Haggett Garage and do not meet the organization’s needs, but would make a nice parking area, she said. “The bottom line is, we want a discussion,” Jones said.

The Midcoast Conservancy planned to hold an open house Wednesday, April 19 from 5-7 p.m. to discuss the situation and possible alternatives, Jones said.