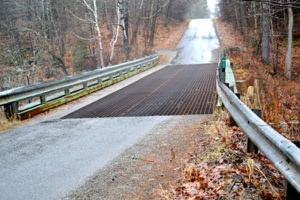 The Northy Bridge in December 2015, days before it was permanently closed to vehicular and pedestrian traffic. (Abigail Adams photo, LCN file)

Howe Road residents and local and state representatives peppered six DOT officials with questions about Northy Bridge at a public hearing that preceded the Whitefield Board of Selectmen’s Tuesday, June 21 meeting.

Several residents expressed anger about the bridge’s closure, asked why the bridge was allowed to fall into disrepair, and asked if the DOT would assist the town in constructing a pedestrian bridge to enable at least foot traffic to cross the West Branch of the Sheepscot River.

The DOT gave notice in early December 2015 the Northy Bridge was no longer safe for vehicular traffic; days later the bridge was closed. Brian Nichols, senior technician with the DOT bridge program, provided an overview of the deterioration that has left the Northy Bridge in danger of failure, and the DOT’s plans for the bridge’s removal.

According to Nichols, the primary problem with Northy Bridge is its superstructure, or the steel beams and open grid cars cross; however, the bridge’s substructure, or foundation, has gaping holes in it, leaving it in danger of collapse once the top of the bridge is removed.

Due to the listing of the West Branch of the Sheepscot River as a natural habitat of Atlantic salmon, the DOT is going above and beyond what it usually does in removing a bridge, Nichols said. The DOT plans to remove the bridge and its abutments and restore the stream bank so it will appear as if the bridge was never there, he said.

The DOT plans to request bids in July, begin construction in August, and complete work by November, Nichols said. The total cost of the project is estimated to be $250,000.

North Howe Road resident Jerry Brann questioned the DOT’s analysis of the bridge’s safety, asked why the DOT is not going to repair the bridge, and expressed suspicion that the conservation groups involved in the Coopers Mills Dam removal project influenced the DOT’s decision to remove Northy Bridge.

Howe Road residents expressed anger about the DOT allowing the bridge to reach its current state of disrepair. Residents in attendance also questioned whether the Coopers Mills bridge, which is also a state-owned bridge, is in danger of a similar fate.

Selectman Tony Marple and state Sen. Chris Johnson, D-Somerville, asked about the possibility of the DOT working with the town to build a footbridge; removal of the bridge’s substructure and abutments could make a footbridge unlikely.

“Can you work with us on this concept? The state needs to show some flexibility,” Marple said.

According to DOT Deputy Commissioner Jonathan Nass, the DOT recently engaged in an in-depth study of the state’s 2,811 bridges, many of which are in need of repairs the DOT does not have the funding to make.

Due to the relatively low amount of vehicular traffic on Howe Road and the close proximity of a detour, the Northy Bridge was a low priority and did not qualify for the DOT’s limited funding. The Coopers Mills bridge meets different criteria and will not be closed, Nass said.

“If it was my road, I wouldn’t be happy either,” Nass said. However, the decision to remove the Northy Bridge is one the DOT is standing by, he said. “We want to be flexible in other ways, but we’re not leaving the substructure,” Nass said. “We’re taking them out.”

If the town is interested in investing the money to install a pedestrian bridge, there are steps the DOT can take in its stream-bank restoration to make it easier for the town in the future, Nass said. The DOT currently plans to remove the pavement leading up to the bridge site and put a walking trail in its place.

The DOT is also willing to replace the guardrails that currently block the entrance to the bridge with boulders, a proposal selectmen later decided to move forward with.

Selectmen also later decided to install picnic tables at the end of South Howe Road by the former bridge site once construction is complete.

The Northy Bridge was built in 1936. A bridge with an open grid and a steel beam superstructure normally survives for about 75 years, Parlin said; the Northy Bridge is 80 years old.

“This bridge has lived its life,” Parlin said.