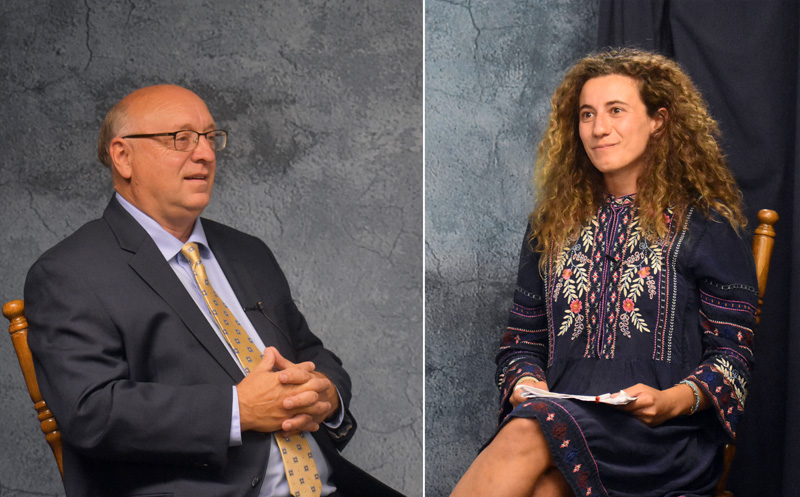 The candidates for Maine Senate District 13 discuss how Maine can recover from the economic impact of the coronavirus pandemic and their legislative efforts to promote renewable energy in a forum set to air on Lincoln County Television at 8 p.m., Thursday, Oct. 8.

State Sen. Dana Dow, R-Waldoboro, and State Rep. Chloe Maxmin, D-Nobleboro, are the candidates for the district, which represents all of Lincoln County except Dresden, plus Washington and Windsor.

The forum will be the last of nine to air. The Lincoln County News is hosting the forums in partnership with LCTV. J.W. Oliver, editor of the LCN, is moderating the forums.

Dow said he favors a system that would limit the impact of boom-and-bust cycles on Maine, evening out the “waves” and “troughs” that come with each.

“We need a tax system that is much more stable over time than the one we have right now. We rely a lot on income tax on construction and sales tax on tourism,” Dow said.

Dow wants the state to simplify income taxes to allow for businesses to grow and invest in their employees.

“We need a flat tax where everyone pays the same rate. We used to laugh at Massachusetts, but they have their act together and have a 5% flat tax,” Dow said.

“It is important to have a good public health strategy so we can safely reopen,” Maxmin said.

Regarding tax reform, Maxmin said the Legislature should end tax loopholes and wealthy residents need to shoulder their fair share of the tax burden.

“It’s not socialism to pay your fair share. Working-class people are paying more than their fair share,” Maxmin said.

Maxmin sees the state’s cost of living as pushing professionals out of the state.

“I think any Mainer, anyone in District 88, will say taxes are one of the biggest burdens of living in or moving here,” Maxmin said.

Both candidates discussed legislation they have championed to bring renewable energy and the jobs that come with the emerging industry to Maine.

Dow said his solar bill, L.D. 1711, created jobs throughout the state, allowing medium-sized solar companies to start up and grow.

“It put Maine on the map for solar projects, took the handcuffs of regulation off,” Dow said.

Though the terminology may remind people of Washington, D.C., Maxmin said her bill will create jobs and apprenticeships on clean energy projects in Maine. The bill also promotes a just and equitable transition from fossil fuels to renewable energy, she said.

“The idea is to treat all Mainers fairly and equitably,” Maxmin said.

The forum will air on LCTV — Channel 7 — and at lctv.org.