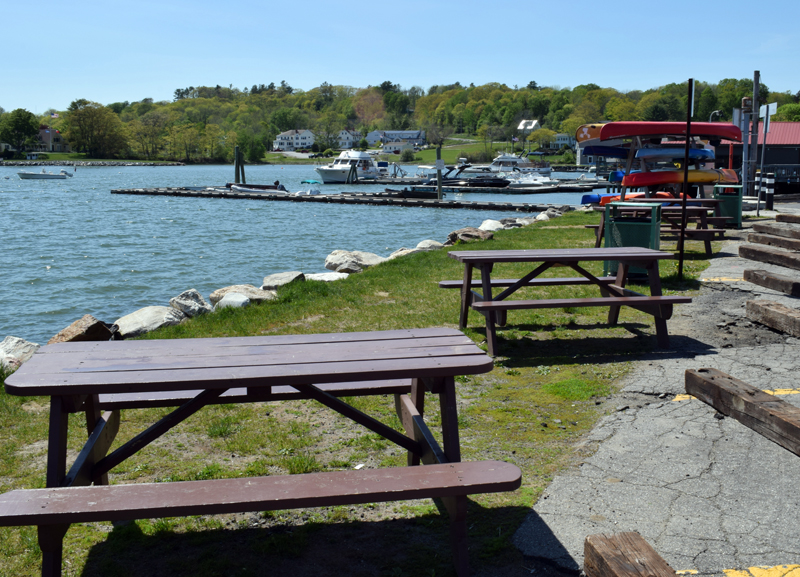 Picnic tables are available for outdoor dining along the Damariscotta waterfront. The town of Damariscotta provided the picnic tables in response to a request from downtown business owners and is considering their request for an open-air market. (Evan Houk photo)

Some downtown Damariscotta merchants hope to transform the Twin Villages into an open-air market at least once a week.

The Damariscotta Board of Selectmen expressed support for the concept Wednesday, May 20, but Selectman Lou Abbotoni said they need to see a detailed plan for how it would work.

Abbotoni suggested that the coalition of business owners and the Damariscotta Region Chamber of Commerce, who introduced the concept, present the plan to the selectmen Wednesday, June 3.

“I think that the business owners and the chamber have to come back to us with a better, well-thought-out plan before we can do anything,” Abbotoni said.

Susan Murphy, owner of Cupacity and the Gilbert E. Gay building, and Lisa Hagen, of the Damariscotta Region Chamber of Commerce, presented a tentative plan to close off parking spaces on Main Street for at least one day each week in order to create an open-air shopping environment that would allow more space for physical distancing during the COVID-19 pandemic.

Murphy said they plan to approach the town of Newcastle as well in the hopes of creating an open-air market along Main Street in both of the Twin Villages.

Hagen said the tentative plan would close off all Main Street parking spaces to serve as a pedestrian walkway, except for handicapped spaces, and use barricades or cones to give business owners an outdoor area on the sidewalk to showcase their wares. She suggested setting up sanitizing stations and port-a-potties for shoppers.

Damariscotta Police Chief Jason Warlick has said closing off the parking spaces and setting up barricades would not create any safety issues, according to Town Manager Matt Lutkus.

The town has already taken some steps to aid downtown business owners during the coronavirus emergency.

The town has posted signs to identify certain parking spaces on Main Street as 15-minute spaces for curbside pickup and has set up picnic tables in Riverside Park where people can eat takeout meals, according to Lutkus.

Lutkus said the downtown business owners who approached him about the idea agreed to periodically sanitize the tables.

Selectman Mark Hagar suggested that the town buy metal barricades, so it can rent them out to recoup its investment.

Board Chair Robin Mayer said the town could look into the cost of barricades while awaiting the June 3 presentation.

Hagen touted the plan as a way to attract residents of neighboring towns into Damariscotta to shop and eat – and hopefully compensate, in part, for what is shaping up to be a lackluster tourist season.

“We don’t know if it’s going to work, but nothing ventured, nothing gained,” Hagen said, suggesting that the town could try the concept for a month to see how it goes.

As downtown businesses begin to resume customer-facing operations, with precautions, in Damariscotta and across Lincoln County, Murphy and Hagen see an open-air market as a way to make customers feel safer.

“Let’s get people back in our community, engaged, and try to give whatever we can in terms of a boost to the local businesses that are suffering greatly,” Hagen said.

Murphy said she recently started talking to local business and restaurant owners about their concerns regarding a drop in business and fewer tourists due to COVID-19, the respiratory illness caused by the coronavirus.

“Basically I said, ‘Look, the pie is going to be smaller. How do we work together to reach out to the people that live here all the time in the surrounding towns? And how do we have an event that sort of gives people relief? Because not everybody’s going to be comfortable going to a restaurant or going into a store,’” Murphy said.

Murphy learned that Rockland was moving forward with a plan to close off Main Street on certain days for an open-air market, which sparked the idea.

Brunswick is also in the early stages of a plan to close off parking spaces on Maine Street to create a makeshift pedestrian walkway for outdoor dining or shopping options, The Times Record reported May 20.

Murphy said she and Hagen have contacted several retailers and restaurant owners about the idea and have received mostly positive feedback.

“My experience is that people are open to it,” Murphy said. People have questions about the logistics and timing. “And, of course, there are some businesses who are not in favor of it because they don’t see it as beneficial to them,” she said.

Hagar and Selectman Josh Pinkham expressed concern that businesses outside the downtown may feel left out and wanted to ensure that all Damariscotta businesses support an open-air market.

Murphy suggested allowing businesses from other areas of town to participate as vendors. The market would take place one or two days each week for a set time period.

Hagen, in a phone interview the day after the meeting, said the next steps will be to elicit more feedback from the business community and develop a detailed plan to present to the selectmen June 3.

Mayer, in a phone interview Friday, May 22, said she supports the idea, but there are questions about how to execute the plan – such as how to close the parking spaces, whether part of Main Street will be closed, liability questions, and whether all businesses in Damariscotta are in favor of such a plan.

“The particulars of how this might work would be up to the businesses and the business community and what they decide on and the final presentation to the selectmen,” Mayer said at the meeting.

She said the town could facilitate the creation of an open-air market by relaxing or eliminating permit restrictions for street vendors.

Adam Reny, of the Newcastle-based Renys department store, which has two locations in downtown Damariscotta, also spoke to the plan for the market at the May 20 meeting.

Reny suggested allowing the open-air market to operate only during certain hours and limiting the market to the downtown.

“I think we’re going to have summer traffic. I don’t think it’s going to be a dead town,” Reny said.

In addition to Rockland, the Portland City Council approved a plan May 18 to close off several streets in the Old Port to accommodate outdoor dining and retail sales. The street closures will take effect June 1. Physical distancing guidelines and other safety guidelines from the Maine Center for Disease Control and Prevention will still need to be met.