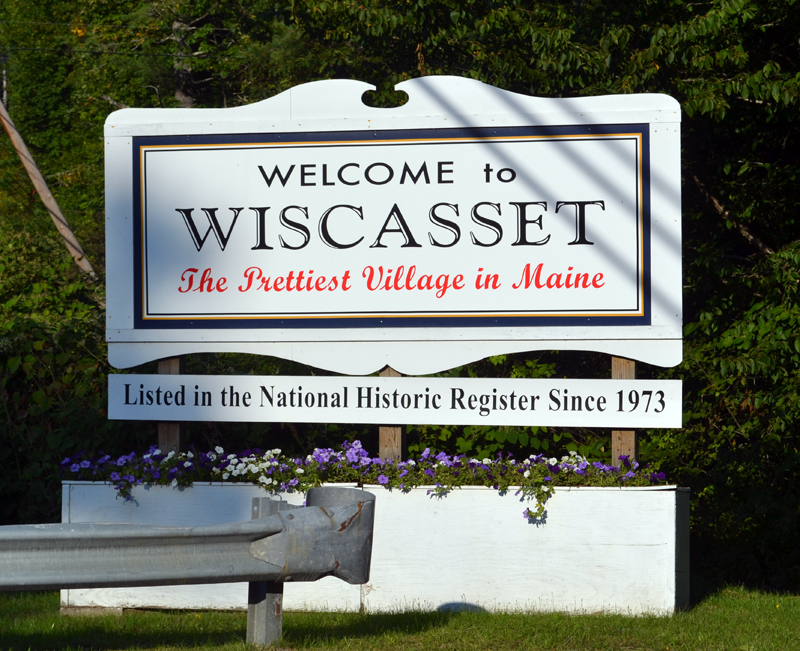 The sign at the entrance to downtown Wiscasset on Tuesday, Sept. 12. (Abigail Adams photo)

Downtown Wiscasset, the Waldo Theatre, and the Wiscasset Historic Preservation Commission are among the entries on Maine Preservation’s 19th list of most endangered historic places in Maine.

The list aims to start conversations and mobilize resources to protect historic entities in danger of being lost, said Sarah Hansen, real estate manager for Maine Preservation, a Yarmouth-based nonprofit devoted to protecting and promoting historic sites in Maine.

Wiscasset has a “well-deserved” reputation as having some of the most significant historic architecture in the state, said Greg Paxton, Maine Preservation’s executive director. The Wiscasset Historic Preservation Commission is listed as endangered due to an upcoming town vote on whether to repeal the historic preservation ordinance, which created the commission, he said.

The commission is just beginning to establish itself, Paxton said. The actions of the town to repeal the ordinance are based on “just one complaint from a homeowner who had demolished a historic fence without review,” according to Maine Preservation’s endangered places list.

The Wiscasset Board of Selectmen has received several complaints from homeowners about the commission’s handling of their applications, Chair Judy Colby said. Selectmen have also said the commission is an unnecessary level of government.

The commission is integral to protecting the integrity of Wiscasset’s historic district, Paxton said. The commission is charged with reviewing construction and renovation projects in the district. The review is needed to prevent alterations that would change the historic character of the properties that make Wiscasset a historically significant location, he said.

“The question is, does Wiscasset want to retain that or does it want to see it erode?” Paxton said. “What may seem at the moment to be a small change” can have a significant impact, he said. “Small change after small change and a building can lose” its historic significance.

Local historic commissions have been shown to increase the property value of not only historic properties, but also the properties around them, Paxton said. The commissions “are an economic development boon to their communities,” he said.

Maine Preservation also lists downtown Wiscasset as endangered due to the Maine Department of Transportation’s traffic project slated for the area. The Maine Preservation listing for downtown Wiscasset includes many of the objections often stated by project opponents, such as the elimination of parking on Main Street, the use of eminent domain to take ownership of Haggett’s Garage, and choosing to forgo federal funds in order to side-step historic preservation standards.

“Without federal dollars, environmental and historic review processes are being avoided. Condemnation has been used to acquire property and displace a thriving office, and the City of Wiscasset will end up footing the bill for maintenance of many design elements,” according to Maine Preservation.

The elimination of parking “will have a devastating effect on the businesses there,” Paxton said. While the Haggett Garage, which will be demolished for a parking area in the current plan, is not eligible for the National Register of Historic Places, it is occupied, and the plan will displace the current tenants.

Maine Preservation is in favor of a solution that will alleviate traffic congestion in downtown Wiscasset, Paxton said. The concern is that the current traffic proposal has not been adequately tested, he said.

Hansen said that Maine Preservation would like to see the DOT first test its traffic plan by temporarily installing traffic lights and blocking off parking on Main Street.

The DOT “takes very seriously the consideration of impacts to historic places and properties in its decision-making,” department spokesman Ted Talbot said. Maine Preservation never contacted the department, he said.

The organization did not “obtain any facts or comment regarding the project and thus failed to recognize the extensive federal historic review and alternative cost analysis that has taken place over the last year,” Talbot said.

Maine Preservation has had no formal communication with the DOT, but plans to, Paxton said. Wiscasset’s historic district is one of the first to be listed on the National Register of Historic Places, which is an indication of how important the historic district is to the community, he said.

The Waldo Theatre is “a beautiful building and a community anchor” that previously served as an entertainment center for the Midcoast, Hansen said.

The theater opened during the Great Depression in 1937 and still contains its original seating, she said.

The original owners sold Waldo Theatre in 1957 and it remained vacant until 1986, when new owners reopened it. The nonprofit Waldo Theatre Inc. has managed the theater since 2006, but lack of funding and maintenance issues forced the theater to close again in 2014, according to Maine Preservation.

New board leadership has revitalized the effort to repair and reopen the theater. There is “tremendous energy” on the board, which is in the midst of developing a fundraising and business strategy with the goal to open the theater in 2019, Hansen said.

The group “needs continued community and financial support in order to ensure the reactivation and preservation of this cornerstone of culture and entertainment,” according to the list.

The Waldo Theatre Inc. Board of Directors was excited about Maine Preservation’s recognition of the theater as a property worth preserving, Chair Melissa Smith said.

“We’ve been steadfast in making a case for the renovation and revival of the Waldo Theatre,” Smith said. “The benefits to the community and surrounding areas are numerous. And being recognized by Maine Preservation as a historic property worth saving really sings praise to all the hard efforts done by volunteers over the last few years.”

The board is in the midst of a fund drive with future events to be announced, Smith said.

“Walking around the auditorium, standing on the stage in dim lights gives you goosebumps,” she said. “It’s a magical building with so much potential.”

Maine Preservation compiles its annual list of endangered historic places from nominations by the organization’s staff and the greater community. The list has helped mobilize support and preserve sites that would otherwise have been lost, Hansen said.

Since the list was created, 82 of the 122 sites named on it have either been saved or are in the process of being saved, Hansen said. “We’ve had a great track record,” she said. The list “has been a really positive tool.”