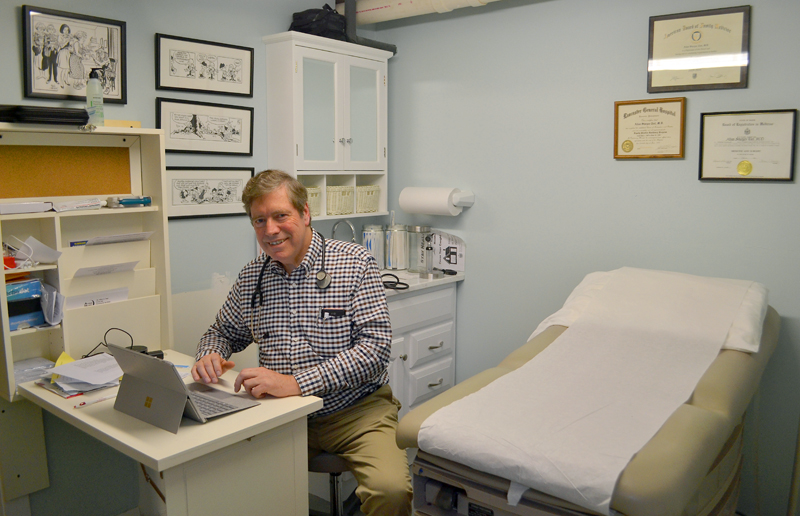 Dr. Allan “Chip” Teel in the examination room of his new medical practice at Hodgdon Green in Damariscotta. Teel recently returned to his work as a primary-care physician. (Maia Zewert photo)

Dr. Allan “Chip” Teel, of Nobleboro, recently returned to his roots as a primary-care physician with a small medical practice operating out of Hodgdon Green in Damariscotta.

Over the past three decades, Teel, of Nobleboro, has had a multifaceted career in health care, including as a primary-care physician and co-founder of the ElderCare Network of Lincoln County and Full Circle America.

More recently, Teel joined Eastern Maine Health Systems, a health care system made up of providers across the state, as the medical director for clinical systems innovation.

At the time, Teel was excited to help shape elder care on a larger scale, however, the new position “just didn’t work out” as expected, he said.

“The sponsor who nominated me had a vision of what the organization was ready for, and I don’t think they were quite there yet,” Teel said. “To have the courage to completely change some of the elements of health care delivery, especially with elder care, requires teamwork as you head into the unknown. And I think it was just a little too unknown.”

After Teel left Eastern Maine Health Systems in May, he considered what he wanted to do next while spending more time at the ElderCare Network’s “Greens,” residential-care facilities that offer “home-like living” in Boothbay, Damariscotta, Edgecomb, Jefferson, Round Pond, Waldoboro, and Wiscasset.

The ElderCare Network of Lincoln County, which will celebrate its 20th anniversary this summer, currently serves 60 residents in the seven locations.

While speaking with residents, Teel realized he “very much missed” delivering relationship-based primary care in the local area, something he had done since his family moved to Lincoln County in 1988. He decided to open a small practice focused on the elderly in office space in the Hodgdon Green building.

The practice is the second Teel has started in Damariscotta. The first was Full Circle Family Medicine, which he co-founded with Dr. Minda Gold and Dr. Denise Soucy in 2003. The practice closed in December after the departure of both Teel and physician’s assistant Ingrid Sherrill.

“When I announced my impending departure, it triggered a lot of changes, but everyone has since landed on their feet,” Teel said. “However, I am remorseful for having triggered the end of Full Circle. It was an important, 14-year effort that is no more.”

The elderly face many challenges when it comes to accessing health care, with transportation and payment at the forefront, Teel said. To make his practice accessible, Teel is accepting Medicare and MaineCare, and offering some unique methods to connect with his patients.

As with Full Circle America, the Nobleboro company Teel founded to help elders stay in their homes longer, Teel utilizes technology in his practice to better serve patients. Teel’s new medical practice is operating under the name Access Health as a subsidiary of Full Circle America.

With 80- and 90-year-olds using applications to video chat with their grandkids, the patients are already used to using the technology, Teel said. “So then the question becomes, how do we use that for a medical appointment?” he said.

While there are still some challenges to telemedicine, such as a lack of diagnostic tools, the experiment has received positive feedback from patients, Teel said.

“I had one patient who said it was much more intimate, which isn’t something you would expect to hear when you’re working with someone over the computer,” Teel said. “She didn’t have to leave her house, she remembered what she was going to ask me, and she was comfortable.”

Teel began quietly seeing patients in mid-November. Word quickly spread, however, and he soon received calls from many former patients who wished to return to his care.

“Most of the first office visits have been catching up and hugs,” Teel said. “It’s heartwarming to be accepted back in such a way.”

In addition to the practice, Teel is available to provide short-term care for residents of the Greens.

“I’m not insisting, demanding, or suggesting that someone has me as their doctor, but I’m available as eyes and ears for someone’s regular doctor,” Teel said. “It’s potentially a huge advantage to have a doctor in house to call on to deal with things and possibly prevent someone from having to be driven to the ER or to urgent care.”

While other physicians in the community have expressed willingness to help Teel with his new endeavor, “there is a lot of work that needs to be done to make this model successful before someone else comes on,” he said.

“This can all be a labor of love for me, but if anyone else were to come along, I would want to make sure it works first,” Teel said.