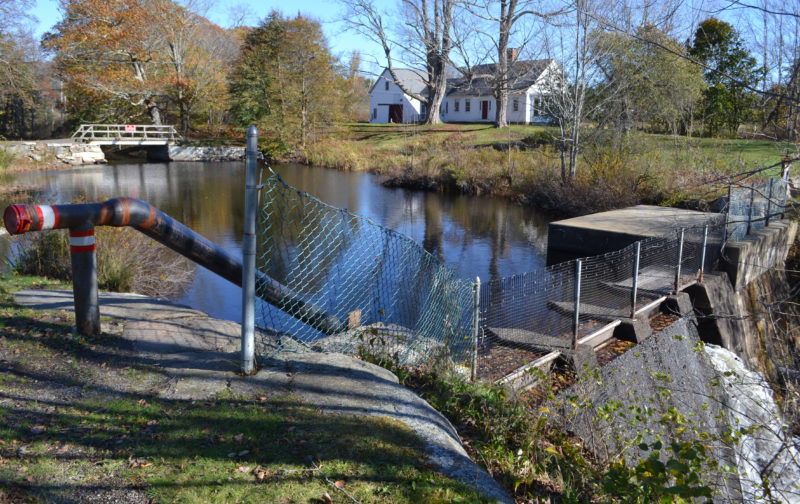 The first draft of the feasibility study report about the Bristol Mills Dam is now available on the town’s website. The study includes three possible outcomes – the repair of the dam, the partial removal of the dam, or the complete removal of the dam with a water-level management structure – as well as preliminary cost estimates for each.

The draft report by engineering firm Wright-Pierce was presented to the Bristol Mills Dam Advisory Committee at its meeting Oct. 24 and posted on the town website later that week.

The discussion about the future of the Bristol Mills Dam began in August 2016, after the town received notification that it did not receive a grant to help finance improvements to the fish ladder. The estimated project cost, including the work on the fish ladder, improvements to both the spillway and dam, and the development of an emergency action plan, was $370,000.

After having several conversations about the future of the dam and the fish ladder, including whether the town should fund improvements or remove the dam, the selectmen voted to move forward with a feasibility study funded by The Nature Conservancy.

The conservation organization, through its Maine chapter, agreed to provide up to $29,900 for the study. The selectmen appointed the Bristol Mills Dam Advisory Committee to work with an engineering firm, Wright-Pierce, to determine the scope of the study.

For over a year, the dam committee and Wright-Pierce have been collecting information about the values the dam provides, including for fish passage, firefighting water supply, recreational uses, and maintenance of upstream water levels. The committee also compiled previous studies conducted about the dam and the hydrologic and hydraulic conditions at the site in the Pemaquid River.

Annually, the first option would require an estimated $6,000 for general maintenance and repairs. Future capital investment, such as the repair of the dam and fishway, is estimated at $50,000 in 20 years.

The initial costs, annual maintenance costs, and future capital investment combine to an estimated cost of $865,000 over a 50-year period.

The second option would remove the dam and replace it with other water-control structures. The removal, which would require minimal maintenance and allow for full fish passage, would provide “the most effective and efficient passage of fish,” according to the report.

However, the option would impact some of the dam’s other features, including its use as a source of firefighting water for Bristol Fire and Rescue and its recreational uses, including swimming.

The Bristol Mills Dam Advisory Committee and engineers with Wright-Pierce met with representatives from both Bristol Fire and Rescue and the Bristol Parks and Recreation Commission to come up with alternative sites if the second option is selected.

According to the report, members of Bristol Fire and Rescue said a redesign of Ellingwood Park would be satisfactory and allow for water to be pumped at the same rate as at the Bristol Mills Dam impoundment, however, it would not allow for fires in the village to be reached by hose and would result in an increase of driving distances.

The swimming hole would also relocate to Ellingwood Park if the second option is selected. The park would need enhancements, including the construction of a new platform, stairs, and dock; additional parking, and improvements to the boat launch area, according to the report.

The initial capital costs for the second option are estimated at $610,000. The cost includes the demolition of the existing dam for $100,000, the construction of the nature-like fishway for $170,000, and improvements to Ellingwood Park for the firefighting water supply and recreational uses for $80,000 and $260,000, respectively.

The second option would require an estimated $1,500 in annual maintenance costs and future capital investment of $50,000 in approximately 50 years.

The initial costs, annual maintenance costs, and future capital investment combine to an estimated cost of $735,000 over a 50-year period.

The third and final option is partial dam replacement, in which a portion of the Bristol Mills Dam would be removed, reducing the water level at the dam by 5 feet. The dam would remain approximately 8 feet tall, which is “a bit too large to practically overcome with a reasonably sized nature-like fishway,” according to the report.

While it may be possible to remove a portion of the existing dam, it “is likely more practical” to demolish the dam and construct a new, smaller dam in the same footprint, according to the report.

The recreational swimming opportunities would be diminished as a result of the lower water level, and the enhancements to Ellingwood Park would still be warranted, according to the report.

The third option would also require the construction of a nature-like fishway at the Benner Road bridge to preserve the recreational and wildlife values upstream.

The initial capital investment for the third option would be between $920,000 and $1.26 million. The cost includes the demolition of the existing dam for $100,000, reconstruction of a new dam structure for $350,000, fishway construction at the dam for $300,000, and fishway construction at Benner Road for $170,000. Potential improvements at Ellingwood Park for firefighting water supply and park enhancements would add approximately $80,000 and $260,000, respectively.

The initial costs, annual maintenance costs, and future capital investment combine to an estimated cost of $1.42 million to $1.76 million over a 50-year period.

The report also includes possible reasons as to why alewives are not climbing the fish ladder at higher rates, including difficulty entering and traveling through the fishway and the fish being “not adequately attracted” to the entrance. The annual management of the fishway, which does “improve the annual number of successfully migrating fish,” is not likely to be sustainable over time, the report says.

The Bristol Mills Dam Advisory Committee will continue to review the report at its meetings Nov. 14, Nov. 28, and Dec. 11. A public hearing on the report will take place in early 2018. The committee typically meets at the town office at 6 p.m.

The Bristol Board of Selectmen will later decide how to present the matter to voters at the annual town meeting in March.

To read the full report, go to bristolmaine.org.