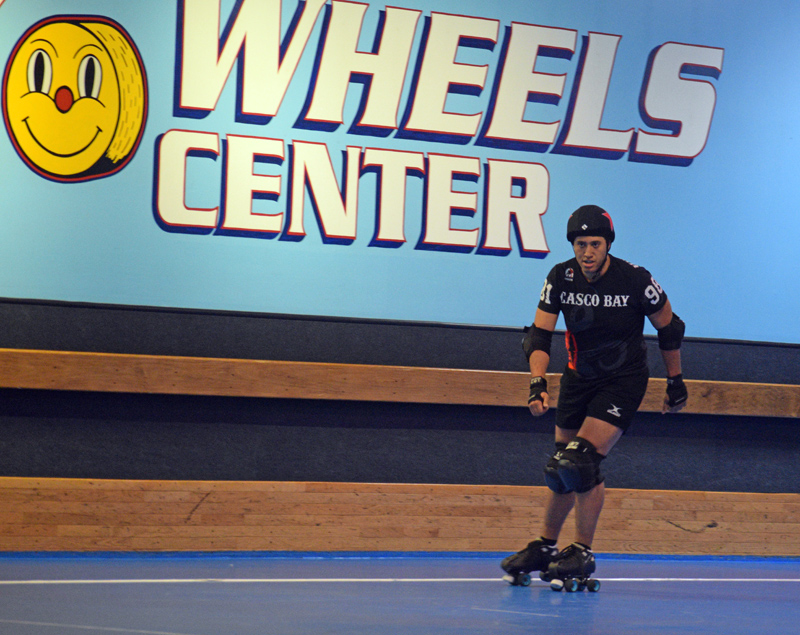 Michael “Hurry Kaine” Henderson skates for Casco Bay Roller Derby during a home game at Happy Wheels Skate Center in Portland on April 6. Henderson is the administrative assistant for the town of Dresden and a “jammer” on the roller derby track. (Jessica Clifford photo)

By day, Michael Henderson is the administrative assistant for the town of Dresden. After work, he trades in his loafers for a pair of roller skates and competes in the high-speed, physical game of roller derby, going by the skate name Hurry Kaine.

Henderson is one of about 20 skaters on the all-gender team Casco Bay Roller Derby, based in Portland.

Prior to starting work in Dresden in November 2017, Henderson had begun learning to play roller derby in August of that year. He played in his first sanctioned game just last month.

Though a few Dresden residents know about their administrative assistant’s off-duty activity, most, he thinks, do not.

Henderson’s friends and girlfriend kept asking him to play the sport with them when he lived in Portland, Ore. At first, the former college football and rugby player resisted.

Watching a game between two of the best teams internationally sparked his interest. 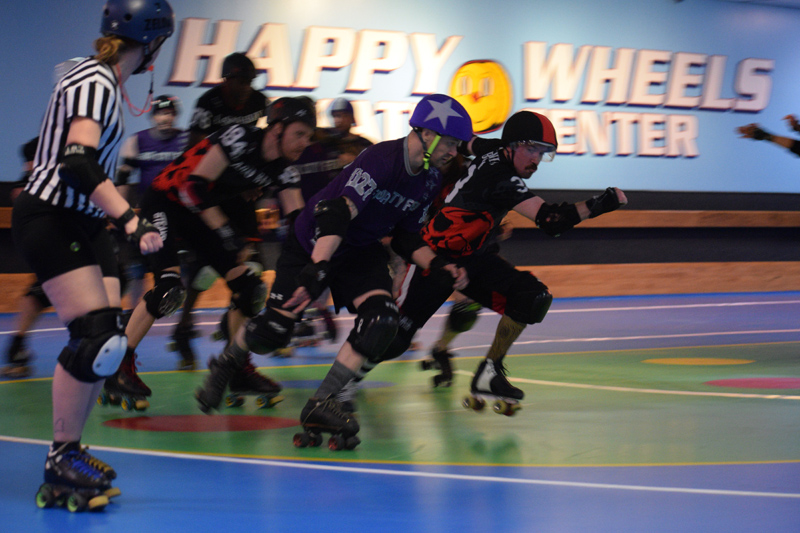 “I started skating more. I wasn’t playing derby,” Henderson said. He had learned to skate as a boy, but had not skated since he was 10.

After mulling over a return to rugby, he picked up roller derby because his girlfriend knew someone on the team.

The sport has evolved since the 1920s, when the term “roller derby” first came into use, initially to describe roller-skating races.

According to the Women’s Flat Track Derby Association, in the ’30s, Leo Seltzer’s touring competition, Transcontinental Roller Derby, shifted from “a marathon skating race on a raised track to a more physical competition emphasizing skater collisions and falls.”

This evolution in roller derby became the foundation for the modern sport.

The sport’s popularity declined, making Seltzer’s son, Jerry, shut down the organization in 1973. 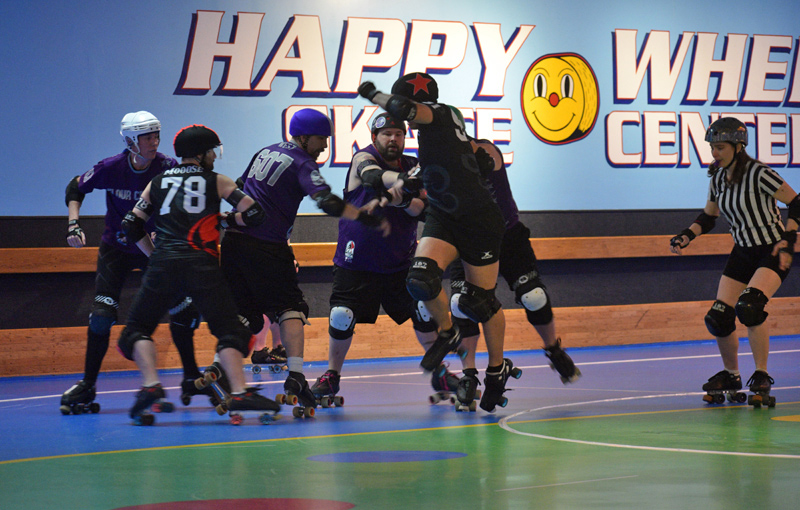 Casco Bay Roller Derby’s Michael Henderson jumps as he tries to establish “lead jammer” position during a game against the Flour City Fear in Portland on April 6. (Jessica Clifford photo)

There were attempts to revive alternative versions of the sport in the ’80s and ’90s, but in the early 2000s, modern roller derby became established in Austin, Texas.

“The flat track version of the sport spread like wildfire in subsequent years,” the association’s website states. There were more than 450 flat track roller derby leagues worldwide by 2010.

Although modern roller derby has traditionally been more popular among female competitors in the Women’s Flat Track Derby Association, a “much smaller” Men’s Roller Derby Association is coed, Henderson said.

Henderson, who is the treasurer of the Casco Bay Roller Derby Board of Directors, said the team is diverse. Skaters range from 22 to about 60 years in age, one-third are women, and various races are represented.

“This is definitely a community I really enjoy, and that’s probably one of my biggest drives to Roller Derby,” Henderson said. 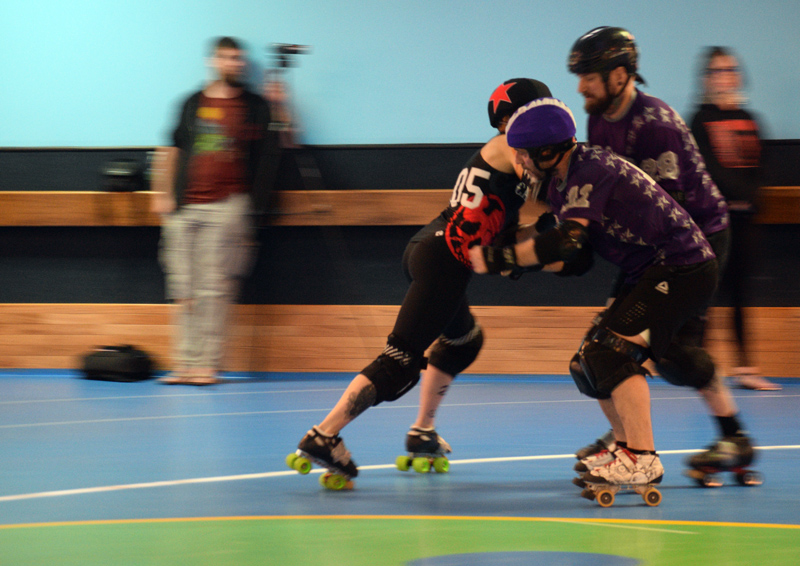 Casco Bay Roller Derby skaters practice once a week year-round, minus the month of July and holidays. Their season runs from February to June.

To compete on a roller derby team, a skater must earn two certifications, Henderson said.

The second certification allows a skater to play in scrimmages and games.

In his short time playing sanctioned games, Henderson has traveled to Massachusetts to compete. There is an upcoming tournament in Pittsburgh.

Henderson plays the position of jammer, the only skater who can score. Jammers wear a star on their helmet. 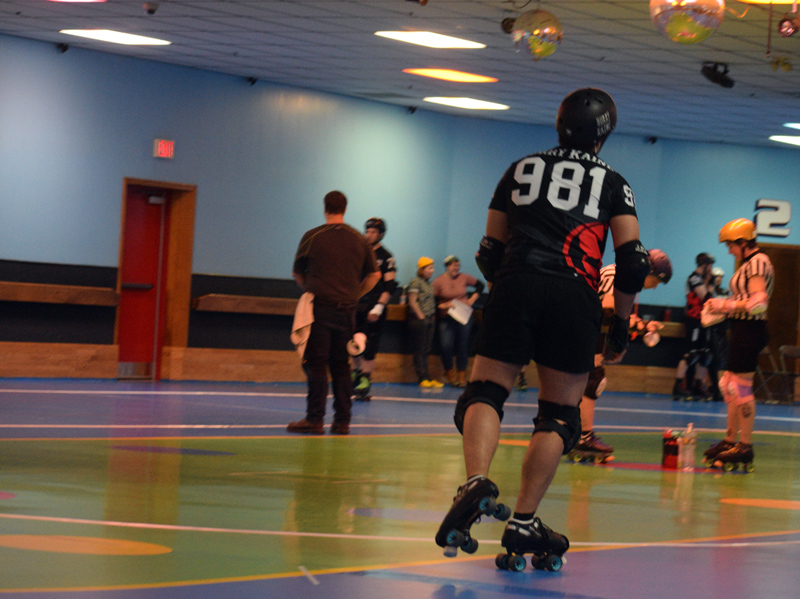 Michael Henderson skates onto the rink before a Casco Bay Roller Derby home game at Happy Wheels Skate Center in Portland on April 6. The back of his jersey bears his skate name, Hurry Kaine. (Jessica Clifford photo)

A modern game of roller derby is played on a flat, oval track over two 30-minute periods. Multiple “jams” can last up to two minutes.

In a jam there are three blockers, a pivot, and a jammer on the track for each team, Henderson said.

According to the Women’s Flat Track Derby Association, the blockers and pivot are known as the pack. Both teams’ jammers are set behind the pack, and must go through the pack and lap the track to become eligible to score points on opposing blockers. Henderson said a jammer can get up to four points per lap.

Unlike many other sports, Roller Derby does not involve the use of a ball to score points.

After making an initial pass, the lead jammer scores points by passing the hips of a player on the opposing team with his or her own hips, Henderson said.

Henderson said he has witnessed some injuries on the track, but the organized sport stresses safety. “If you know what you’re doing, you are playing with other people that know what they are doing, and you’re playing within the rules, then I think it is a fairly safe sport,” he said.

Any illegal or unsafe play could result in a skater going to the penalty box for 30 seconds of “jam-time.”

The team with the most points at the end wins. 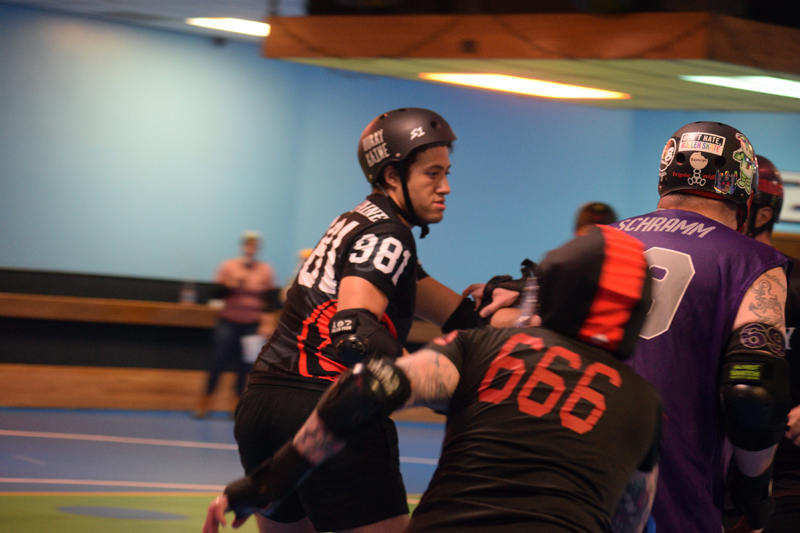 Michael Henderson (left) blocks during a game against the Flour City Fear, of Rochester, N.Y., at Happy Wheels Skate Center in Portland on April 6. Henderson is usually a jammer, but played both jammer and blocker April 6. (Jessica Clifford photo)

It is typical of the sport to have skate names, or nicknames players go by, Henderson said.

“I know there’s been somewhat of a push recently, from the big leagues especially … trying to get the mainstream to see it as a real sport,” Henderson said. “We’re not all dressing up in costumes and having silly names.”

Henderson said he put off coming up with a name for about six months because he was stressed out by the decision. Now he goes by “Hurry Kaine” and wears the name on the back of his jersey.

“A hurricane is a big old force of nature you can’t really control that just destroys a lot of things,” he said. “In all the sports I’ve ever played, if there is one thing I’m good at, it’s being very physical and disrupting a lot of things.”

Skate names “are often shortened, so I wanted something I could shorten well, so I could do Kaine for short,” Henderson said. The spelling of Kaine is a reference to a Spider-Man comic book.

Though it took a little prodding to get Henderson to start the sport, he enjoys playing it for many reasons. 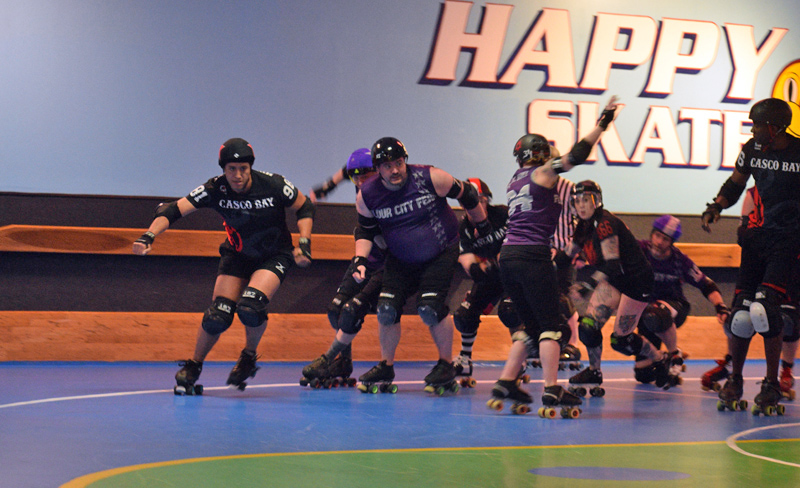 The “number one” reason he likes playing is the Roller Derby community he has met since he started in 2017, and the friends he has made by playing the sport.

When he was younger, Henderson was active almost year-round, playing football, wrestling, and working out.

Roller derby gives him a way to “burn off some energy” in a “regulated and safe” way, he said.

“It seems way more dangerous than it actually is,” Henderson said, because of the certifications required to play.

He also likes the idea of a sport with about 50 competitive active leagues for all genders, since he describes himself as competitive. “Roller Derby is small enough and niche enough you can eventually be the best or close to it,” he said, adding, “There aren’t a lot of sports that you can do that.”

The last reason Henderson gives for his enjoyment of the sport is: “it is one of the few women-dominated sports in the world right now.”

Casco Bay’s best attended games tend to be when they play a women’s-only league. “That is what the sport’s about,” he said.

Henderson likes being part of a “women-centered sport” and experiencing “being there, but not being the main attraction.”