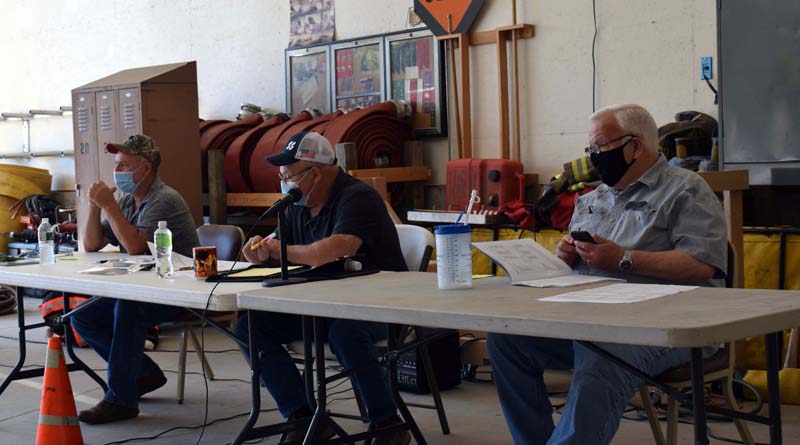 About 29 voters approved Dresden’s $1,014,060 budget during the open portion of annual town meeting, which lasted about an hour and 45 minutes, the morning of Saturday, July 18.

The only article voted down asked if residents would change the time of annual town meeting to Tuesday evenings rather than Saturday mornings.

Moderator Jeff Pierce opened the meeting by welcoming First Selectman John Rzasa back to the board. Rzasa won a four-way race to replace Trudy Foss on July 14.

The budget, which is up $25,367 or 2.57%, is actually less than anticipated because of a few clerical errors and a renegotiation of the town’s snowplowing contract.

For the town’s protection account, the selectmen recommended a total of $142,613, an increase of $16,553 or 13.13%. However, during the meeting, someone noticed that the wording of the warrant article included last year’s protection amount, $126,060.

The $142,613 figure was included in a budget explanation table beneath the article, but not in the actual article.

Pierce, the moderator, said the article could not be amended up, only down.

Third Selectman Allan Moeller said the town may have to hold a special town meeting later in the year to raise funds for the protection account if it is running low.

Erin Bean, deputy director of the Wiscasset Ambulance Service, spoke about an increase in Dresden’s cost for the ambulance service, which accounts for the entirety of the increase to the protection category.

Moeller said the contract price may change in the future depending on the total of unpaid bills.

A renegotiated contract with the town’s snowplowing contractor, Topsham-based Goodall Landscaping Inc., led to an amendment that decreased the amount of Article 11, the highway budget, by $17,194. The contract price was lowered from $217,194 to $200,000.

Article 15 also contained a clerical error, which asked for $14,200 for charitable contributions, less than the $14,775 in the corresponding budget table.

The selectmen said they could potentially use $575 from the board’s contingency account to cover the discrepancy.

In Article 20, voters approved the transfer of $5,000 from the town’s unassigned fund balance to that contingency account.

There was some discussion on Article 17, which asked if voters approved holding annual town meeting on Tuesday evenings rather than Saturday mornings going forward. The article was voted down.

The article included survey results from 39 Dresden residents that showed most of the people who responded would prefer a Tuesday evening. 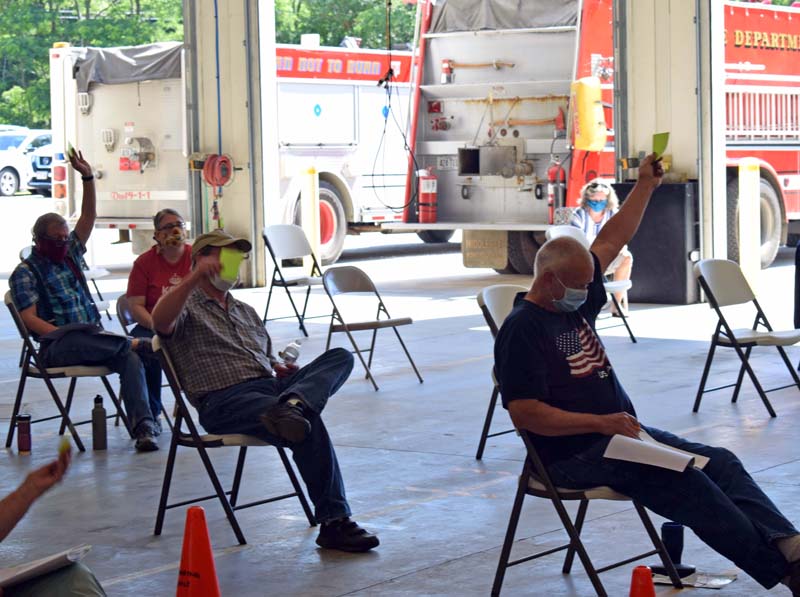 Dresden voters approve an article during annual town meeting at the fire station the morning of Saturday, July 18. The bay doors were open and chairs were set up with physical distancing in mind. (Evan Houk photo)

A handful of residents said they did not receive the survey and expressed frustration at the town’s ability to communicate with residents, citing the lack of response to the survey.

More than half of the residents present raised their hands to indicate that they received the survey and filled it out.

“We need to get out more blanket communications to people in this town. We don’t do a good job of it and we need to do a better job and I think this is a good example,” Gary Blau said.

Town Administrator Michael Henderson said the survey was mailed to about 750 residents in the February edition of the Dresden Communicator newsletter.

There was also some discussion before an amendment was approved for Article 23, which asked voters to approve an interest rate of 9% per year on late tax payments. Voters amended the article to charge 7%.

Henderson said 9% is the maximum the state allows municipalities to charge on late taxes.