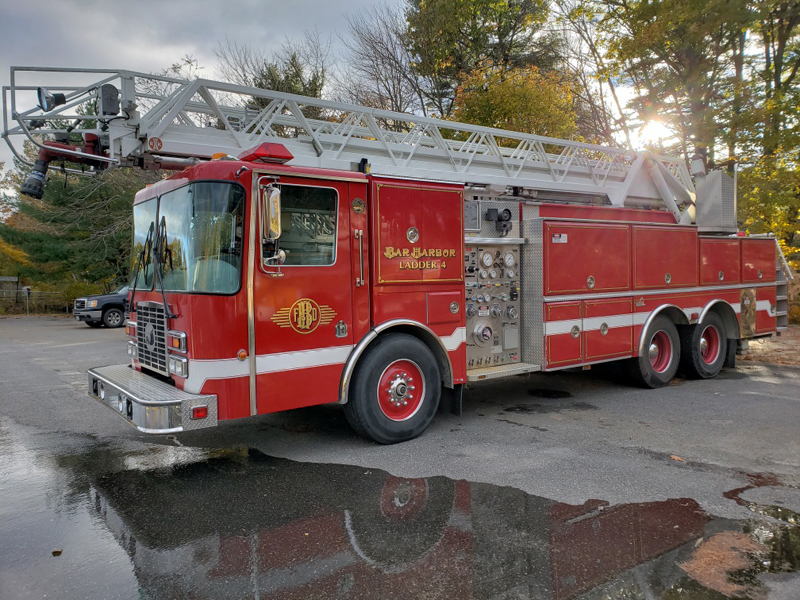 The town of Dresden is considering whether to buy this 1994 ladder truck. (Photo courtesy Steve Lilly)

Dresden Fire Chief Steve Lilly argued for the purchase of a 1994 ladder truck during a public hearing Monday, Nov. 26, but First Selectman Trudy Foss expressed skepticism about the plan.

The Dresden Board of Selectmen plans to consult the town attorney about whether it would have to hold a special town meeting on the proposal to buy the 1994 ladder truck and trade in a 1985 fire engine.

More than 20 people gathered to ask questions and share concerns about the possible purchase at the hearing. The transaction would go through Greenwood Emergency Vehicles LLC, of Brunswick.

The ladder truck in question, originally owned by the Bar Harbor Fire Department, has a 500-gallon tank, a 1,250-gallon-per-minute pump, and a 75-foot aerial ladder.

It would be one of the department’s newest trucks, Lilly said. Training to use it would take a few days.

In order to purchase the $11,000 truck from Greenwood Emergency Vehicles, the department would trade in Engine 5 for $6,000. To cover the balance, the Dresden Fire Association has offered to donate $2,000 and the fire department would take $3,000 from its town-funded budget.

The selectmen previously agreed to sell Engine 5 for $5,000, Third Selectman Allan Moeller said, but it has not sold.

The department maintains Engine 5 as a spare truck, Lilly said.

Many of the people in attendance at the hearing were from the fire department.

“We had this meeting for the public (to see) what they wanted us to do,” Foss said. “If the selectmen had to vote on it, we are probably going to vote no.”

The other selectmen were noncommittal.

“Do I think it’s a great buy?” Moeller said. “Absolutely.”

Second Selectman Dwight Keene asked Lilly questions, but did not express support or opposition to the purchase.

Foss said the tallest building she is aware of in town is 2 1/2 stories.

Earlier in the evening, Foss asked what certification firefighters need to operate the truck and how much maintenance on the truck will cost.

The ladder for the truck would require annual testing. The Richmond Fire Department has offered to split the $1,700 ladder inspection fee.

Lilly said the department would budget about $3,000 for the truck’s maintenance, about $1,500 more than it budgets for a fire engine. However, this does not mean the department will spend this much every year.

Resident Kenneth Perry asked about the life expectancy of the truck.

It should last another 10-15 years with proper maintenance, Lilly said.

“I can’t say we won’t have an issue with it, because it is an older truck,” Lilly said. However, parts are still being made for the truck. The truck has had annual ladder tests and the fire chief in Bar Harbor is compiling its maintenance records.

Resident Dave Probert asked what the department would use the ladder truck for.

The department wants the truck for its usefulness at chimney fires and structure fires, benefit for responses to neighboring towns, and lower insurance rates for the town because of the increase in fire safety.

However, Moeller said the purchase is unlikely to lower insurance rates much.

Another resident asked how the truck would improve the response to chimney fires.

The ladder truck would allow direct access to the fire without a firefighter going on the roof. It would require less manpower, because fewer people are required to set up ladders. Lilly said it takes half the time to use a ladder truck in comparison to a fire truck with regular ladders.

For major fires, the Gardiner and Wiscasset departments have ladder trucks, but Gardiner is often busy and Wiscasset’s truck is often out of service, Lilly said.

“Everything I’ve heard here tonight is extremely positive for the community. It’s a level of safety that is critical for the firefighters,” resident Gary Blau said. “It gives them an edge and is a sense of pride for the community.”