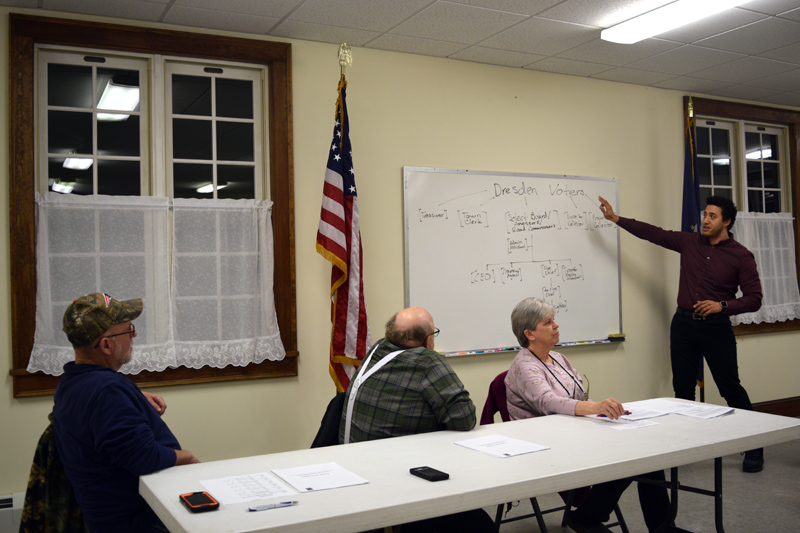 Some Dresden residents fear the town could lose its current office staff if voters approve a change from electing to appointing four positions, although the people who hold the positions support the change.

The residents expressed the concern during a public hearing Monday, Feb. 25. Voters will decide whether to approve the change during a special town meeting at Pownalborough Hall at 6 p.m., Monday, March 11.

The town budgets 11 hours a week for the positions of excise tax collector, property tax collector, and town clerk, and 12 for treasurer. However, Dresden Administrative Assistant Michael Henderson said both Pierce and Storkson work more than those hours.

Residents asked how the transition would affect the current staff.

Pierce and Storkson would have to apply for the jobs like any other candidate and go through an interview process, First Selectman Trudy Foss said.

“It would appear to me that two women that work extraordinary hours and don’t get compensated for it and then, when it comes time for them to move into an opportunity where money could be guaranteed to them, with all their experience and willingness to cross-train, that it would be a terrible loss not to give them a priority to say yay or nay whether I want to do this,” resident Gary Blau said.

In response, Second Selectman Dwight Keene said, “I would expect that we would take into consideration the work that they have been doing.”

However, Third Selectman Allan Moeller said that, in his opinion, if one or both of the current officials does not want to cross-train and go along with the town’s plan, the town would not ask them to stay.

Another resident, Rick Graffam, said he worries that the town could lose two people who have been dedicated to their jobs.

After another question, Foss chimed in on the issue. “I know that Dwight said there is no guarantee that they would get these jobs, but I kind of feel like Allan – our priority is going to go to the girls who do this,” she said.

“We cannot say we can give them priority,” he said. “If they satisfy us as the best qualified person for the position … we can hire them, but we also, by law, have to take into consideration other individuals who might also have credentials that want the position.”

Keene said afterward that he was referring to state law.

Henderson explained how the change from electing to appointing officials would improve the functioning of the town office.

If voters approve the change, Henderson would become the other employees’ supervisor, whereas the current setup does not provide for direct oversight.

The job descriptions would “overlap more,” Henderson said, because both jobs would require the hires to know the other jobs in case one person is sick or on vacation.

“I want customers to come in and do everything all at once, and not have to come back multiple times,” he said.

The office would “prioritize as a single unit” and Henderson said he could delegate tasks to staff.

The jobs would pay $15-$19 per hour. The 30-hour position would come with some benefits because Moeller said state law requires anyone working 30 hours or more to receive certain benefits.

The town would pay employees for training on their days off, Foss said.

Henderson said that if voters approve the change, the town would propose about $53,000 for both salaries and benefits.

The town would post a job announcement April 15 and conduct interviews May 20-29, with plans for the new positions to start June 10.

The selectmen and Henderson would interview the applicants.

“I think we would increase the satisfaction of people coming in,” Henderson said of the change.

“When this was voted on last, the board did not present the issue well and the issues were just presenting themselves to us in the office,” Foss said.

Foss said she thought the hearing went well, but she had hoped for better turnout.